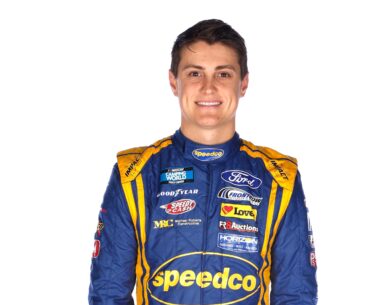 Whenever a driver joins forces with a different team it seems logical to expect there to be an adjustment period to take place before that new combination can begin to enjoy success. That has definitely not been the case for driver Zane Smith and the Front Motorsports team early on in the NASCAR Camping World Truck Series season. As a matter of fact, the new pairing has proven to be the class of the field up to this point in the 2022 campaign.

Following a successful 2021 season that saw Todd Gilliland score a win along with ten top-five and 16 top-ten finishes for FRM, the Bob Jenkins-owned organization opted to move their Truck Series pilot up to the NASCAR Cup Series to race alongside Daytona 500 winner Michael McDowell. That, in turn, created an opening in the driver’s seat of the company’s lone Truck Series entry.

In his first two seasons in the NCWTS, Smith had driven for GMS Racing scoring a total of three victories in the process as well as earning a pair of Championship 4 appearances in the season finale races of 2020 and 2021. Last year’s entry into the title mix came about as a result of a win in the deciding race at Martinsville Speedway, which is the half-mile track where the Camping World Truck Series is headed on Thursday night.

The rising start points out that moving to his new surroundings did take some getting used to at first after having driven for a multi-truck team then moving to a single-truck operation that is housed alongside a pair of Cup Series machines.

“It was definitely really different at first just because I had been so used to only seeing trucks and truck parts and pieces floating around the shop,” Smith compared when speaking to the media via Zoom call. “Now, we’re in a smaller building and we’re surrounded by Cup cars, and the whole Cup world is kind of crazy right now with getting cars, it’s been crazy to see the shop slowly but surely fill up with the new cars.”

Smith began this year by steering FRM’s No. 38 Ford F-150 into victory lane at the Daytona International Speedway after he led the field just after taking the white flag following a green/white/checkered restart in the closing laps. It was the driver’s fourth career win in the series and the second for the team in only its third full Truck Series campaign.

So much for a period of adjustment.

From there, Smith appeared to have finished runner-up in the Truck Series race at the Las Vegas Motor Speedway but that effort was ultimately disallowed by NASCAR when it was deemed that the lug nuts on the truck had been altered. Both the driver and team deny that they took part in any wrongdoing in that case. Nonetheless, an apparent second-place run was ultimately recorded as a last place finish.

Smith then added another top-five on the newly reconfigured Atlanta Motor Speedway. And finally, a late-race shoving match between Kyle Busch, Stewart Friesen and Alex Bowman resulted with all of those drivers falling from contention which lifted Smith to his second win of the season.

During a recent NASCAR Media availability, Smith was asked if he had begun to allow himself to think about gearing up for the NASCAR Playoffs with his team already essentially locked into the championship contending field.

“It’s so early to talk about championship stuff because of the format that we go through,” Smith replied. “I mean, you’ve seen guys that dominate the regular season then when the Playoffs come around they struggle to have things go their way so I’m trying not to get caught up in the too high of highs and trying to enjoy the amount of fun we’re having each and every weekend so far.” 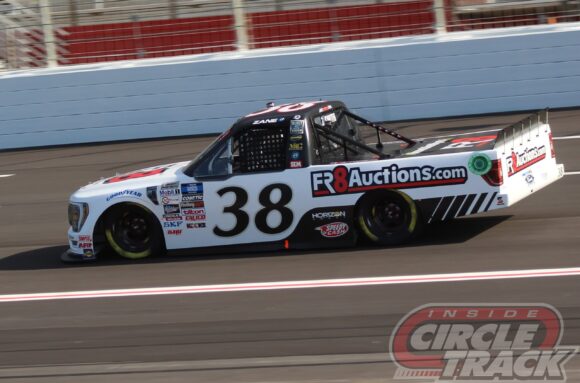 After driving Chevrolets for the past two seasons with GMS, Smith pointed out that his new relationship with Front Row and Ford have been highly beneficial.

“Going back to Ford and being underneath that banner now has been awesome,” he explained. “The simulation tools and everyone I’ve gotten to meet over the past few weeks, or couple of months now, have been awesome to lean on and work with. The simulator time is still extremely valuable even in the normal world, and now we’re coming out of the Covid world, because we’re only getting thirty minutes or an hour of practice so if you don’t have that(practice time) you really lean on your simulation tools and they give us that.”

While his season hasn’t necessarily been perfect, the 22-year-old driver from Huntington Beach, California says team morale is high after the first four races of 2022. And he hopes that wave of momentum will carry into Martinsville this weekend where he won last year by beating out the No. 38 truck.

“I wish we had more stage wins and a few more stage points in general,” Smith stated. “I feel like we’d really be able to approach these races a lot differently. But being locked in, and I think I have more wins than anyone so far this year, has been awesome. It not only boosts my confidence but really my whole team. It’s a lot of fun we’re having each and every week so we’re just trying to enjoy that. I feel like I stole a clock from this team last year so hopefully we’ll get them one this year.”

Although Smith and his team lament the Las Vegas disqualification, they are still bolstered by their current place in the standings.

“I’ve always wanted to win that, the Truck Series, from the get-go,” he insisted. “It’s definitely something on our minds. We’ve already taken our hit to the gut at Vegas. In our minds, and many others, we’re still looking at that finish, or our year as a first, a second, a fifth, and a first. I guess, technically, it’s not there so I guess that’s where I feel like that points buffer has hit us. I feel like to still be fourth even with that says something about our team.”

The win at COTA all but sealed the No. 38 truck’s entry into the NASCAR Camping World Truck Series Playoffs. Now the goal is to accumulate even more wins and Playoff points.

“COTA was a great points day, we maxed out on that,” Smith recounted. “If we’re in contention to win that regular season championship and collect those extra points it’s going to be awesome. But as for myself and my team, we’re just chasing trophies right now and having fun in the process.”

Another key to making this new partnership find success so early has been the willingness of everyone at Front Row to pull together for a common cause.

“It’s been really cool, honestly, to see not only all of that around but especially a group like the fab shop because they’re not as busy anymore and the Cup guys on their off days will give a helping hand to the Truck team. That’s what winning and championship race teams do- they look at themselves as all for one. I feel like that’s what Front Row is. When I went over there I really tried to pay attention to the people and I feel like the team I have assembled on my 38 truck is as good as it gets. I’m having a ton of fun with the group I’m with and I look forward to the future.”