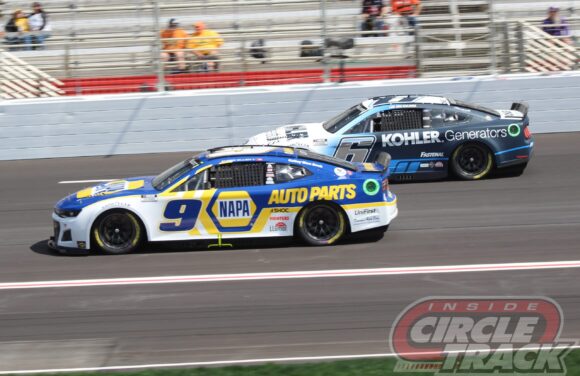 As every reader of this post surely already knows, sixteen drivers will qualify for the NASCAR Playoffs when the final cut is made following the Coke Zero Sugar 400 at the Daytona International Speedway in late August. Any driver eligible for NASCAR Cup Series points who has won a race up to that point will be among those vying for a championship provided that there have been sixteen or fewer race winners. If there are fewer than sixteen winners, the remaining spots will be filled by the winless drivers who have accumulated the most points.

After the first 10 races of the 2022 season, eight different drivers have scored a win essentially locking themselves into the Playoffs. To date, there are eight remaining places available. If the cut were to be made now, obviously, eight drivers would get in based on their current position in the standings. However, with each win by a different driver, one opening based on points is erased.

Keep in mind that a driver outside the top-16 in the standings can leapfrog over any and all others without a win regardless of how many or how few points they may have accumulated. As it stands right now, Denny Hamlin is 24th in the standings but would be included in the NASCAR Playoffs by virtue of his victory in Richmond. Christopher Bell is currently the driver on the so-called bubble with the lowest points total still above the cutline.

In 2021, fourteen different points-eligible drivers won at least one race within the first 26 events on the NASCAR Cup Series. A.J Allmendinger had won but was not Cup Series eligible. So as a result, only three racers made the NASCAR Playoffs by way of their position in the standings.

Last season started in much the same that this year has with many different winners in the first few events. As stated above, every win by a different driver takes away another possibility of making it in on points so with each passing week, winning becomes more and more important.

Currently, there are eight drivers who would be in the Playoffs without a win if the cut were made now, including the top-2 in the standings. Chase Elliott and Ryan Blaney would seem to be certain Playoff drivers if they can keep running as they are now even if they do not win a race.

The number of points a driver can earn during a race can be fluid. Not only finishing position but the number of stage points achieved are bundled into the final total. That said, however, some are already at risk of falling too far behind.

Tyler Reddick(1 point below the cutline) and Erik Jones(-12) are still well within striking distance provided no new winners change the dynamic of the situation. Kurt Busch and Daniel Suarez(Both -25) are on the cusp of must-win status. Any other poor finishes could put those drivers and their teams in jeopardy.

Chris Buescher(47 below the cutline), Bubba Wallace(-50), Justin Haley(-60) and Michael McDowell(-62) could still make a comeback in the remaining 16 races before the cut with a string of top-10 finishes and some luck regarding the finishes of those they are in competition with for Playoff positions.

In reality, anyone behind those drivers is likely to need a trip to victory lane sometime soon to assure themselves a shot at the NASCAR Cup Series championship. Former race winners Cole Custer and Ricky Stenhouse Jr. are among those. And after penalties incurred earlier this season, 2012 Cup champion Brad Keselowski is more than 100 points below the cutline and must win if he is to make the Playoffs for Roush Fenway Keselowski Racing this season.

It may seem early in the 2022 season. But the reality is that some have dug themselves into a deep hole during these first ten races. For those drivers and teams, it’s not early. Rather, time is quickly running out.

It’s now reached the point of ‘win to get in’ for many drivers mentioned above. The first chance for those in the must-win category comes this Sunday in the Duramax Drydene 400 at Dover Motor Speedway.