Skip to content
Home NASCAR Features What might the Clash teach teams about the Next Gen car? 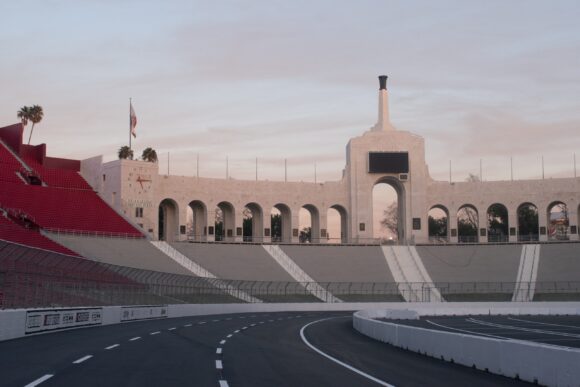 The L.A. Coliseum will provide one of NASCAR’s most unique venues

The time has finally come. After years of talk and speculation followed by months of testing, the Next Gen car to be used this season and beyond in the NASCAR Cup Series will turn its first competitive laps this weekend at the Los Angeles Memorial Coliseum in the Busch Light Clash at the Coliseum. The 150-lap exhibition main event held on a makeshift quarter-mile track will truly be an event filled with firsts.

Not only will the car be new but the race will be contested at place not originally intended for auto racing. The L.A. Coliseum has hosted the World Series, the Super Bowl and the Olympic Games. And now, its newly paved floor will be the site of a NASCAR race. But not only that, there will be pre-race entertainment along with a halftime break for the purpose of staging a concert. Hardly anything about this weekend will be routine.

With one of the crown jewels of motorsports, the Daytona 500, just two weeks away, the question of just how much teams can learn about their new racing machine has to be asked. In previous years, the Clash has been held at the Daytona International Speedway either on the 2.5-mile tri-oval or the road course and teams could learn a great deal about the performance of their cars from the short dash. That will hardly be true this year.

But with the 2022 version of this race taking place on the smallest track NASCAR has used in decades with a surface that was literally paved just weeks ago, it might seem unlikely that there will be much learned from the event meant to draw into a previously untapped audience.

In recent NASCAR Media press conferences, drivers offered their thoughts about what they think could be gleaned from this event in regard to their new rides.

“I’ve never raced a stock car on a track this small, and obviously, we’ve never raced the Next Gen car so it’s going to be interesting,” Joe Gibbs Racing driver Martin Truex Jr. stated. “I think in general you always look forward to a new year and seeing what you can do and another chance at doing some great things and winning some races, hopefully, and reaching the ultimate goal. I’m always looking forward to it but this year there’s more question marks than ever. It’s a little bit different but we’ve been in situations before like this where a lot of things are changing so you don’t really know. You just try to prepare the best you can.”

Truex believes that it will take more time than usual this season for teams to figure out exactly how they stack up against the competition. Where clarity typically came within the first few weeks of the season in the past, the 2017 Cup Series champion thinks it will be weeks later before things come into focus in 2022.

The Next Gen and each team’s ability to adapt to it will be keys to success.

“We’ve never had anything to change as much as we have with the car this year so it’s going to take us quite a while to figure out where we’re at, to learn about this car, to understand how to make it work on different types of race tracks,” the 41-year-old veteran driver pointed out. “I think that’s going to go on for quite a while. Things are going to change very rapidly through the first half of the year so it’s going to take a while to feel really comfortable about where you are and to really understand things to the extent we have in the past.”

One aspect of racing the car on this unusual track might provide teams is a lesson in terms of the car’s ability to slow itself. That improved braking could have an impact on races at the permanent short tracks. Although the car is heavy, its larger brakes(than what the Gen 6 car had) give the new machine greater stopping power. Still, Truex isn’t completely sure of what to expect.

“Obviously the brakes are big but the car is bigger and the car is heavier so we’ll see,” Truex said. “Throughout the years since I’ve been doing this the brakes have gotten so much better. It’s almost a non issue anymore. But again, we’re not really a 100% sure on this car and how it’s going to react but so far the brakes have been really good.” 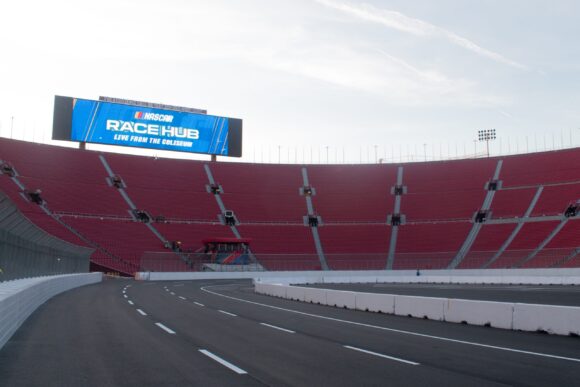 Hendrick Motorsports driver William Byron compares the Next Gen to another type of racer he has experience with. He believes that turning the car will be improved with the Next Gen. The tight turns of the L.A. Coliseum will test the steering ability of the car.

“The steering,” Byron declared when asked about a big difference between the Gen 6 car and his new ride. “It’s a rack and pinion so it’s more like a Super Late Model. The steering box that we used to run is definitely a lot slower so I feel like everything as you go down the straightaways is slower and you have more time to move your hands. The steering rack, I think, is an improvement. I like it so far. It takes a little getting used to the first couple of laps on the track every time that we go to a new track.”

Team Penske driver and 2018 NASCAR Cup Series titlist Joey Logano describes multiple differences between the Next Gen and its predecessor that will, in his opinion, impact short track racing.

“Some things will change,” Logano insisted. “On a short track, they’re just different. I don’t want to say they’re easier or harder to drive but your brakes probably aren’t going to be at limit anymore, you’ve got huge brakes on these cars. Wheel hop is not really a thing with the independent rear suspension but this allows you to dive it down in the corner harder. It’s going to change the racing a little bit, I think.”

Drivers will be allowed to race each other differently, according to the former champion. But he does not believe the Clash will provide any guidance because of the uniqueness of the venue.

“There’s less risk of wrecking yourself by overdriving the car which is going to change the way we all race each other,” Logano explained. “I’ll be interested to see what that looks like. I don’t know that the Clash is going to be the best example of what Martinsville will look like or at other short tracks because it’s so different.”

According to Logano, even strategy will be different with this car as pit stops will almost certainly be shorter due to the car’s single lug nut wheels. But again, the Clash will provide little guidance with its planned halftime break for crews to make adjustments.

Ultimately, the Busch Light Clash at the Coliseum is a show more than a race. While there may be a few things teams can learn about the Next Gen, the real learning will come later.

L.A. Coliseum is a big gamble but it’s worth the risk