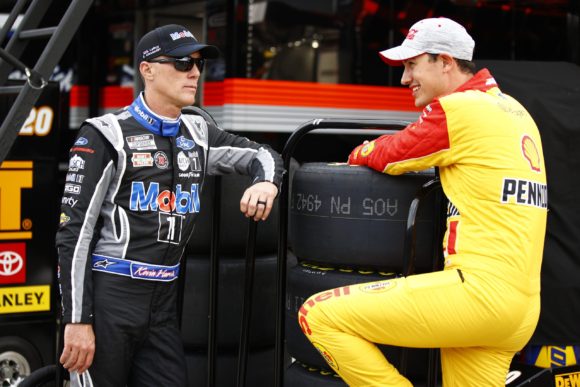 Not a lot of young people would be able to identify Kevin Harvick or Joey Logano(Photo: Getty Images)

We all have a tendency to live in our own little worlds in which we think everyone around us is in tune with the same things we are. Whether it be in the fields of politics, religion or sports fandom we are often surprised or even shocked when we learn that those we work with, are friends with, or see frequently at the business we patronize do not have the same depth of knowledge or concern about the subjects we consider important.

That was made abundantly clear to me on Friday.

By trade, I am a social studies teacher at Seymour High School which is located in the tourist destination of Sevier County, Tennessee. Just for the sake of reference, we are in the same county as the towns of Sevierville, Pigeon Forge and Gatlinburg and are located not far from Knoxville.

Everyday, I start each of my classes with a ‘Bell Ringer’ in which we discuss a Date in History, a Current Event, and a Question of the Day. As you might guess, I try to choose topics that fit with whatever my U.S. Government or Psychology classes might be studying at the time. But on occasion I will throw in a topic that may seem quite random.

My current event on Friday was that the Daytona 500 was set for this Sunday. This is where I came to realize that my world and the worlds of my teenage students are not even in the same universe.

In our discussion, I asked my first period U.S. Government class if any of the 30 students could name any NASCAR driver. The response was blank stares. When I pointed out that the NASCAR Speedpark attraction in Sevierville had been in our cafeteria just two days earlier recruiting employees with a cardboard cutout of a well known driver, that didn’t help.

The driver on the cardboard was, by the way, Kyle Busch. Still, mostly blank stares. One student did report that his dad had been at the 2001 Daytona 500 when Dale Earnhardt lost his life. That student said that his favorite driver is Kevin Harvick.

Things got worse in my third period Psychology class where none of the 15 kids could name a single driver. Even when I mentioned Kyle Larson and Chase Elliott there was no recognition. However, my fourth period was able to name more drivers. While some students in that class did not know of any drivers, there were others who actually knew several names going as deeply into the driver list as Erik Jones and Chris Buescher.

Even with that improvement, it is alarming for the sport that so many young people are unable to name its biggest stars. But to be fair, this lack of sports figure knowledge is not limited to NASCAR. I often use Lebron James and Tom Brady as examples of the effects of aging on the body in my Psychology classes assuming everyone knows who they are. However, those famous athletes are not as universally known among the young as one might think.

As a father of three teenagers, I can say with some degree of first hand knowledge that this generation is not one of sports fans who will sit still and watch an entire contest whether it be a race or a stick-and-ball game. There are simply too many options offering instant gratification to occupy their time. Video games, Marvel-themed movies, Star Wars-themed shows, and just hanging out or texting with friends rank ahead of sports for many of today’s under 20 crowd.

Granted, 80 or so kids at one single high school is not an ample sample for a scientific survey. But considering that the Knoxville market is typically one of those to draw the highest ratings for NASCAR broadcasts on a weekly basis, it is a bit concerning. NASCAR and all sports leagues will have to come up with ways to engage the next generation of potential fans or else there will be no fans to engage.

As was stated above, we are often tempted to believe that everyone around us is living within our little world and we’re often surprised when we realize that is actually not the case at all. But I was more than a little surprised to realize just how small the racing world actually is.