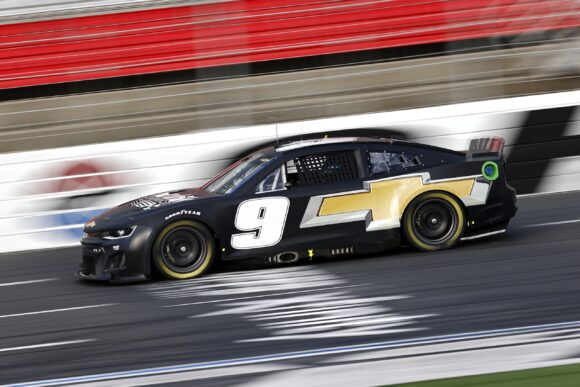 Give credit where credit is due.

NASCAR is not going to force its teams to roll into the 2022 season without ample track time to test the Next Gen car. Although there have been reports that the cars are in somewhat short supply, the Daytona International Speedway, Charlotte Motor Speedway, Atlanta Motor Speedway, the Charlotte Roval, and even Bowman-Gray Stadium have played host to the Cup Series over the most recent weeks and months as teams have put the new racer through its paces during the winter and even back into the fall of last season.

And that testing is not yet finished. Yet another session is slated to take place this week at the Phoenix Raceway as teams will take to that one-mile facility on January 25th and 26th(Tuesday & Wednesday) for the final test of the off-season before racing action begins with the Busch Light Clash at the Coliseum in Los Angeles on February 6th then the official season opener on February 20th with the 64th running of the Daytona 500.

This upcoming test will be an important one for a number of reasons. Of course, this is the track where the NASCAR Cup Series championship will ultimately be decided in November but that’s not necessarily what gives this two-day trial its importance. There are other factors to consider.

John Probst, NASCAR Vice President of Racing Innovation, cited that fact when he spoke to NASCAR.com following the most recent Daytona test.

“I think the goals for that test, obviously Phoenix is an important track not only to us but to our teams, because our championship event is held there,” Probst said. “It’s obviously one they have marked on their calendars that they want to show up and be competitive at.”

Of course, much of the focus in the NASCAR world is currently on the Daytona 500 with it not only being the race that will officially kick off the 2022 season but also because it serves as the sport’s marquee event. Keep in mind, however, the real meat of the NASCAR schedule isn’t on tracks such as the 2.5-mile high-banked Daytona International Speedway. Instead, other tracks with differing sizes and configurations will comprise most of the slate. This Phoenix test will answer more questions than the Daytona tests have when it comes to the races where larger chucks of the schedule will play out.

There are numerous tracks that are flatter in terms of banking that fit within the half-mile to just over a mile in length. Of course, Phoenix matches that description along with Martinsville, Richmond, New Hampshire and World Wide Technology Raceway near St. Louis which all fit into that category. Those facilities account for eight total races on the Cup schedule. If Darlington, which somewhat matches that description, is thrown into that mix the total number of contests that information learned during this test might benefit rises to ten.

Showing up with a good car at the tracks mentioned above could allow a driver and team to earn a spot in the NASCAR Playoffs with a win or to pile up points so they might make their way in with an at-large invitation.

And more, those tracks will employ the so-called high horsepower/low downforce package that calls for a 670 horsepower generating engine combined with a low downforce producing four-inch rear spoiler. That same combination will be in use on every track except Daytona, Talladega and Atlanta. Needless to say, any track time with that package will allow the teams to add to their notebooks before the season officiallybegins.

For comparison, Daytona, Talladega and the newly reconfigured Atlanta Motor Speedway will call for a package consisting of 510 horsepower with a seven-inch rear spoiler.

Going along with that higher horsepower and lower downforce package is the factor of tire wear. This car will produce different aerodynamic loads than the previous machine that was used by NASCAR teams for several years. As a result, this Phoenix test will allow both the teams and Goodyear to get an even better idea of how the Next Gen car will react when the rubber meets the road. Obviously, this is a factor that has already had great attention paid to it but tires are such a major contributing factor when it comes to both competition and safety that the evolution of this essential aspect of racing never ends.

Probst addressed the importance of learning as much as possible about tire wear on the new car during the Phoenix test when he spoke with NASCAR.com at Daytona. “From the NASCAR perspective, we want to go out there and make sure, as the track rubbers in, that we’ve got really good Goodyear tires, which they have done a fantastic job through this whole project with us making sure we’ve got the right stuff on the cars,” he pointed out.

To show it’s importance, Phoenix was one of the tracks used early on in the Next Gen process. Bear in mind that not only does this track serve as the location for the championship-deciding race in November but it also hosts the NASCAR Cup Series for the fourth race on the schedule. Both NASCAR and the teams show their awareness of the importance of this venue by travelling so far away from their home base to conduct this final test session of the 2021-22 off-season.

And with the sanctioning body and the teams now being further along in the development process, the time spent on the track is as much about refinement as learning new things. Probst believes this final test will serve to add to and confirm much of what has already been learned.

“I think as far as the package goes with the high horsepower and the low downforce, that’s certainly something our drivers love to drive, and I think we’ve done enough testing,” he pointed out. “We’ve been to Phoenix already with our prototype cars, I would anticipate a pretty good result coming out of there.”

Might the Next Gen call for the use of the tandem draft at Daytona?