No winners in the Brandon Brown sponsorship saga 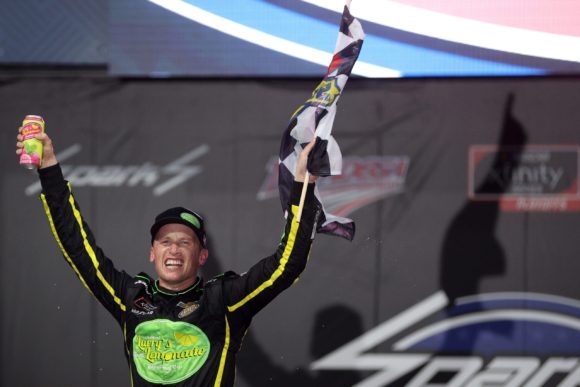 A young driver wins his first NASCAR Xfinity Series race driving for a small, family-owned team that had struggled from week to week to find enough sponsorship to literally keep the wheels rolling. This is the kind of stuff that leads to the making of a Disney movie. There’s no way this story could have turned out badly, right?

Well, enter vulgarity and politics along with a number of poor, short-sighted decisions made along the way and this dream story turns somewhat nightmarish.

Brandon Brown drove to victory for the first time in his NASCAR Xfinity Series career last October at the Talladega Super Speedway in what seemed to be a storybook moment in the history of the sport. After all, this was a driver whose team had been so financially strapped that he had gone so far as to make a spoof television commercial in which he took on the persona of a car dealer telling his audience that he could make them a great deal on whatever part of the car they might want to place their company’s logo.

His post-race interview following the Talladega race sounded exactly as one might expect an interview with an unexpected race winner to sound.

“Oh my God, this is a dream come true. Dad, we did it! Let’s go!” Brown emphatically declared to the television camera. “This is just everything we’ve hoped and dreamed for. Everything I’ve ever wanted to do was take the trophy home to mom and dad. It’s just such an unbelievable moment.” He then named a number of small companies who had backed his efforts.

It would seem that such a triumphant moment would lead to bigger companies causing Brown’s phone to “ring off the hook” with offers to provide sponsorship. However, the budding star’s post-race interview held on the track near the grandstand quickly turned his future in a new direction.

As Brown talked with NBC reporter Kelli Stavast, the crowd near the scene erupted in a vulgar chant demonstrating their dislike of President Joe Biden. In what was no doubt an attempt to deflect what would be an embarrassing situation for the broadcast network, its sponsors, NASCAR, and the driver himself, she declared that the crowd was chanting “Let’s go, Brandon”.

Shortly afterwards, “Let’s go, Brandon” took off among the anti-Biden crowd and became a nationally known euphemism meant to deride the President. T-shirts, flags, hats and bumper stickers are among the numerous items that can now be found bearing the phrase.

As has been well documented since, Brown’s storybook victory did not result in a line of prospective sponsors knocking on his door. Instead, the 29-year-old has found more obstacles than open doors as companies have not been eager to associate their name with that “Brandon”.

Soon, it was reported that the Xfinity driver and his Brandonbilt Motorsports team were finding it difficult to acquire sponsorship that would take their organization beyond the 2021 season. Racing at any level in NASCAR requires a tremendous amount of outside funding and companies looking to spend that much to advertise their products aren’t typically seeking to dive head first into a pool filled with controversy.

Brown didn’t ask for his name to be associated with a vulgar phrase nor did he lead the chant. Instead, a group of fans who opted to bring politics into a race track and a reporter who probably hoped to turn the focus where it should have been in the first place, on a first-time race winner, brought about an unintended result.

And just like that, what could have been a great opportunity was ruined.

Brown very publicly came out just before Christmas and announced that he had no intention of leading any sort of political movement, particularly one that used his name. It appeared as if Brandon was not going along with the “Let’s go, Brandon” movement.

However, that suddenly changed prior to New Year’s Day when Brandonbilt Motorsports issued a statement that it had entered into a deal with a cryptocurrency-type entity called LGBcoin_io for full sponsorship of their car throughout the entire 2022 campaign. Obviously, the LGB is a play on the “Let’s go, Brandon” phrase.

NASCAR, which has moved away from political associations in terms of public endorsements since parting ways with former leader Brian France, quickly let it be known that the sponsorship had not been approved by the sanctioning body and the team had issued their statement prematurely. And in fact, the deal was ultimately disallowed according to reports that were issued on Tuesday night. It was further revealed by media members with knowledge of the situation, such as Kelly Crandall in the tweet linked below, that the team might not have submitted details of the new deal properly and that, as a result, miscommunication had occurred.

Just was informed … Brandon Brown’s team has been told tonight their LGBcoin sponsorship has not been approved. Additionally, team did not follow proper protocol of submission and it also was sent to someone not authorized to approve it (more)

So why the change from not wanting to be political to accepting a political sponsorship?

One can only guess that with the 2022 season looming and no significant sponsorship deal signed the team felt as if it were backed into a corner and had few other options but to accept the LGBcoin offer. Otherwise, they likely faced a season in which they would have to incur the full expense of running a NASCAR team and not many private individuals can do that.

Brandonbilt Motorsports' plans for 2022 are now unclear after @NASCAR rejected the LGB Coin deal, as SBJ understands that LGB Coin was the only serious offer the team had on the table in recent weeks.

➖ NASCAR is expected to formally ban political sponsors in the coming weeks.

It was clearly a mistake to come out one week and declare that he wanted no political associations then announce a political deal barely a week later. And perhaps it was an even bigger misstep to divulge the deal without being absolutely certain of its approval by the sanctioning body.

Again, Brown didn’t ask for his name to be used in such a way and he didn’t lead the obscene chant. But if he intended to disown it, then he needed to completely disown it and be done with it.

That said, we have all no doubt all been in situations in which we have gone back on our word, or at least considered doing so, when faced with the possibility of losing something we treasure. But in such a public setting as NASCAR, there will be no shortage of critics and second guessers on social media or within the 24-hour news cycles. Unfortunately, that’s part of the price one pays for a certain degree of fame.

In this case, nobody wins in the end. No one will get a checkered flag or a trophy.

Brandon Brown will have difficulty recovering. NASCAR will once again have to fight off negative publicity from two different directions as one political side will be quick to brandish the term “redneck” and the other will declare that they have betrayed their core fanbase.

Politics has an amazing way of creating “nobody wins” situations.