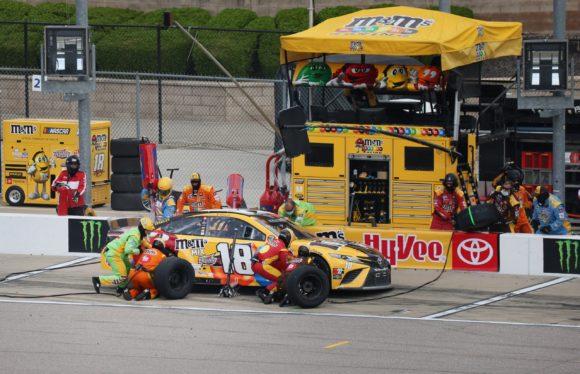 The M&M’s brand is one of the most recognizable in racing(Photo: Getty Images)

Over the most recent weeks and months, NASCAR has been experiencing a wave of positive energy, or a least a wave of happenings that have put that form of motorsports in the headlines on multiple occasions.

A highly entertaining NASCAR Playoffs run ended the season with a dramatic battle in the season finale that produced a popular champion with an intriguing comeback story which captured the attention of many inside and outside the sport. A very public dispute between two of racing’s most high-profile stars garnered attention throughout the sports world. And the introduction of a new car has created a buzz that has many fans as well as competitors anxiously looking forward to the upcoming season.

With those kinds of stories at the crest of that wave, everything is heading in a positive direction, right?

Actually, NASCAR and one of its top teams received a lump of coal in their stockings just a few days before Christmas this year even in the midst of all that good news. Mars, Incorporated which produces such products as M&M’s, Snickers, Twix, Skittles and other candy brands officially made it known that they would not be returning as a sponsor for the No. 18 Toyota driven by Kyle Busch for Joe Gibbs Racing after the conclusion of the 2022 NASCAR Cup Series season.

Obviously, this news stems the tide of positivity that the sport had been experiencing of late.

Mars, largely through its M&M’s brand, has served as a backer of race teams since the 1990’s when that candy’s name adorned the sides of cars driven by Ernie Irvan and other racers. At the beginning of the 2008 season, the marriage between Mars, JGR and Kyle Busch came to fruition leading to one of the most successful runs in recent NASCAR history with numerous race wins and two NASCAR Cup Series titles ultimately resulting.

It goes without saying that anytime a primary sponsor leaves NASCAR, it is bad news for not only the particular organization directly affected but the sport as a whole. And it’s not just that M&M’s is a significant backer of a top-tier team, but it is and has been one of the most recognizable brands associated with one of the most recognizable drivers in all of racing. This announcement meant much more than simply having a source of money slip away, it meant that a longtime marketing partnership that provided significant recognition will be lost from the sport less than a year from now.

JGR will likely find new partners going forward who will help pay the bills. But will those new sponsors also bring the same notoriety as was the case with one of America’s most known brands?

These will not be easy shoes to fill. The promotional value that comes along with a company such as Mars can’t be easily replaced because there are not many company’s that reach across so many demographics. Children all the way through senior citizens enjoy M&M’s as all races and ethnic backgrounds recognize that familiar logo. This is not a car care company or a product specifically geared toward men or women, old or young, people with gray hair, people with no hair, or any other distinguishing feature one can name. In other words, M&M’s are not a niche product.

In short, this company’s decision to take its marketing in a new direction will almost certainly leave a void in this form of motorsports. At a time when things seemed to be going quite well for NASCAR, this is not the news they wanted or needed to hear.