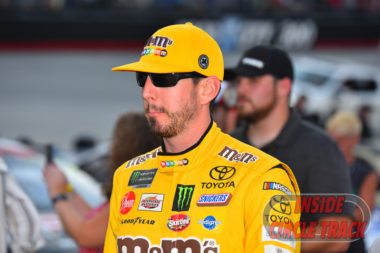 In a story first reported by FloRacing.com, it has been announced that two-time NASCAR Cup Series champion Kyle Busch has entered this week’s Lucas Oil Tulsa Shootout to compete for a much coveted ‘Golden Driller’ trophy. The event is set to take place inside the SageNet Center in Tulsa, Oklahoma. The 36-year-old winner of 59 NASCAR Cup Series events has indicated that he will compete in four classes during the four-day event that begins on Wednesday and will be shown live by FloRacing.com.

Busch will drive cars owned by Joe B. Miller in the Tulsa Shootout.

Busch will race in the Winged Outlaw, Outlaw Non-Wing, Stock Non-Wing, and A-Classes among some of the top competitors in that form of motorsports. Busch’s Joe Gibbs Racing teammate Christopher Bell is also entered along with NASCAR regulars Hailie Deegan, Sheldon Creed and Brett Moffitt.

Busch’s son Brexton will be racing in the Jr. Sprints division.

Although Busch is not a regular racer on dirt surfaces, he did compete in the Karl Kustoms Bristol Dirt Nationals(where he finished 13th & 11th in the two features) earlier this year to help prepare for the Food City Dirt Race at Bristol Motor Speedway. He is also a former winner(2012) of the ‘Prelude to the Dream’ that used to be held annually at the Eldora Speedway in Rossburg, Ohio as a preliminary event leading into the Dirt Late Model Dream.

Busch’s NASCAR team was recently in the news when it was made known that longtime sponsor Mars, Inc.(maker of M&M’s candy) would not be returning as a primary backer following the 2022 season.

The Las Vegas native will be making his debut in this type of racing.