Skip to content
Home NASCAR Blogs Should a season championship be decided by the last pit stop of the last race?

Should a season championship be decided by the last pit stop of the last race? 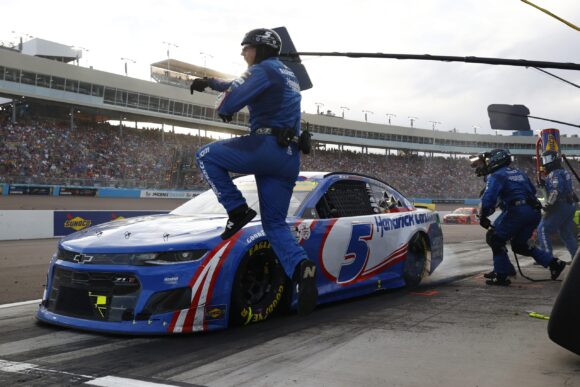 While there were all sorts of possibilities for how the NASCAR Cup Series season could have ended, its conclusion ultimately played out in the best possible way. Following the 2020 campaign in which the driver with the most wins over the course of the year did not even make the Championship 4, the driver that had dominated in virtually every way possible in 2021 ultimately hoisted the trophy on Sunday evening at the Phoenix Raceway. And he did so in the most dramatic of ways.

Kyle Larson earned the NASCAR Cup Series title after having won the regular season championship, scoring more top-5 and top-10 finishes than any other driver, leading the most laps by more than 1,000 over the next closest competitor, and collecting ten total victories. Those ten triumphs gave him more than twice as many checkered flags as his next closest rivals.

But with all of those statistics in his favor, the championship appeared to be in doubt with the end of the Cup Series Championship Race approaching and Larson trailing the other title contenders. A late race caution with just 29 circuits around the one-mile track remaining set up one last trip to pit road. The No. 5 Hendrick Motorsports pit crew nailed their final stop of the day and put their driver back on track in the lead which allowed him to have lane choice for the final restart.

“Game 7 Moments” are the desire of the sport’s top officials as well as its television partners. That’s what the sanctioning body and its stake holders got in Phoenix.

That pit stop made the difference in winning the title or not. With that in mind, it seems somewhat trivial to have a pit stop determine the final outcome in the race for a series title but the current NASCAR Playoffs system was designed to have the championship remain in doubt until the checkered flag waves over the season finale.

Larson acknowledged the importance of that final stop in his post-race press conference on Sunday.

“Yeah, I always felt like, no matter how bad I felt like our car was at times, as long as I could stay with them, the other drivers in front of me, with our pit stall selection and my pit crew, I knew that we were going to be in it,” he said. “For us to come in fourth behind them and come out the leader was a little bit better than I thought we could do. But my pit crew, I’ve got all the belief in the world in them. They proved all season long that they were consistent and consistently fast.”

Hendrick Motorsports earned its 14th NASCAR Cup Series title as an organization largely because of that stop.

“We have such a great team, and they’re a massive part of it, and they’re the reason why we won tonight,” Larson added. 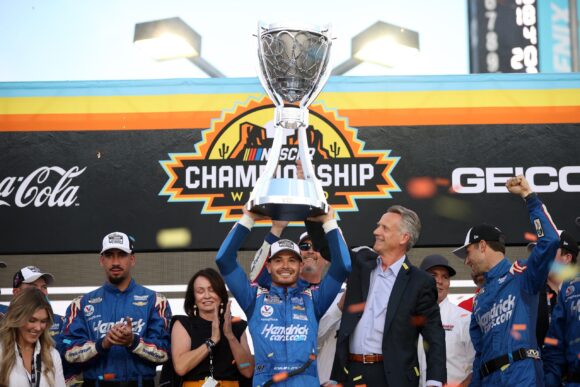 In the end, the right driver hoisted the trophy on Sunday evening(Photo: Getty Images)

The 2021 NASCAR season ended the way it should with the series’ most accomplished driver throughout the campaign hoisting the trophy at the end of the day. Yes, Larson had to have the success from earlier in the season to get to the point that he even had a chance to win, but ultimately, winning or losing the championship boiled down to some debris being found on the track and the pit stop that followed.

It just feels like that’s leaving a lot to chance.