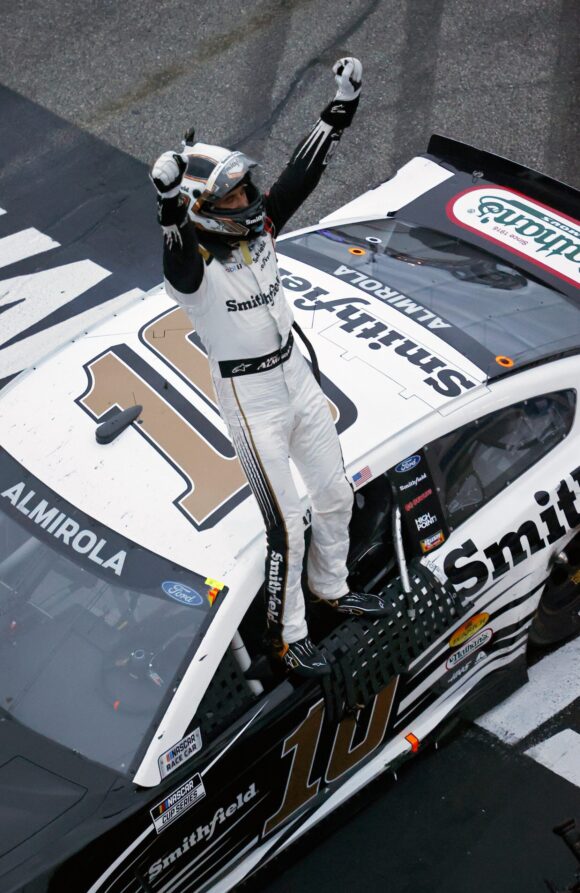 Aric Almirola was the only SHR to find victory lane in 2021(Photo: Getty Images)

A look at the overall statistics from the 2020 season makes it seem as if the entire Stewart-Haas Racing organization was highly competitive. However, a closer examination of those numbers reveals that, in reality, it was only one of of that company’s teams that compiled the bulk of those stats.

During that season, SHR had a total of 10 wins and 30 top-5 finishes. Their Ford machines led a total of 2121 laps during that campaign. But that closer look mentioned above reveals that the No. 4 car driven by Kevin Harvick actually amassed nine of those ten wins and two-thirds of those top-5 results. Further, the veteran driver accounted for 1531 of the 2121 circuits led.

Still, even with just one driver doing the overwhelming majority of the work, the organization showed that it had the ability to do good things. If one of their cars can run that well there is at least the possibility that all of them can. And coming into the 2021 campaign, there seemed to be reason for optimism.

Clint Bowyer retired as the driver of the No. 14 ride to take a place in the Fox Network broadcast booth. The veteran driver was then replaced by hot prospect Chase Briscoe who was coming off of a season in which he had won nine times on the NASCAR Xfinity Series.

Further, 2020 Rookie of the Year Cole Custer, who was the only SHR driver aside from Harvick to win a race last season, would then have a full year of experience under his belt. Also, Aric Almirola came into 2021 after having earned a career-high 18 top-10 finishes during the previous season.

Surely Stewart-Haas Racing had at least as good if not a better all-around season in 2021 than it had in 2020, right? The answer to that question is a resounding no.

Although Harvick had almost as many top-10s as had been the case in 2020, the former champion recorded his first winless NASCAR Cup Series season since 2009. The No. 4 ran at the front of the field for only 217 laps during the just concluded campaign. And even though he ended up 5th for the second consecutive season in the final series standings, ‘Happy’ never seemed like a threat to win his second title in the same way he had during much of 2020.

The drop off among the other three SHR cars was just as dramatic from 2020 to 2021 with Almirola scoring the organization’s only victory in New Hampshire.

So the question for the company co-owned by former NASCAR champion Tony Stewart and businessman Gene Haas is can they find a way to fulfill the promise that appeared to show itself one year ago at this time?

One factor that will be markedly different going into the upcoming campaign will be the emergence of the NextGen race car. The new machine to be employed in the NASCAR Cup Series in 2022 had originally been slated for its debut in 2021 but the workplace restrictions brought on by the Covid-19 pandemic caused a one-year delay in that process.

With the limited amount of testing done so far, the new car is largely an unknown for all teams during this off-season. Perhaps most importantly for SHR, it means that the difficulties of last season can mostly be forgotten. And that is also true of the successes experienced by their rivals.

Essentially, everyone is starting the 2022 season with a clean slate. So whichever organization can best fit the NextGen car to their driver’s style could be set up for success in the early going of the year. And it would stand to reason that this organization with a number of talented people would have as good of a chance at doing that as any other.

Typically, younger people adapt to new things more quickly than those who may be more set in their ways. With two recent Rookie of the Year drivers in Custer and Briscoe, the new car could provide an opportunity for that duo to improve upon their most recent campaigns. And, of course, Harvick and crew chief Rodney Childers have a track record of success and can never be counted out no matter what the circumstances.

What’s going to happen with this new car is difficult to predict. But with that taken into consideration, the safest guess would likely be to predict that Hendrick Motorsports, Joe Gibbs Racing and Team Penske will continue to be very good. However, the NextGen machine provides an opportunity for others to make gains on the traditional front runners.

After what, by any account, would have been considered a disappointing season, Stewart-Haas Racing needs to capitalize on this opportunity to close the gap that widened between themselves and the other top-tier organizations in 2021.