What if Kyle Larson doesn’t win the championship? 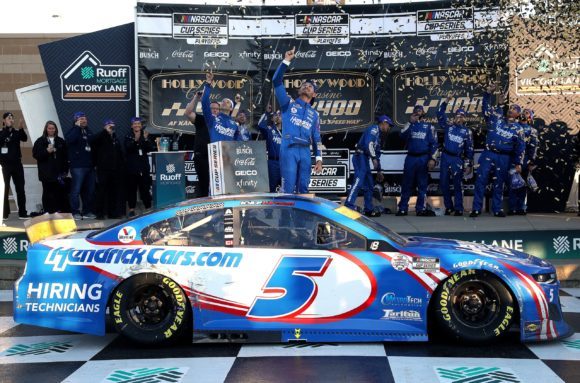 Kyle Larson has won twice as many races as any other driver(Photo: Getty Images)

The best driver over a given season should be the one to win the NASCAR Cup Series championship, right?

While it would seem that such should be the case. However, a look back at the way the NASCAR Playoffs have played out over the past few years indicates that the best driver over the course of a season does not always win the title. In reality, it might seem as if the opposite is more likely to be true.

Just look back at the 2020 season as an example. Kevin Harvick won a total of nine races but did not even advance to the Championship 4 finale in Phoenix. Denny Hamlin was second on the list of race winners with seven triumphs but only managed a fourth place result in the final championship rundown. In the end, of course, it was Chase Elliott who got hot at the right time by winning the last two races of the 2020 campaign to claim the big trophy at the end of the season.

The 2018 season provides another example of drivers and teams who were the best over the course of the entire season but were ultimately not crowned as the champion. Harvick and Kyle Busch led the series in victories that year with eight each but neither received the glory of a championship. Instead, Joey Logano went into the finale at Homestead-Miami Speedway as the decided underdog against the ‘Big-Three’ of Harvick, Busch and Martin Truex Jr. but eventually emerged as the race winner and the trophy collector.

Perhaps the best example of all to demonstrate that the driver with the best overall record doesn’t always win out in the end came in 2015 when Kyle Busch grabbed the title despite having missed 11 races during the season due to injury. Granted, the No. 18 Toyota did stage a remarkable comeback by winning a total of five races and scoring enough points during the regular season to pull into Playoff contention, but still, he missed 11 races.

Could something similar happen in 2021?

Although he and Denny Hamlin are very close in terms of the number of points accumulated over the course of the season to date, Kyle Larson has been the primary headline grabber so far this year. The No. 5 Hendrick Motorsports Chevrolet has ended its day in victory lane a total of nine times in 2021 which is more than double the number of any other driver on the NASCAR Cup Series. And the Elk Grove, California racer seems to be getting hot at exactly the right time as he has won the last two races on the Cup Series schedule.

Still, there is the very real possibility that Larson might not win the championship despite having been so dominant throughout much of the year. While he is guaranteed a place within the Championship 4, nothing more is certain. He could conceivably lead the most laps and have an almost unbeatable car in the finale at Phoenix only to have a flat tire late in the race, as was the case earlier this year at Pocono, which could rob him of the title.

Any number of other things could occur, of course. Mechanical trouble, a poor pit stop at the wrong time, getting caught up in someone else’s crash, and about a million other scenarios could play out over the course of that day. Just one of things could prove disastrous for Larson.

But under the NASCAR Playoffs format currently in use, those are the risks. In the same way the best team going into the NFL Playoffs or the NCAA Basketball Tournament is not guaranteed anything other than a chance to piece all the parts together correctly to win the coveted championship.

NASCAR used to compile points over the course of an entire season but the championship might sometimes be decided before the final race. That was something those in charge of the sport and the networks that air the races were comfortable with. As a result, the Playoffs were born. And sometimes that leads to an eventual winner who did not enter the final stretch run as the favorite as we have seen in recent years.

So if Larson doesn’t win the championship in Phoenix, he will simply be following a fairly prevalent recent pattern.