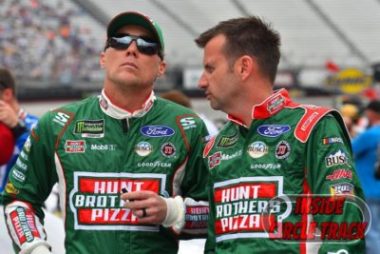 For a driver who was eliminated following the NASCAR Cup Series race held last Sunday afternoon at the Charlotte Motor Speedway ‘Roval’, Kevin Harvick has commanded a great deal of this week’s racing news cycle. Last year at this time, he was also a major part of the NASCAR Playoffs story but for a very different reason as many considered him the favorite to go on and add a title to the one he earned in 2014.

After the 2020 ‘Round of 8’ Harvick and his Stewart-Haas Racing team were knocked out of contention and went to the season finale at the Phoenix Raceway without even a chance of being crowned as the NASCAR Cup Series champion. Coming into that round of the Playoffs, the No. 4 Ford had amassed nine wins and led the series in top-5 and top-10 finishes as well as laps led. There was no reason to believe anything other than he was the favorite to ultimately claim his second championship trophy.

However, the 2020 race at Texas Motor Speedway proved to be a turning point. That race started under sketchy conditions with a light mist falling and a less than dry track surface on which to race. Harvick slid out of the groove early in the going and banged into the outside wall doing damage to his car. The red flag was eventually displayed to the field and would not be rescinded for three days as rain plagued the Dallas-Fort Worth area until the following Wednesday.

Ultimately, Harvick would struggle to a 16th place finish in Fort Worth and would not be able to recover well enough to make his way into the Championship 4 despite a desperate attempt in the penultimate race at Martinsville Speedway.

Even though he had been eliminated from title contention, many thought Harvick and his Rodney Childers-led crew to would show up at Phoenix with a point to prove after having had a dominating car throughout the season then not earning a place in the title deciding event. Furthermore, the Arizona track has been one of the veteran driver’s best throughout his career.

Instead of a point-proving run at Phoenix, however, Harvick turned in a lackluster performance that did not see him lead a single lap on his way to a somewhat forgettable seventh-place result.

Fast forward to the return of the NASCAR Cup Series to the Lone Star State in the fall of 2021. Harvick has not won a race since his victory at the Bristol Motor Speedway in September of 2020. And more, the Bakersfield, California native has engaged in two highly publicized spats with defending series champion Chase Elliott in Bristol and Charlotte over the past few weeks. 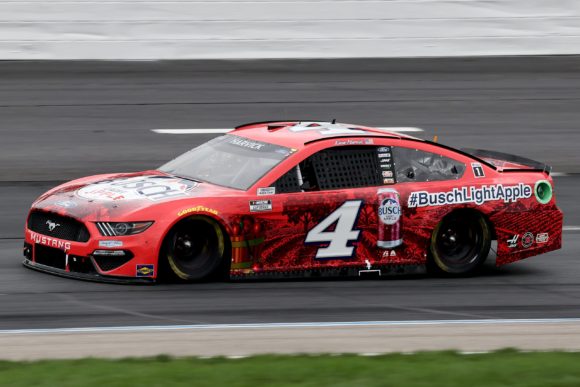 Kevin Harvick has yet to score a win in 2021(Photo: Getty Images)

Harvick needs to make it into the NASCAR news cycle for something other than not running well and feuding with the sport’s most popular star. These remaining four races on the 2021 schedule will be the last for the current car as the NextGen machine will make its debut next season. The 45-year-old driver’s experience advantage over much younger drivers will essentially be erased as everyone will have the same amount of seat time when the green flag waves over the Daytona 500 in February.

While, yes, Harvick did make it past the first cut in the NASCAR Playoffs this season, it is not unfair to say that the No. 4 team has dropped off significantly from this time last year. It would be easy to argue that this team’s season came off the rails in Texas last year. With four races remaining, a victory before the 2021 schedule ends could go a long way toward improving the outlook for 2022 even if a new car is going to be brought online.