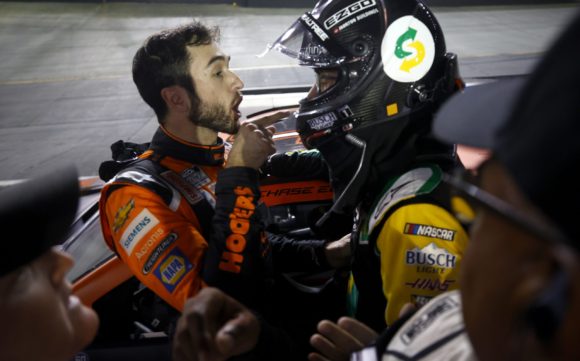 Unless you have been off of the planet over the past few weeks, you probably already know of the running feud between NASCAR Cup Series champions Chase Elliott and Kevin Harvick. What appeared to have begun at Bristol Motor Speedway with a side-by-side rub that later turned into one driver holding the other up long enough for a lead change to occur has now evolved into a pair of crashes on the Charlotte Motor Speedway Roval.

A pair of face-to-face disagreements in the Bristol infield were followed up this past Sunday with some televised post-race barbs thrown in each other’s direction.

Elliott jabbed at the fact that Harvick and his Stewart-Haas Racing team did not transfer to the ‘Round of 8’ when he was asked during a post-race interview about the tangle between he and Harvick earlier in the Bank of America Roval 400 that sent Elliott’s car into a retaining wall.

“Yeah, I mean, our team has a lot of fight,” Elliott told the NBC camera. “I’m just super proud of that. As far as Kevin goes, just want to wish them a merry off-season and a happy Christmas. Opinion’s certainly not changing. But it’s all good. Just glad we’re moving on. Proud of our team.”

Harvick crashed out of the race on lap 100 just as Elliott’s Hendrick Motorsports No. 9 Chevrolet was about to catch the No. 4 Ford.

“Sometimes real life teaches you good lessons,” Harvick declared to NBC when asked if his tap to Elliott’s rear bumper was retaliation for the Bristol situation. He then offered a sly grin when asked if he and Elliott were now even.

This rivalry embodies more than just a grudge between two drivers. Instead, this feud represents the major changes that are in the process of taking place in NASCAR.

There is a generation of drivers who are still highly competitive but who are nearing the ends of their careers. Kurt Busch, Denny Hamlin, Martin Truex Jr., and of course, Kevin Harvick are among the over forty crowd who likely have more racing days behind them than in front of them. As a result, these aging stars will naturally come in conflict the the twenty somethings, Elliott among them, who are emerging to take their places.

But there is more change afoot than just that of younger drivers rising up to challenge the older veterans. That’s something that has been going on for as long as the sport has been around.

A new car is coming, new tracks have been being injected into the NASCAR Cup Series schedule, and new methods for determining how points are distributed and how a champion is decided are now a part of the sport.

As was demonstrated earlier this week, the so-called NextGen race car is about to be integrated into the series. Tests were conducted on Monday and Tuesday of that car as its time is about to come. For young drivers, this is the first time in their careers that they have gone through such a major change in the type of cars they will race. But for the older crowd such as Harvick and Busch, this is something they have experienced before and may not be looking forward to as much as their less seasoned counterparts.

Further, consider that older drivers who initially joined the circuit when there were only two road course races each season and not as many different venues as there are now. While younger drivers who use simulators and other modern tools may see new speedways as an enjoyable challenge. Older drivers may not be as excited about having to learn new tracks that may not suit their driving styles as well as those venues that have either been lost or reduced in number.

Finally, the last two decades have seen tremendous change in the ways NASCAR distributes points and determines a champion. A playoff, stage wins, and a complete revamping of points payouts have occurred in the past twenty years. And the sanctioning body has demonstrated that it is not afraid to shake things up every so often which means it would not be out of the realm of possibility that some other change might come in the next few years.

Again, the younger crowd often embraces change while the older crowd may wish things would just stay the same.

This is not to say that these two drivers are feuding because of the NASCAR Playoffs or a change in the races on the schedule. It is meant to point out that there are generational differences at play here.

The 45-year-old Harvick represents the NASCAR of old while the 25-year-old Elliott embodies the new version of the sport. The two drivers, much like the two racing generations they represent, do not appear interested in coming to terms with each other.

“It was like speaking to a 9-year-old,” Harvick was quoted as saying following his post-race conversation with Elliott after their initial run-in at Bristol Motor Speedway. As a member of the older generation myself, I can relate to that viewpoint because those of us who have grown set in our ways are often opposed to those things that represent change. It’s likely that most drivers at or near Harvick’s age feel the same way about the changes that have and are coming to NASCAR.

NASCAR isn’t the same as it was 20 years ago. This rivalry represents that which is current vs. that which is near the end of the line in more ways than one.