Will anyone top John Hunter Nemechek for Truck Series title? 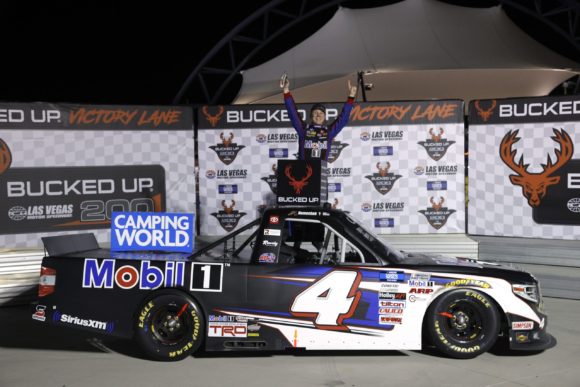 The time has come for the NASCAR Camping World Truck Series run toward the championship. With fifteen races in the books so far in the 2021 season, ten drivers are about to embark upon a seven-race stretch that will ultimately end with one racer being handed the big trophy at Phoenix Raceway. But of those ten drivers, one would seem to be the clear favorite.

John Hunter Nemechek’s five victories have more than doubled those of his closest rivals in the number of race wins scored throughout the campaign. As a result of this year’s overall performance, the 24-year-old driver will enter the NASCAR Playoffs with a 28-point lead in the standings due to the playoff points accumulated throughout the regular season. When the playoffs get underway this weekend at World Wide Technology Raceway at Gateway just outside of St. Louis there will be nine other drivers who will know that if they are to have a shot at the title they will have to go through the No. 4 Kyle Busch Motorsports Toyota.

The Mooresville, NC driver explains that the strategy entering the playoffs is simple. According to Nemechek, the performance shown throughout this season has to continue if a championship is to be earned.

“We want to continue to win races,” he insisted. “And for myself, I’ve been the underdog. I’ve had that mindset, and now we are kind of the favorite going into it. We have to go perform. We can’t beat ourselves. We’ve had the championship mindset from the first race of the year, and now we are going to continue to do so. We’ve got to win when it counts, and hopefully, we can carry the momentum and all of the race wins that we’ve had so far this year into the Playoffs and go get quite a few more wins. The racetracks coming up for us, I feel like are really good for myself and Kyle Busch Motorsports as a whole, and we just have to execute. We can’t beat ourselves.”

After having such an outstanding regular season, would anything less than a championship be a disappointing result for Nemechek?

“Kind of,” the driver admitted. “I don’t know if we would categorize it as a failure, but using the #Here4Wins, we want to win everything. The goal was to come back and win as many races as possible through the year and try to win all the championships that we could, all of the money that Marcus Lemonis(Camping World) put up for the bonuses going throughout the year, that was huge for us as well. Our goal is to take the big trophy at the end of the year. I don’t know if I would categorize it as failure. We want to make it to that final four in Phoenix and give it our best shot. If our best shot isn’t good enough, then we have work to do it in the future.”

Failure may not be the word to apply if John Hunter Nemechek doesn’t win this year’s NASCAR Camping World Truck Series championship but it certainly would be an upset for anyone other than him to be crowned.