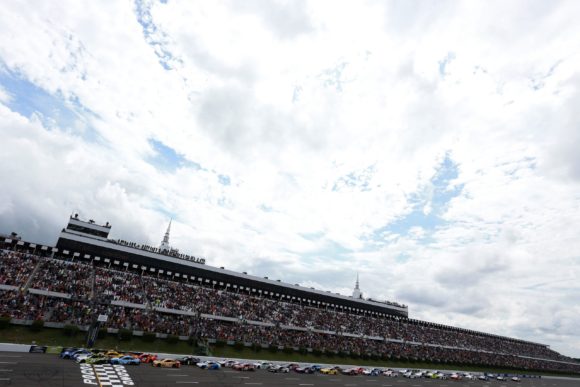 Thousands of fans look on as the Cup Series race takes the green flag on Saturday at Pocono(Photo: Getty Images)

On Saturday in the Pocono Organics CBD 325 there was a tense late race battle for the lead that saw Kyle Larson finally get by Hendrick Motorsports teammate Alex Bowman with three laps remaining then drive on to what appeared to be a certain victory keeping his winning streak alive. However, a flat tire on the last lap changed all of that as Bowman regained the top spot in the final corner and drove on to the checkered flag.

But it wasn’t just Saturday’s finish that was intriguing about that race. There was passing, there was strategy, there was contact between cars, and there were even a couple of crashes. The race produced just about all the drama one could want from such an event.

And all of that Saturday action was then immediately followed up by the Explore the Pocono Mountains 350 on Sunday afternoon. Once again, there was a tense finish loaded with drama. As is often the case, fuel mileage played a significant role in the outcome of this one as Kyle Busch and Joe Gibbs Racing broke the stranglehold Hendrick teams have recently had on victory lane.

But again, it wasn’t just the finish that made the race interesting.

Busch’s Toyota began to experience transmission trouble around the midway point of the race and appeared certain to fall from contention. However, a few breaks falling the right way allowed the No. 18 to remain on the lead lap and ultimately outlast JGR teammate Denny Hamlin on fuel.

And more, the varying strategies in play provided opportunities for the likes of William Byron, Brad Keselowski, and Kevin Harvick to, at one time or another, look like potential winners. On top of all that, the top-10 finishes of drivers such as Bubba Wallace and Ryan Preece, who do not often find themselves in those positions, provided even more to be intrigued by.

Add to all of that the jam packed weekend schedule that called for the ARCA Menards Series, the NASCAR Camping World Truck Series, and the NASCAR Xfinity Series to all race within a three-day span at the same track and there was wall-to-wall high speed excitement with each of those races also producing similar drama to that of the Cup Series.

There are times when, even if only watching on television, a fan can sense the electricity in the air during a sporting event. This weekend maintained that sort of vibe throughout as fans appeared to very much enjoy their return to the Pennsylvania track and that feeling even resonated through the TV screen.

While there were plenty of fans in the grandstands, the real energy of this event seemed to flow from the camping areas as people were able to break from pandemic restrictions and the negative feel of every day news stories to just get out and enjoy themselves.

When NASCAR first announced that there would be a weekend double header at the Pocono Raceway during the 2020 season, I was one who reasoned that it would be a good way to just “get it over with” in regard to racing on that 2.5-mile triangle shaped track. Of course, last year’s coronavirus restrictions did not give this track or any other an opportunity to put its best foot forward. And who knows, maybe this weekend was a one-time post-pandemic exception, but everything seemed to go really well for NASCAR, the television networks, and all involved.

So as far as this writer is concerned, keep the Pocono NASCAR Cup Series double header on the schedule along with all of the other racing featured there. I will freely admit that I have changed my mind about Pocono.