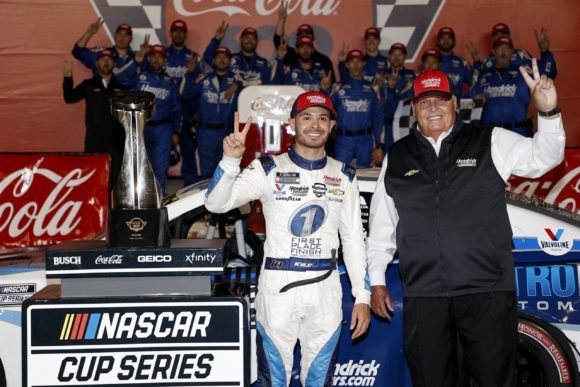 To say that Hendrick Motorsports has things going their way right now on the NASCAR Cup Series would be a massive understatement. The organization based only a short distance from the Charlotte Motor Speedway has won six of the first fifteen races on the 2021 schedule, including the last three. All four of their drivers have essentially locked themselves into the NASCAR Playoffs by winning at least one race and the company’s total of laps led to this point is nothing short of impressive.

Sunday night that dominance by the team that employs Chevrolet Camaros as its racers was clearly on display as Kyle Larson drove his No. 5 machine to a dominating victory in the crown jewel Coca-Cola 600 on his team’s home track. HMS drivers Larson, Chase Elliott, William Byron, and Alex Bowman occupied four of the top-5 finishing positions when the checkered flag waved. And including Larson’s 327, the drivers from the Rick Hendrick-owned operation paced the field for a total of 373 of the 400 total circuits.

This was not the first time in 2021 that Hendrick Motorsports has proven to be so powerful. Their drivers took the top-4 finishing positions in the Drydene 400 at Dover International Speedway just over two weeks ago after leading all but 18 laps of that event.

A significant turnaround has taken place for HMS since the midpoint of last season when some were questioning if the motorsports giant had somehow lost its way. But the second half of 2020 marked a major comeback which ultimately culminated with the company’s thirteenth NASCAR Cup Series title when Chase Elliott took the checkered flag in Phoenix.

Following his organization’s record setting 269th victory at NASCAR’s top level, Hendrick spoke with reporters in the Charlotte Motor Speedway media center. He believes the communication and cooperation among the teams has been key.

“You work hard, you hope you can pull that off and all the cars be fairly close and run the race together,” Hendrick said of his four teams. “And boy, I don’t know what turned it on all of a sudden, but all the hard work and the cars are fast. The guys are doing a great job. The pit crews are doing well. It feels good. I can’t believe we got 269. It was kind of neat to – I want any one of them to win, but the first one was the 5 and this one was the number 5. But you work towards having this kind of communication and the cars running that way all together, but it’s just hard to do.”

One aspect that changed late last year was the elevation of former championship-winning crew chief Chad Knaus to the role of vice president of competition for HMS. Larson, who is in his first season with the Hendrick organization, believes that move has benefitted all four teams.

“It’s a little unique because I never got to see Chad Knaus in the crew chief role and I didn’t get to see how their competition meetings were run before, but when I am sitting in that competition meeting room and he’s running it, you get to see why he is and how he takes everything very seriously,” Larson explained. “He dives in deep to everything. He’s very thoughtful and thinks deeper than I’ve ever been around anybody. He thinks about a lot of, like I said, deep things that I would never even think would be a thing.” 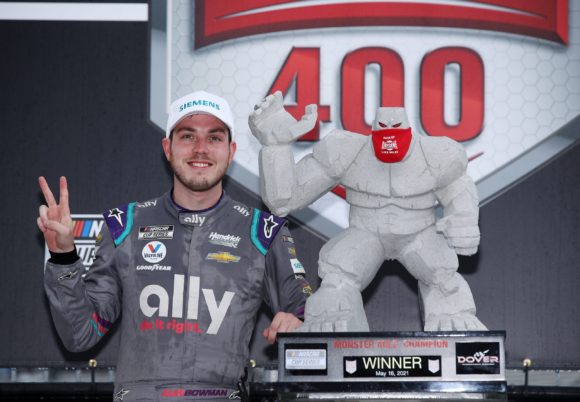 Alex Bowman has added to wins to the HMS totals in 2021(Photo: Getty Images)

Larson adds that Knaus is the right person for the job that he now has.

“I think it just shows how his mind is on racing and how to be faster, how to make all four of us faster every day of the week,” the 28-year-old driver pointed out. “He’s a great leader, and I think the same as Mr. H, everybody has got a lot of respect for him. I think his role now probably fits him perfectly for where he’s at in his career and with everything he’s already accomplished. He’s definitely doing a great job.”

While his drivers have cooperated well with each other to this point in the season, Hendrick believes they, at the same time, push each other to be better.

“It’s one of those things that everybody wants to be number one in the herd, so just let them all win races and we’ll see how it comes out on the other end,” the team owner added.

2020 Cup Series champion Elliott described the current situation at HMS as one in which each driver and team are trying to do the best for themselves and for the organization as a whole. 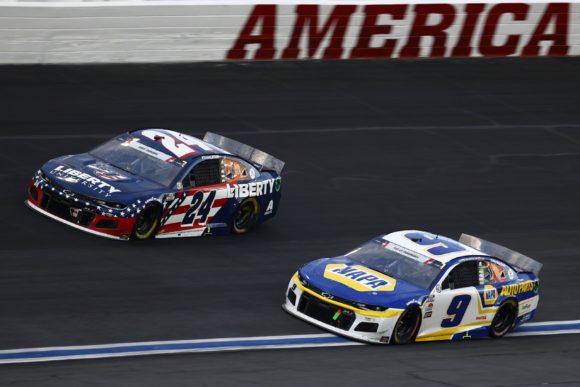 The second generation champion knows that HMS can’t rest on its laurels at this stage of the season.

“I hope we’re always this good and always this competitive, but I think the law of averages would tell you that that’s not going to last forever,” Elliott explained. “I think we all want to try to take advantage of the opportunities that we have right now as a company and continue to challenge ourselves to be better because our competitors are getting better, they’re pushing harder. We need to make sure we’re not just happy with where we are, we’ve got to get better too. We’ve got to push, because May isn’t when they hand out the big trophy. We need to make sure we’re on our game when it counts.”

As far as his own situation is concerned, Larson is a bit surprised that he is where he is right now. The winner of the Coca-Cola 600 as well as the Pennzoil 400 at the Las Vegas Motor Speedway currently sits second in the standings and is the only driver to have led more than 1,000 laps this season. But he knew the organization he was coming to, after having to sit out most of last year under suspension from NASCAR, was certainly capable of performing well.

“I did not expect to be this good,” Larson admitted. “I had hoped to. It’s still early in the year, but I don’t know, I knew I would be good. Chase Elliott won the championship last year, and Jimmie(Johnson) had one of the fastest cars every race. They just kind of had some issues, and they didn’t get the finishes that they quite deserved. I had that in the back of my mind and thought, well, if Jimmie had the fastest car, maybe we would still continue to have one of the fastest cars this year, and Cliff(Daniels, crew chief) and everybody at Hendrick Motorsports, they’ve probably gotten their stuff even better toward the end of the year, and it’s been awesome to see. Like looking at the scoreboard, we had four cars in the top-5 is pretty dang cool.”