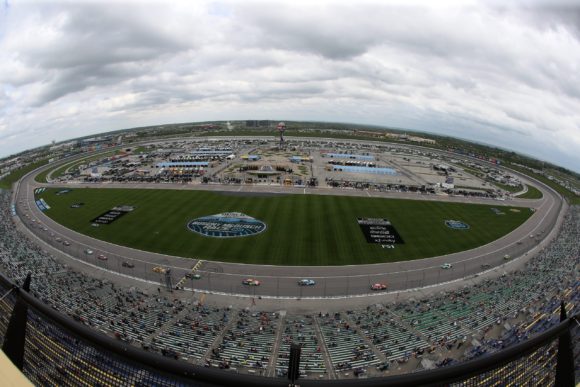 No professional sporting organization wants to be seen as manipulating the outcome of its events. And typically, the harshest of penalties are often doled out by the various leagues when it is believed that anyone has acted in a way that will bring about an artificial result. Recall, for example, the instance in which Michael Waltrip Racing had one of its drivers intentionally spin to bring out a caution so that another of its drivers could make the NASCAR Playoffs(Chase).

One of MWR’s cars was ultimately barred from the Chase and huge fine was handed down to the company as a result of the contriving.

But the reality of the matter is that NASCAR may have done something at least somewhat similar on Sunday during the Buschy McBusch Race 400 at the Kansas Speedway. Based on the timing of a caution that was held until a cycle of green flag pit stops had been completed, the sanctioning body was, in a sense, manipulating the outcome of a race.

As the field worked through its final stage, the Richard Childress Racing team for Tyler Reddick lost control of a tire during a lap 212 pit stop. The errant wheel rolled all the way across pit road and came to rest in the grass between the track and the pit lane. At the time, some cars had already pitted while others had not.

Reddick was assessed a pass-thru penalty soon after for the violation but the caution was not put out so that the tire could be retrieved until lap 231.

There have been instances in the past in which NASCAR has shown reluctance to display a yellow flag in similar circumstances due to the fact that those who had already pitted might have been put at a disadvantage. But unlike situations in which a car might have spun but quickly recovered or brushed the wall then limped to pit road, the lost tire wasn’t going anywhere.

Still, NASCAR held the caution for numerous laps until the leader of the race, Chris Buescher of Roush-Fenway Racing, finally came to pit road. Soon thereafter, a caution was called for by Race Control for the tire.

Talk on the No. 17 team’s radio indicated that the team had an idea of how things would play out. “They’re probably holding it until after we pit,” someone said as they instructed their driver to stay on track. Then, a voice added after the caution was called, “The caution was for the tire in the grass. They waited until the cycle was over.”

To be clear, it is not likely that Buescher would have gone on to win the race had a caution been called for before his pit stop. However, the running order almost certainly would have been jumbled and pit strategies might well have been adjusted to suit the situation.

Of course, we can never know what might have happened. But the point is, if the tire sitting in the grass was worthy of a caution after the pit stop cycle, it was worthy of one during the pit stop cycle. On the other hand, if it was not in a dangerous enough place for a yellow during the cycle then it was in no more of a dangerous place after the cycle had been completed.

Understandably, NASCAR was in a bit of a no win situation at that moment. Had they called for a caution on lap 212, teams trapped a lap down would have complained. Had they not thrown a yellow flag at all, many would have no doubt criticized the dangerous situation they had put others in by leaving a heavy tire and wheel resting just off of pit road. But instead, they opted for the “gray area” call of waiting for almost 20 laps before making their decision.

Again, either it was in a dangerous place at that moment or it wasn’t. For the past several years, it seems as if there have been fewer of the artificial debris cautions that interfered with the natural playing out of races. And granted, this was a tough decision to make and one that could be criticized from all directions. But something about the way it all played out just didn’t feel right.

Either calling for the caution immediately or not calling for it at all would have been a lucky break for some and unlucky for others but that’s just the way of things in racing.