William Byron and Rudy Fugle clicking on all cylinders for HMS 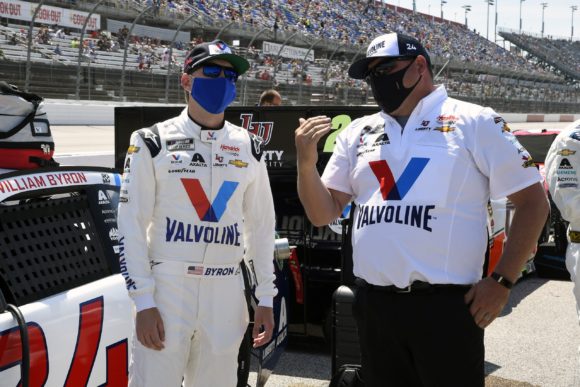 If a follower of the NASCAR Cup Series had been told coming into the 2021 season that after twelve races there would be a driver who was working on a string of ten consecutive top-10 finishes several names probably would have come up before arriving at William Byron as the choice. However, that is exactly the case for the 23-year-old driver of the famed No. 24 Chevrolet for Hendrick Motorsports as the Charlotte native has collected one win as a part of those top-10 results which have him ranked third in the overall standings.

Compared to the first twelve races of the disjointed 2020 season when Byron had not yet won and had amassed only four top-10s, it is easy to point out that there has been a dramatic improvement for this driver who is currently in the midst of his fourth full campaign at the Cup Series level.

So what has spurred this significant improvement?

One obvious place to point is the top of the No. 24 team’s pit box. Byron had been paired with crew chief Rudy Fugle while driving on the NASCAR Camping World Truck Series for Kyle Busch Motorsports. The duo won seven of the 23 races on the schedule that season on their way to a fifth place result in the final standings. And now, the duo has been reunited as crew chief and driver under the HMS banner.

During a NASCAR Media availability earlier this week, the first year Cup Series crew chief discussed his team’s performance to this point in the season, his relationship with his driver, and the transition from trucks to the sport’s top level.

“We’re growing week-by-week and learning, I’m learning more than they’re learning, and starting to get a feel for the cars and the setups and everything that’s different about the Cup Series,” Fugle stated. “The guys and everybody at HMS are doing a great job helping me get to where we need to be. William’s doing an awesome job and our feedback and communication is getting better weekly. All of that stuff is going great.”

According to the 36-year-old pit boss, a number of factors have gone into the win achieved in the third race of the season at the Homestead-Miami Speedway and the string of solid finishes posted since that triumph.

“We’re just getting better every single week at everything,” the Livonia, NY native explained. “Our pit stops are getting better and better every week and more consistent. We may have(a bad) stop here or there, but overall, we’re way better on pit road. The communication between Tab(Boyd, spotter) and William and myself is going well and we’re making good adjustments during the race.”

While many of the pieces are in place to allow their young driver to contend for wins and a championship, Fugle is looking for even better performance as the season plays out.

“Engineering, Chevrolet, everybody involved, and all the mechanics are building great race cars and we’re not having any mechanical problems and we’re not really having any problems getting through tech,” he pointed out. “We’re having a lot of good things to happen and no big mistakes. We haven’t had enough big splashes to run in the top-5 as consistently as we want to but we’re building on that and I think we’re getting there.” 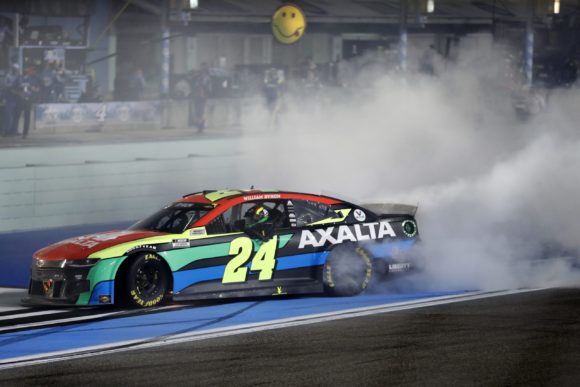 The Rudy Fugle-led No. 24 won at Homestead with driver William Byron(Photo: Getty Images)

Fugle knows what it takes to lead a successful team. He earned 28 wins as an NCWTS crew chief at Kyle Busch Motorsports and was part of two championship efforts with drivers Erik Jones and Christopher Bell while there. And with the resources available at HMS, he believes even more success is achievable.

“I think we’re very prepared,” he declared. “Moral is high here. We’re running well and we’re trying to build good products and keep winning some more races. Everybody here at Hendrick has given us a great race car to work with. The product to start with has been very good so we start with a good product and we tune on it. William has been very involved with setups and what wasn’t well before and going good and what we can do better by bringing in some small pieces here and there. We’ve made some good decisions and we’ve had some good luck and we’ve capitalized.”

Fugle was called upon to take over for Byron’s former crew chief, Chad Knaus, when the seven-time championship winning team leader was promoted by Hendrick Motorsports. It was a move that both he and his driver had hoped would come to fruition because of their past experience with each other.

“It goes back to when we were racing trucks together,” Fugle said. “We had, obviously, a great relationship, we worked well together and it was fun working together and we learned. He progressed a ton then he had different crew chiefs through the way and he’s always said that he wanted me on the team but we just had to wait for the right time and this was the right time so it worked out. I think it was proven to be the right time so that’s everybody at Hendrick making that decision and William and myself being patient and waiting for the time to make the change.”

With everything taken into account, Fugle believes his team should not be consider a surprise. Rather, they are doing what ought to be expected of them.