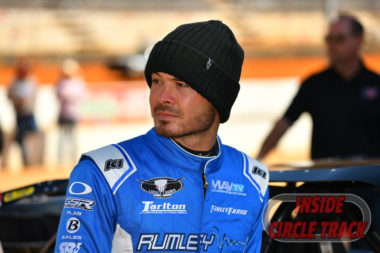 With the NASCAR Cup Series race on the dirt covered Bristol Motor Speedway fast approaching, one of the major concerns will be how the racing surface will hold up with heavy machines that have not raced on dirt in decades ripping around it for 250 laps. To prepare for the Food City Dirt Race, several NASCAR drivers entered last week’s Karl Kustoms Bristol Dirt Nationals to get a feel for the half-mile speedway. Among those drivers were Kyle Larson and Kyle Busch.

On Friday night, Larson set the fast time in qualifying then went on to win his heat race which earned him an outside front row starting spot for the 25-lap feature race. After a race-long battle for the runner-up position with Jonathan Davenport, Larson eventually came home second behind Chris Ferguson. After the race, Larson appeared in the BMS Media Center to answer questions for the reporters on hand.

“The track is fun,” the Elk Grove, CA native declared when asked about track conditions. “It’s got bumps and characteristics which make the groove open up a little bit. It’s definitely cool. I don’t know exactly what I learned after racing this race for the Cup car. Just watching how they prep the track, which they did a lot of before the feature. I guess will just pay attention to that kind of stuff.”

The races held on Friday and Saturday nights were the first for Busch in a Dirt Late Model since the 2012 Prelude to the Dream at Eldora Speedway. The Las Vegas native primarily used the weekend to turn laps on the track prior to this weekend’s Cup Series event. Still, the two-time NASCAR champion was impressive as he won his B-main race on Friday then stormed from the back of the pack to finish second in Saturday’s last chance race. He posted final results of 13th and 11th in the two feature races.

Busch came to the BMS Media Center following Saturday’s run. He admitted he has some concerns regarding the heavier stock cars on the dirt covered high-banked track. 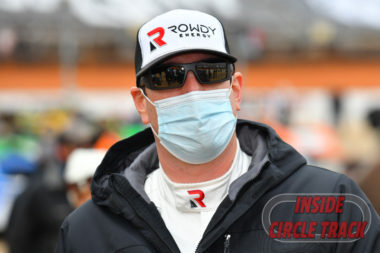 “I learned that you’ve got to let the race track widen out to put on a good show, to put on some good racing, to get some multi-groove action going,” Busch replied when asked what he learned from two nights of racing on the dirt. “Last night was just so single-file around the bottom in one and two and then around the bumps in three and four. Tonight there were bumps in one and two, or holes I should say, rather large holes. They’ll have to make sure they get that fixed. Our stock cars going through those are just going to get demolished. Thirty-four hundred pound cars and low to the ground and all that stuff. I guess we’ll just have to put them up on height blocks and race them around here like jalopies.”

Larson again drove to another second-place finish on Saturday night behind $50,000 winner Jonathan Davenport. ‘Yung Money’ was more encouraged about the track after the second feature in regard to how the Cup race will play out.

“I think it’s fine,” Larson said of bumps that appeared in turn three on Saturday. “Like I mentioned, I like the ruts and stuff. It adds character. I mean, they have a whole week to fix it so I’m sure they’ll smooth it out. It forces you to run high to go around them which I think opens up some lanes so I like that part of it.”

The driver who won more than 30 dirt features in various types of cars during the 2020 season believes that less track prep rather than more might bring about the best racing conditions this weekend.

“The dirt here is really good when they let it clean off so hopefully with all the laps we have here next week it will clean off and widen out so we can run multiple grooves,” he stated. “After today, I think there’s a lot of promise for a good race next week. Yesterday they worked on the track a little bit too much, I thought, and never really let it get clean. Today they did so I’m pretty sure we’ll have a good race next week.”