There will certainly be no shortage of star power in the Karl’s Kustoms Bristol Dirt Nationals during the coming week at the famed Bristol Motor Speedway. No fewer than three former NASCAR Cup Series champions as well as a former Daytona 500 winner and the hottest name in all of racing will be among the drivers competing on the clay covered high banks of the track located in the northeastern corner of Tennessee.

When the decision was made to cover the normally concrete-surfaced half-mile track with dirt for the purpose of hosting NASCAR’s first Cup Series dirt race since the early 1970s, it was also decided that other events for cars specifically designed to race on that type of surface could be held. Thus was born the Bristol Dirt Nationals which will provide racing in numerous classes during the week of March 15-20.

Due to the fact that the NASCAR Cup Series will be staging a one-day show at the Atlanta Motor Speedway on Sunday, March 21st, the racing calendar has been freed up for drivers who regularly compete on that tour to race on the dirt at BMS in the days before. Not only will they be racing for the sake of competition but also to gain some additional experience on the surface and the track where they will contest a points-paying event on their regular series the next week.

The highlight of the week-long event will be a pair of Super Late Model shows with the Friday night affair paying $10,000-to-win then a Saturday night feature doling out $50,000 to the victor.

As a result of the scheduling opportunity, defending NASCAR Cup Series champion Chase Elliott along with other former titlists Kyle Busch and Joey Logano will take part. 2018 Daytona 500 winner Austin Dillon, 2021 Daytona 500 top-10 finisher Corey Lajoie, and Kyle Larson, who recently won the Cup Series race at Las Vegas Motor Speedway, will be ripping it around the cushion of the dirt oval. 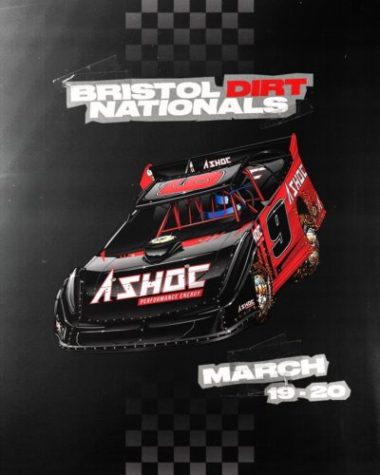 The Bristol Dirt Nationals will simply serve as a continuation of Elliott’s non-NASCAR racing tour. Since securing the title last year at the Phoenix Raceway, the Dawsonville, GA racer has competed in the prestigious Snowball Derby for Pavement Super Late Models, the Chili Bowl Nationals for Midget Sprint Cars, then the IMSA-sanctioned 24 Hours of Daytona.

The second generation driver raced Dirt Late Models early in his career at venues such as Tri-County Race Track in Brasstown, NC and Volunteer Speedway in Bulls Gap, TN. The now 25-year-old driver often drove cars prepared out of the stable of veteran racer and promoter Ray Cook.

Kyle Busch will be a teammate of three-time Lucas Oil Late Model Dirt Series champion Jonathan Davenport. The Longhorn Chassis cars those two competitors will wheel around BMS are owned by Arkansas businessman Lance Landers. The 2015 and 2019 NASCAR Cup Series champion has extensive short track racing experience having won the Snowball Derby in 2009 and 2017 although his experience is not as prolific in a Super Late Model on dirt.

Joey Logano is another driver who is looking to add some experience on dirt before the Cup Series cars roll into ‘Thunder Valley’. The 2018 NASCAR Cup Series champion raced a Modified car during SpeedWeeks earlier this year at Florida’s Volusia Speedway Park and will again take the wheel of one of those cars in Bristol.

Austin Dillon will enter competition in the 604 Crate Late Model division in a Rocket Chassis prepared by Cory Hedgecock Motorsports out of Loudon, TN. The grandson of legendary car owner Richard Childress began his racing career on clay and will look to add to his experience level in Bristol as he prepares for the Cup Series Food City Dirt Race on March 28th.

Like Dillon, LaJoie will drive a 604 Crate Late Model out of the Cory Hedgecock stable. Unlike Dillon, however, LaJoie has virtually no experience on dirt and will be looking to get a feel for that type of surface before competing for points the following weekend.

And perhaps no driver captured the imagination of race fans of all disciplines more than Kyle Larson did in 2020. Following a suspension from NASCAR due to the use of an inappropriate word during an iRacing.com event, the California native went on a tear through the Sprint Car ranks and even into Late Models throughout the summer and fall of the pandemic-impacted year. 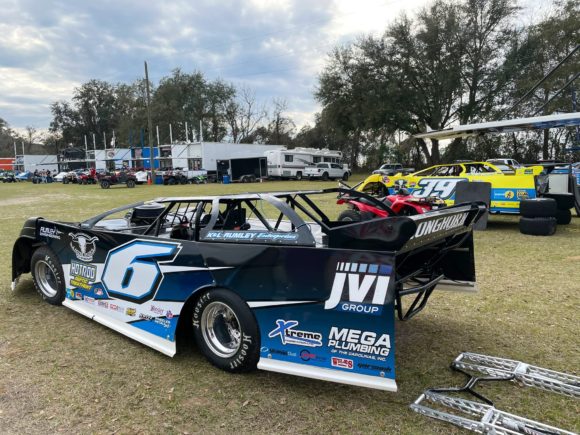 The K&L Rumley Late Model to be driven by Kyle Larson at Bristol(Photo: Longhorn Chassis)

Larson won a Lucas Oil Late Model Dirt Series feature at Pennsylvania’s Port Royal Speedway in 2020 then followed that up with a dominating victory in that tour’s 2021 season opener at All-Tech Raceway in Florida back in January. As he did in those races, the Hendrick Motorsports regular in NASCAR will pilot a Longhorn Chassis prepared by K&L Rumley Enterprises in the Super Late Model division in Bristol.

Some of the biggest stars to ever drive Dirt Late Model race cars as well as the other classes will be competing for big prize money during the coming week at Bristol Motor Speedway. Along with those dirt racing regulars, there will be a strong contingent of NASCAR stars looking to not only compete for a win but also gain knowledge that might help them win in their NASCAR event later on in the Food City Dirt Race.