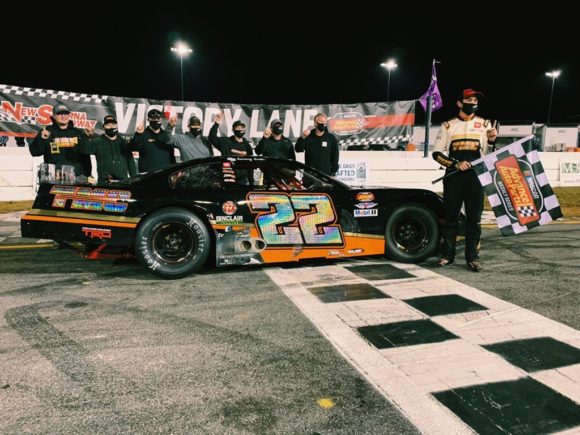 While the Super Bowl was going on across the state, the 55th annual World Series of Asphalt was taking place at the New Smyrna Speedway. The Super Late Model division staged third feature on Sunday night with Sammy Smith coming away from the Florida track as the winner in a race shown live by NBC TrackPass. It was the Des Moines, Iowa driver’s first victory since joining the Donnie Wilson Racing team to drive cars produced by Rowdy Manufacturing after having driven for Kyle Busch Motorsports previously.

An invert of the top-8 placed Moore on the pole with Mondeik, Smith, Noland, Pollard, Goede, Dye and Love lining up in order on the grid.

Moore went to the lead at the star of the 35-lap feature with Mondeik, Smith, Noland and Goede trailing. Smith went on the move early as he passed by Mondeik for second on the second circuit while Pollard and Goede went side-by-side for fifth just a bit further back.

The first yellow flag of the night waved on lap 6 when Pollard spun while racing with Noland and Goede while racing for positions 4-6. On the ensuing restart, Smith surged to the lead over Moore. Just outside the top-5, Stephen Nasse began to move forward from his sixth row starting position as he raced with Goede.

A lap 8 caution was displayed to the field for Steve Weaver to again slow the action.

Just after that restart, Noland and Goede battled hard for fourth for two laps with Nasse lurking just behind. Suddenly, however, something appeared to break on the Noland car which sent him hard into the turn one wall on lap 11.

Smith continued to lead as the field circulated under that caution period with Moore, Mondeik, Goede, Nasse, Love, Dye, and Garcia in his tire tracks.

Smith maintained control of the race when green flag action resumed with Mondeik, Moore, Goede, and Nasse running in single-file formation behind the leader. As the laps clicked away, the best battle on the speedway was that between Goede and Nasse for fourth. At the same time, Garcia fought to hold back Dye, Griffith, and Fredrickson as they contested positions 7 through 10.

Ultimately, however, it was Smith who beat the field to the checkered flag to claim the victory.

“It means a lot,” Smith declared in victory lane. “The last two nights we were just okay. We needed to work on a couple of things but this whole Donnie Wilson Racing team. They got it good tonight.”

Smith pointed out how the lap 6 restart created an opportunity for him to move to the lead.

“It felt like that restart played in my favor,” he said. “The 74 car(Moore) was tight. He bottomed out getting into the corner so that played to my advantage.”