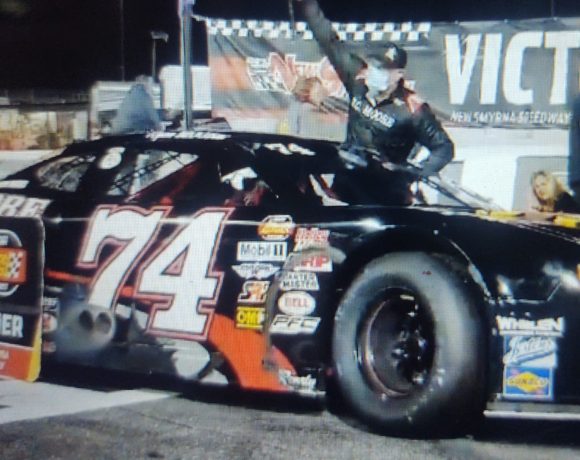 The 55th annual World Series of Asphalt got underway on Friday night at Florida’s New Smyrna Speedway. The David Rogers Super Late Model division took to the historic track for the first time in this year’s version of SpeedWeeks in a race shown live by NBC TrackPass. After an intense and sometimes chaotic evening of racing, it was former World Series champion Ryan Moore who scored the win and earned early bragging rights among his competitors.

And invert of the top-4 qualifiers placed Moore on the pole for the main event.

At the start of the 35-lap feature, the first three rows ran the first lap side-by-side with cars making contact throughout the field. Finch, who was making his first SLM start, was scored as the leader with Moore counted as second followed by Goede, Noland, and defending World Series champion Griffith. Moore and Finch traded positions on the second circuit along with Goede and Noland doing the same just behind.

A caution flag waved after two laps which set up a restart that would prove disastrous for some. Finch restarted on the outside of the front row and appeared not to come up to speed when the green flag waved and went for a spin after contact from behind. The accident collected Fredrickson and Swanson causing significant damage to all three of those machines.

At the time of the yellow flag, Moore was leading Goede, Griffith, and Noland.

When the race went back to green flag action, Moore lead the way with Goede, Noland, and Griffith trailing in single-file formation. As the race approached the halfway mark, Noland closed in on Goede for second as Moore pulled away. Noland would get by Goede after contact between the two cars on lap 18.

Further back, Mosack, Mondeik and Smith fought over positions 5-7. Eventually, Mondeik would get by Mosack to take fifth.

The leaders closed in on slower traffic with less than 10 laps remaining in the feature as Noland drew to the rear bumper of Moore until a caution flag for the spinning car of Doug Elliott set up a final dash to the finish with two laps to go.

Moore broke on the final restart leaving Noland and Griffith to battle side-by-side for the runner-up position. Ultimately, it was the 2013 World Series of Asphalt champion Ryan Moore who would claim the night 1 victory.

“We’ve been down here a long time,” Moore said in his post-race interview. “We’ve been good, we’ve been bad, we’ve been all over the board. We built a new car, not there’s anything wrong with our old car but we just wanted to get ready for a new challenge and got with Rowdy(Manufacturing) and built this car. We’re going to be a force to reckoned with this week.”

The veteran driver knows that this win is a step toward the ultimate goal.

“It’s huge. You’ve got to have a good finish in every race. We’ve got to be consistent, we’ve got to be fast. We brought our A game, we’re ready for it.”