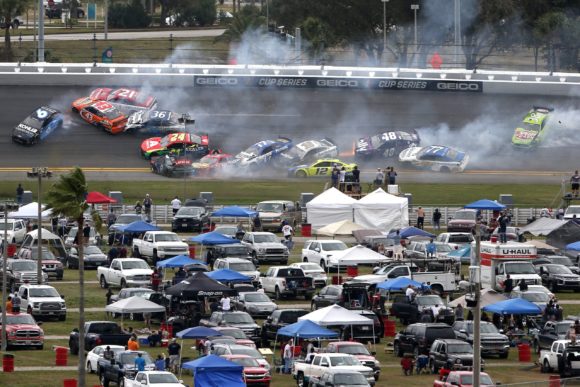 During today’s race I will be offering a ‘Live Updates’ sort of blog presentation on this page that will feature updates of the significant moments within the Daytona 500, driver quotes from those moments, scanner chatter, and running orders throughout the day as well as the  final finishing order.

These updates will be in addition to posts from @RichardAllenIDR & @ICTwebsite on Twitter.

Scroll through the page regularly as information will be added frequently.

The 63rd annual Daytona 500 will be aired live on Fox with ‘NASCAR Race Day’ beginning at 1:00pm(eastern). Actual race coverage begins at 2:30pm. Engines will be fired just before 3:00pm with the green flag set to wave shortly afterwards.

MRN will provide radio coverage of the race beginning at 1:30pm.

The starting lineup was determined by a combination of qualifying, where the top-2 were locked onto the starting grid, and two ‘Duel’ races which set the remainder of the field.

Drivers having to drop to the tail of the field prior to the start due to various changes include: William Byron, Brad Keselowski, Chase Briscoe, Kaz Grala, Anthony Alfredo, Cole Custer, Ross Chastain, Erik Jones, and Martin Truex, Jr.

The weather forecast calls for scattered thundershowers this afternoon in Daytona Beach, FL.

1:50- The No. 23 Toyota of Bubba Wallace failed pre-race inspection twice. A crew member has been ejected by NASCAR and the car will have to start from the tail.

Bubba Wallace to pit road for damage to the left rear of his car. Possible contact with Cope. The 23 is back out at the tail of the field.

Lap 15- Red flag for a lightning strike in the are. Cars will be on pit road until lightning/rain is done.

3:50- Rain appears to have slowed or stopped. Air Titans working to dry the track.

3:56- Reports are that rain has returned.

Quote from Alex Bowman regarding the big crash- “It looks like he(Almirola) kind of got turned sideways and there I was the guy that got ran into. Bummer, I hate it for Ally. Obviously, we had a really fast Camaro. The Chevrolet’s were working good together. Hopefully a Chevy still ends up in Victory Lane.”

4:38- NASCAR reporting just an occasional sprinkle all the way around the track.

Quote from Joey Logano, who was in the middle of three-wide when the lap 13 crash occurred- “It was real close. In the middle is sometimes the hardest place to avoid a crash. I saw a car going to the outside wall and my only chance was to go to the inside. The thing I noticed was how many cars went into the grass and destroyed their cars. That’s something to put in my memory bank.”

4:44- NASCAR sending the Air Titans back out to the track.

5:20- NASCAR still working to dry the track but there is a long way to go.

6:30- NASCAR sending the Air Titans back on the track and declares that “Radar shows that we might have a window.”

8:00- Track workers report that they are making significant progress drying the track.

8:47- Drivers have been called to their cars.

The 6-minute damage repair clock has expired for Buescher, DiBenedetto and Alfredo. They are eliminated from the race.

Taking the green with 64 laps to go.

Big crash on the last lap when Keselowski and Logano got together. Michael McDowell gets his first career win.