Skip to content
Home NASCAR Blogs Which organizations will benefit most from driver shuffles?

Which organizations will benefit most from driver shuffles?

The driver lineups of some of NASCAR’s major organizations will look a little different from last year when teams arrive at the Daytona International Speedway in February to kick off the 2021 Cup Series season. Joe Gibbs Racing, Stewart-Haas Racing, Hendrick Motorsports, and Chip Ganassi Racing have each shuffled their driver lineups as they prepare for the upcoming campaign.

And as has been the case over the past few seasons, the trend continues to be that of replacing older veterans with much younger drivers as three of the four stated teams did. 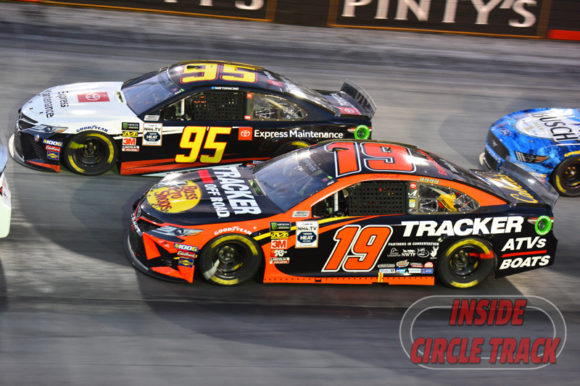 Martin Truex, Jr. will remain in the No. 19 Toyota for JGR while Christopher Bell left the No. 95 for JGR’s No. 20

It was a substandard year for all of the Joe Gibbs Racing teams except one in 2020. Denny Hamlin and his No. 11 Toyota kept JGR at the front of the pack while usual championship contenders Kyle Busch and Martin Truex, Jr. only won one race each and both would have required significant improvement during the NASCAR Playoffs to have been considered serious title contenders. This is an organization that earned a total of 19 checkered flags in 2019 but dropped off significantly this past season.

While that drop off certainly could not be considered the fault of any one driver, there would be a single pilot at JGR who would ultimately lose his ride.

Erik Jones entered 2019 with only one year remaining on his contract and speculation about his future with JGR heightened when he was given an extension that would only get him through the 2020 campaign. After failing to win a race this past season, the once highly touted driver was informed that he would not be offered another extension so that the organization could make way for Christopher Bell.

While age doesn’t really factor into this equation, Bell is certainly considered one of the rising young talents in NASCAR. But then again, so was Jones a couple of years ago. Ultimately, the question is, did JGR get better overall by subtracting Jones and adding Bell.

Obviously, the answer to that question can’t be fully known until some time has passed. However, things just weren’t working out for Jones at JGR in the Cup Series for whatever reason. In the good years for this organization, his No. 20 car struggled to keep pace with its stablemates. Since 2018, Jones has won two races while his teammates have scored 35 victories. Granted, Bell did not exactly have a stellar year in 2020 driving for Leavine Family Racing, but that was far from a championship caliber team, especially after they announced midseason that they would be leaving the sport.

Overall, one would have to come to the conclusion that JGR will get better with the addition of Bell simply because they were getting very little from Jones. 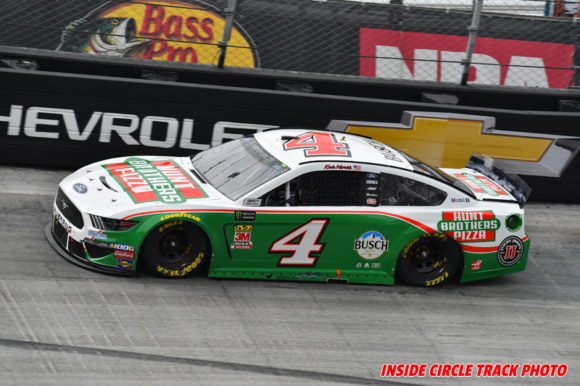 Kevin Harvick carried much of the workload for SHR in 2020

Stewart-Haas Racing was very much a one horse show in 2020 as Kevin Harvick dominated within the company by collecting all but one of the trophies they amassed. The No. 4 Ford achieved nine first place finishes while rookie Cole Custer added the organization’s only other win when he used a spectacular restart at Kentucky to beat the field back to the checkered flag. Drivers Clint Bowyer and Aric Almirola were unable to find victory lane during this disjointed season.

At the same time, Chase Briscoe turned in a stellar NASCAR Xfinity Series effort in 2020 as Bowyer and Almirola were going win-less throughout the Cup Series season. It became somewhat obvious by mid-year that the up-and-coming star would replace someone in the SHR lineup and it was just a matter of who that would be. Eventually it was Bowyer who traded the driver’s seat in the No. 14 car for the television commentator’s chair to free up a spot in the SHR lineup.

Bowyer had made the NASCAR Playoffs in each of the past three seasons but had not earned a win since 2018. And more, Ford Motor Company wanted to see Briscoe move up to the sport’s top level. So like JGR, the question of whether or not this off-season move will help SHR has to be asked.

And as was the case with JGR, time will be the ultimate judge. However, replacing the 41-year-old Bowyer with the red hot 26-year-old Briscoe would appear on the surface to be the right move. Apart from his win at Kentucky, Custer did not have a particularly awe-inspiring rookie season with this organization and the struggles may very well be similar for Briscoe. But over the long haul, this move will almost certainly work out in favor of SHR. 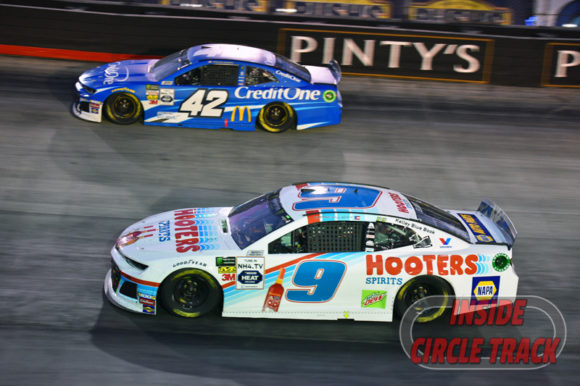 It was believed that HMS wanted Kyle Larson prior to the season to fill the expected vacancy within its driver lineup, knowing that the highly coveted driver’s contract with Chip Ganassi Racing was set to expire at the end of the 2020 campaign. But the unexpected events that would unfold along the way cast at least some doubt on the issue.

Larson was heard to utter a racial slur into an open microphone during an iRacing event when all other forms of racing were shutdown due to the pandemic. As a result, sponsors threatened to leave CGR to avoid a backlash which, along with an indefinite suspension by NASCAR, prompted Larson’s removal from the No. 42 car. After that, the excommunicated Larson went on an unbelievable romp through the dirt racing world that saw him collect wins in Sprint Cars, Midgets, and even Late Models.

HMS ultimately landed Larson to drive its No. 5 Chevrolet machine after he was reinstated for competition by the sanctioning body. No doubt, the driver’s asking price fell after his regretful error, but nonetheless, he wound up where many always thought he would.

So, did HMS improve itself with the addition of Larson?

The answer to that question is absolutely yes they did. While the 45-year-old Johnson will go down as one of the greatest drivers in NASCAR history, he had clearly lost his form over the past three seasons. Meanwhile, the 28-year-old Larson appears to be just hitting his stride and will have the opportunity to reach his full potential with one of the top companies in all of motorsports. 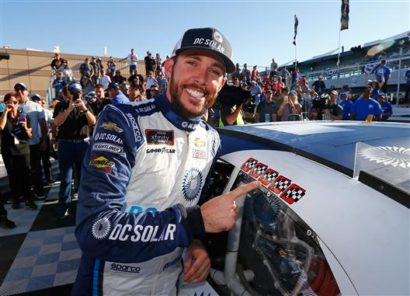 Chip Ganassi Racing knew that the likelihood of keeping Kyle Larson in the fold beyond 2020 was not high but his departure after the fourth race of the season came as a surprise. Following the aforementioned racial slur and subsequent suspension, CGR was left in the position of having to change drivers midstream at a time when practice and qualifying would no longer be a part of the sport.

While bringing Matt Kenseth in to fill the void left by Larson made sense in the respect that it gave the team time to weigh all of its options, the on-track results posted by the No. 42 car proved to be disastrous. The 48-year-old former Cup Series champion managed only one top-5 and two top-10 finishes in 32 races after Larson had driven the No. 42 Chevrolet to three top-10s in the first four races.

CGR has announced that 28-year-old Ross Chastain will assume the role of driver in the No. 42 in 2021. It will be Florida native’s first shot in what would be considered a competitive car at the top level although he has seen success in the NASCAR Xfinity Series, including a win in a CGR car, and in the NASCAR Camping World Truck Series.

It would be hard to imagine the No. 42 not having improved results over the course of the 2021 season considering that the bar is set relatively low. And perhaps more importantly for this two-car operation is that there should be more competitive feedback coming in to also assist the crew of Kurt Busch’s No. 1 ride as well.

A look at the changes made by Joe Gibbs Racing, Stewart-Haas Racing, Hendrick Motorsports, and Chip Ganassi Racing would seem to indicate that each has helped itself going forward. However, logic tells us they can’t all be better. So what will the real answer to the question of which organizations will benefit most from driver shuffles actually be?

The best guesses would probably go something like this:

Joe Gibbs Racing will be better in 2021 than it was in 2020 because it would be hard to imagine Kyle Busch and Martin Truex, Jr. having two consecutive seasons in which they only win one race each. And although his performance may not necessarily keep pace with his teammates, Christopher Bell will probably add more to the overall output in 2021 than Erik Jones did in 2020, especially considering that he has one season at the Cup Series already under his belt.

Stewart-Haas Racing will remain a one-car dominant operation with Kevin Harvick carrying the vast majority of the load. Aric Almirola and Cole Custer may be improved over last season but only marginally. No matter how successful he was in the Xfinity Series, Chase Briscoe will still be rookie and will go through the same struggles that virtually every rookie faces.

Hendrick Motorsports will be vastly improved because of Larson’s addition and because this appears to be an organization looking to return to its championship form of a few years ago. The youth movement that was initiated over the past five years or so has come fully into fruition and will bring about significant success for the next decade.

Chip Ganassi racing will be better in 2021 than in 2020 as an overall operation, but ultimately, this is a one or two win per year company at best.

So there it is, some of the sport’s top teams no doubt helped themselves this year but some will see more improvement than others.