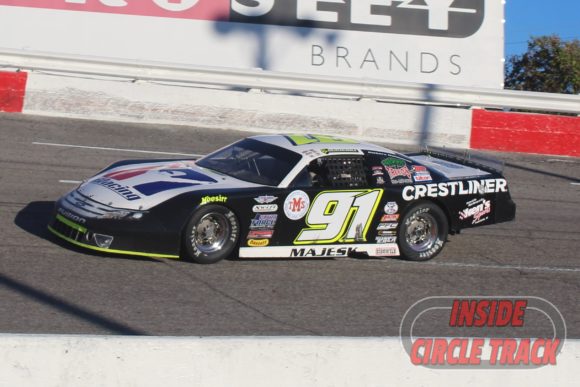 The Snowball Derby played out on Sunday afternoon at the Five Flags Speedway for the 53rd time in its history as drivers and teams sought the most prestigious trophy in all of pavement short track racing. At the end of the day in Pensacola, Florida, it was Ty Majeski who wrote his name in the history books as the 2020 Snowball Derby champion. The Seymour, WI driver earned $25,000 and the coveted Tom Dawson Trophy for his efforts.

It was a race of redemption of sorts for Majeski as he came close in 2019 before a crash on a late-race restart robbed him of a chance to win.

Derek Thorn had posted the fastest lap in time-trials during a Friday night session with an effort of 16.258 seconds around the half-mile oval. He was then offered the opportunity to start from the tail of the field which would give him the chance to add a $25,000 bonus to his earnings should he win the race from there.

Thorn chose not to accept the challenge, and thus, started the race from the pole.

At the start of the 300-lap main event, Thorn took the early lead with Honeycutt, Majeski, Dye and Butcher trailing. A pair of No. 51 machines began to moved forward in the initial laps as Nasse, who appeared to have won this race last year until a post-race inspection doomed his race, and former NASCAR Cup Series champion Busch began passing cars on their way up through the pack.

Honeycutt took the lead away from Thorn just before the first caution flag was shown to the field when Mason Diaz crashed on lap 27.

Busch and Roderick teamed up to pass by Nasse for the fourth and fifth positions respectively on lap 35. However, Nasse would fight back ten laps later as he rejoined the top-5 by passing Roderick.

While picking their way through traffic the top-6 of Thorn, Honeycutt, Majeski, Busch, Nasse and Roderick ran in tight formation just after the lap 50 mark. Busch and Roderick again began to move forward in tandem as they both passed by Majeski for third and fourth respectively on lap 69.

The two Rowdy Manufacturing cars of Busch and Roderick moved around Honeycutt to gain second and third on lap 83. At the same time, Thorn had built a relatively comfortable margin ahead of his pursuers.

At the one-third mark Thorn continued to lead ahead of Busch, Roderick, Honeycutt, Nasse, Butcher, Chase Elliott, Chandler Smith, Ty Majeski, Corey Heim. However, teams got the opportunity to make changes to their cars as a competition caution flag waved on lap 108.

When racing action resumed, Thorn continued to lead as Roderick took second away from Busch then Nasse passed Busch for third shortly thereafter. From that point, however, the drivers appeared to settle in and begin clicking off laps with the exception of Smith who continued to march forward as he entered the top-5 just before halfway.

But after halfway the action again picked up behind leader Thorn as Nasse claimed the runner-up position from Roderick while Smith moved into fourth. Smith then took third away from Roderick on lap 165.

With 120 laps remaining, the comers-and-goers began to become apparent. Thorn continued to lead with Nasse and Roderick solidly in second and third. However position changes among Smith, Butcher, Honeycutt, Elliott, Derek Griffith and Busch. But Roderick began to fade quickly as the race approached the 100-to-go mark.

Casey Roderick, Hunter Robbins, Corey Heim, Michael Atwell and Ross Kenseth were involved in a major accident on the track’s front stretch on lap 204. The race had to briefly go under red flag conditions as safety crews cleaned up the debris.

Majeski moved into the second position as he passed by Nasse with just under 80 laps remaining. Nasse then slowed and pulled onto pit road and out of the race with mechanical issues.

As the began to wind down, Elliott began to show strength as he moved around Smith for third behind Thorn and Majeski with 45 laps remaining. At the same time, Majeski began to close in on Thorn as the lead dup raced among slower traffic.

A big crash for Jurkovic following contact from Griffith brought out another yellow flag to set up restart that would come with under 10 laps to go. The Snowball Derby rules call for the event to end with five green flag laps which would sent the race to overtime.

Over the closing laps, Majeski and Thorn engaged in an intense side-by-side battle with each leading laps over the final five circuits. But it would be Majeski who would emerge from that fight to sail under the checkered flag.

Majeski’s car cleared post-race inspection and he is officially the winner of the Snowball Derby.