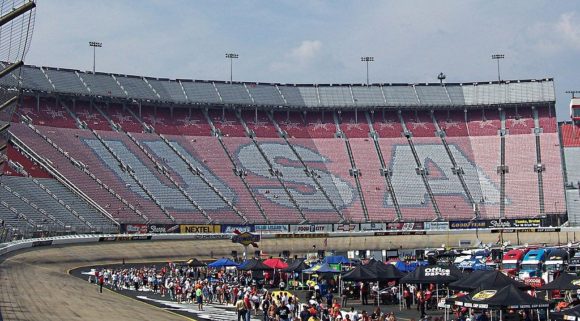 Even though few if any fans were in attendance at NASCAR races in 2020, the sport continued on(Photo: Getty Images)

It’s easy to find negatives from the year 2020. If you don’t think so, just look at social media and read all the negativity spewing from Facebook and Twitter everyday. But instead of focusing on the bad, a look at the positives that came from this soon-to-be-finished year would make for a much better way to dive into the New Year.

NASCAR provided plenty of positivity to at least briefly turn the attention of its fans away from coronavirus, shutdowns, politics, natural disasters, and all of the other difficulties faced in America and the world during the past year. For two or three hours between the drop of the green flag and the waving of the checkered flag on 36 race days, the sport’s followers had an opportunity to think about pit strategies, fuel mileage, door banging, and passes for position.

First and foremost, NASCAR got itself back up and running as quickly as was safe to do so following the pandemic shutdowns. Under the direction of President Steve Phelps the sport instituted extensive safety measures in conjunction with state and local government officials in the locales of each track that would be used during the sport’s return to action. As a result, the sanctioning body was not only able to resume its schedule more quickly than virtually every other sport but it did so safely with no major outbreaks of the virus being reported.

Of course, two prominent drivers(Jimmie Johnson & Austin Dillon) did have positive COVID-19 tests but compared to the numbers of positives in other sports, NASCAR came through the season quite well.

NASCAR performed a Herculean task to get itself back up and running as quickly as it did by not only instituting comprehensive safety protocols but also working out the monumental task of logistics that would be required for this travelling show to hit the road. Some venues had to be replaced on the schedule while others had to be used more than initially planned and some were even used that had not been planned for use at all. And not to mention, the calendar of events played out in ways it never had before in order to get the full 36-race schedule completed on the date at which it was supposed to be completed.

NASCAR, its leadership, its teams, its tracks, and its marketing partners all deserve tremendous praise for what they were able to accomplish in 2020.

More than all of that, NASCAR and its broadcast partners, sponsors, and iRacing.com were able to provide entertainment for fans by way of virtual competition during the shutdown. These events were shown live with innovative features such as driver commentary during the race along with unique camera angles and even features that highlighted the skills needed to be good at that particular craft.

Perhaps new fans were even lured in by the iRacing productions while, at the same time, drivers who might not always be recognized during an actual race broadcast received attention during these airings. To get all of that organized with the appearance of being seamless called for yet another great effort by all who took part.

As stated above, one of the keys to NASCAR’s success in 2020 came from the fact that it was willing to work outside the box. A sport that had often seemed too rigid in the past enacted numerous changes and made more than a few adjustments on the fly in order to complete its season. For example, there had never been any intention of racing on the Daytona Road Course in January of 2020. Multiple races at Darlington, mid-week races, double-header event weekends(apart from the already planned weekend at Pocono), and back-to-back races on the same track would have been considered unthinkable before the season began.

Add to those adjustments, running races with no qualifying and no practice would have drawn tremendous criticism had an announcement of such been made last January. But in the midst of a pandemic, the sanctioning body, the tracks, and the teams did what they needed to do to get the races in and the season completed on time.

NASCAR also worked through what could have been potentially very messy social issues this past year. When Kyle Larson made the terrible mistake of using a racial slur during an iRacing event, he was suspended by the sanctioning body for the remainder of the season. But after his time was served, he was then reinstated after apologizing working through mandated sensitivity training. 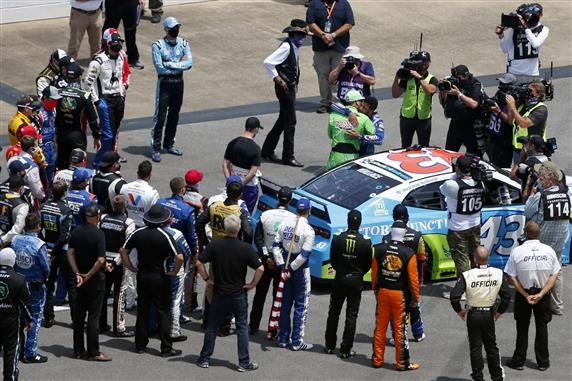 Drivers and crew members gathered around the car of Bubba Wallace at Talladega(Photo: Getty Images)

After what was initially thought to be a noose intended as a racially motivated threat against African-American driver Bubba Wallace at Talladega, competitors came together in an unprecedented show of unity to support their fellow racer. It was later proven that the garage pull-down rope had been fashioned in that same way before Wallace’s car was ever parked in that particular garage stall. But the demonstration by the other drivers and crew members was well intentioned nonetheless.

In both of those incidents, NASCAR’s leadership handled the issue appropriately.

As far as the on-track action was concerned, there are always going to be good races and races that are not so good. The racing in 2020 was generally pretty good, which is ultimately the most important thing. Perhaps the lack of qualifying and practice benefitted some and hurt others although which was which may never be known.

TheAthletic.com journalist Jeff Gluck keeps a weekly “Was it a good race poll?” in which his thousands of followers on Twitter cast votes following each event. In 2020, four races reached the rarified air of receiving 90% positive reviews from fans. Another fourteen events achieved greater than 70% favorable ratings. To back up the claim that the racing this past season was generally pretty good, half of the schedule had 7/10  of respondents to approve of what they saw. 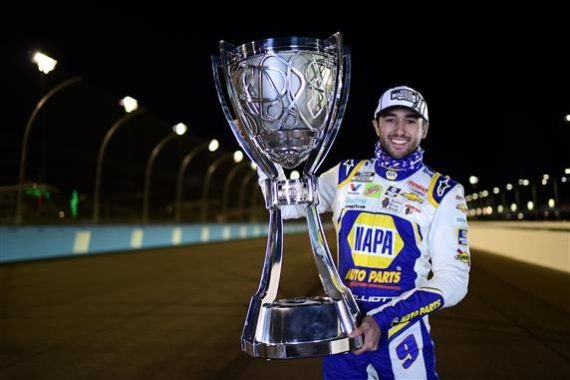 And more, the season ended with the crowning of a very popular champion. Chase Elliott has been NASCAR’s most popular driver since the retirement of Dale Earnhardt, Jr. from full-time competition. And now, the second generation racer is not only the face of the sport due to his popularity but also because of his achievements.

It never hurts for the driver best liked by fans to also have success at the highest level.

In the end, 2020 had plenty of negativity within. But ultimately, NASCAR did its best to provide some positive news as the season played out in many unexpected ways.