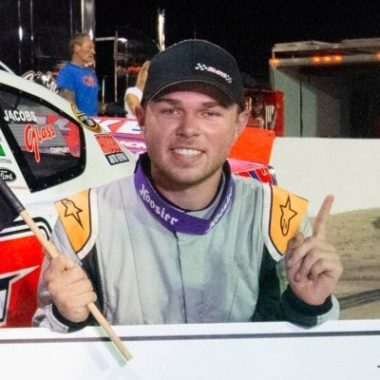 When the topic of venerable old race tracks that helped build the legacy of stock car racing in America arises, the name of the Rockingham Speedway has to be included in the discussion. The 1.017-mile speedway hosted the NASCAR Cup Series from 1965 to 2004 with fabled last names such as Petty, Earnhardt, Yarborough, Pearson, Waltrip and Allison listed as former winners. And now, the historic venue is about to be brought back to life after years of sitting idle.

This past Tuesday, the Solid Rock Carriers CARS Tour Late Model Stock Car division staged a tire test in preparation for the ‘Welcome to the Rock 100’ that is scheduled to take the green flag on March 6, 2021. Layne Riggs, Timothy Peters, and Jared Fryer participated in the session.

A second tire test is slated for next Tuesday.

Riggs enjoyed the speed associated with racing a track twice the size of one the short track-based series normally competes on. The 18-year-old driver also pointed out that much of the character associated with the rough and worn racing surface still remains intact.

“You just get that raw sense of speed, you’re using so much throttle and you’re going so fast,” Riggs recounted in an interview with InsideCircleTrack.com. “You have such a little gear in the car so you know that you’re getting really high top speeds. It’s really odd when you get that little gear because it feels like the car has no horsepower, it’s hard to even spin the tires.”

The track’s character called for the No. 99 team to adapt its setup throughout the day.

“Rockingham is such an aggressive track with a lot of banking and a lot of rough little bumps here and there,” Riggs explained. “The bumps really gave you a sense of how fast you’re going as you skip across them. We thought we were pretty well prepared with the car for a track that would be as aggressive as that but we came in and our expectations were too low. The whole race car hit the track on multiple runs and we kept having to work to get it up off the race track, which was something we weren’t expecting.”

The Bahama, NC native says that learning the nuances of the track will be one of the keys to success when the competition takes place this spring.

“The more throttle you can use the faster you’re going to be going,” he described. “One and two are very different corners from three and four. One and two are a couple of degrees flatter so we had to lift all the way off the gas at one point then slowly get back to it. The turn two wall comes up really quick so that’s the trickier corner. Three and four is more of a maintain corner so we get in there and barely lift out of the gas depending on how good your one and two was. Three and four, to me, was a lot more fun because you can use more throttle and you’re going a whole lot faster because of the banking. But I think the race is going to be won in one and two. Whoever can get through those corners better is going to be the winner.” 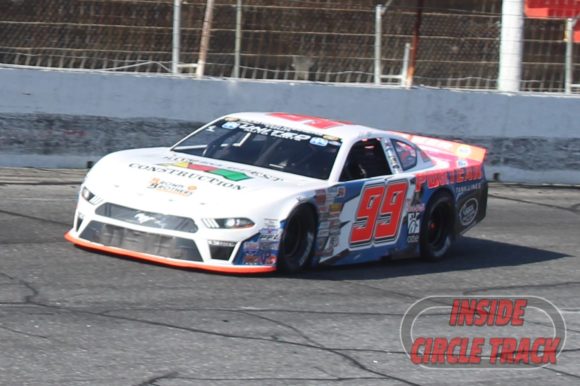 Layne Riggs in his No. 99 car at Hickory Motor Speedway

Late Model Stock Cars require drivers to maintain momentum to produce the best lap times. Unlike their Super Late Model counterparts, the LMSC machines do not have an over abundance of power at the driver’s disposal. But Riggs believes that very factor creates better racing.

“Momentum is key in Late Model Stocks, even on the short tracks we go to,” the two-time winner on the CARS Tour this past season said. “The Super Late Model is like the ultimate race car with an offset chassis, pretty much as much power as you would want at your fingertips, and a couple hundred pounds lighter. Everything a super has is what we want to do but our rules don’t let us do that, but in comparison, I think the Late Model Stocks put on a better show for that reason. I think at Rockingham, having so little power and a chassis that’s very similar to an Xfinity or Busch car from back in the day, I think we’ll put on a good show.”

There is still work to be done. General Tire wants to see how other compounds behave on the abrasive racing surface in the upcoming tire test.

“We had the one tire test and they only brought one type of compound and they were pretty confident in it, but it ended up not working out so the plan is to go back next Tuesday,” he described. “I think they want to try some different compounds to see what’s going to work. They asked me what kind of tire I would want, something really grippy that’s going to wear or something harder that’s not going to fall off that much, and I said give me the hardest thing you’ve got.”

The young driver would rather race hard than have to concern himself with tire management on a track known to wear rubber quickly. He further explained that his tires showed signs of chunking during the test due to a tight condition.

“I’m not so intrigued about having the grip and the raw speed,” he went on. “I’d rather have everybody on hard tires and everybody be able to slip and slide and race as hard as you want to. To me, tire conservation isn’t as much fun as racing as hard as you can, slipping and sliding, and beating and banging. Hopefully we can work out something with the tire compound so we don’t have to save that much tire.”

Even with the business of a tire test to conduct, the historic nature of the facility was not lost on this second generation racer.

“For sure, especially when you first arrive at the race track,” Riggs replied. “The track, with the condition it was in, was kind of like an antique. It definitely brought those memories up. I’m just glad we’re able to do something like this and race on such a historic track. I’m glad it’s coming back to life. Rockingham is a great track. Hopefully this event will be big enough and will be broadcast enough that it will raise some attention and possibly be able to bring back the higher levels of NASCAR back to it.”

Riggs’ father, Scott Riggs, raced in the top divisions of NASCAR and competed in multiple events at Rockingham. He even scored at top-5 finish there in what is now called the NASCAR Xfinity Series. The younger Riggs says his dad offered some advice on how to best get around the track. 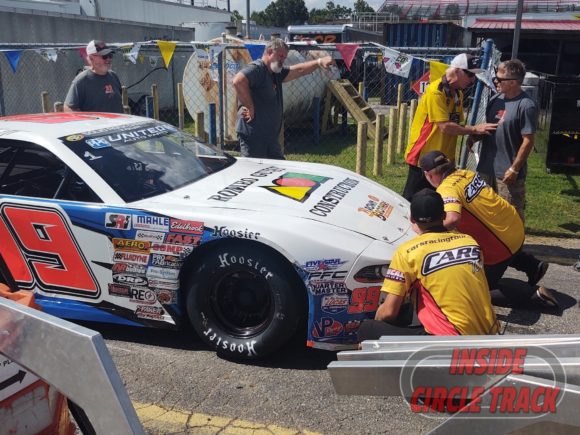 “He didn’t really give me a lot but he did say that you need to carry as much momentum as you can,” the son answered. “He told me to be careful more than enough times. He was more nervous going in than I was about it. The only thing he said was that the turn two wall comes up really quick. Besides that, he just said to conserve it. This is a tire test so we don’t have to set any world records so just be smart and get some good data.”

The current mechanical engineering student at UNC-Charlotte hopes to compete full-time again in the 2021 season on the CARS Late Model Stock Car Tour provided his coursework will allow for such. He very much would like to replace the memory of a stinging 1-point loss in last year’s final standings to Jared Fryar.

“It was disappointing as anybody could imagine it would be. We’re just trying to move on from it and do the best we can from here on out. I feel like I did the best I could last year after we had two DNF’s and still were able to compete for a championship. I feel like we were pretty consistent and ran well up in the top-5 all year. Hopefully we can work more in the off-season and be able to go out and be stronger and not even have to be in a battle for the championship because we’ll have enough points to win it by a landslide, but that’s how everybody wants to do it.”