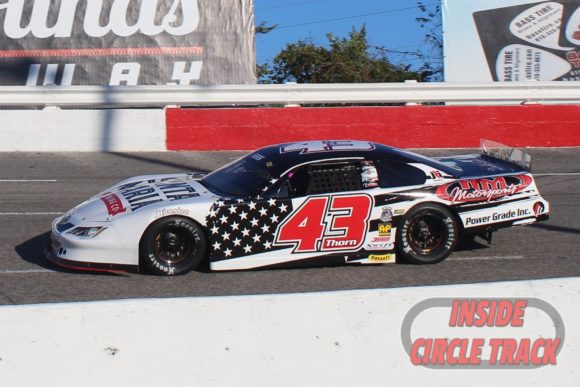 Qualifying for the 53rd annual Snowball Derby took to the track at Five Flags Speedway on Friday night. After 53 cars had posted times, it was Derek Thorn who came away with the coveted pole position for the main event to be held on Sunday afternoon at the half-mile Penscola, Fla. track. The Lakeport, CA driver will now be faced with the decision of whether or not to accept the ‘Back-to-Front Challenge’ which could potentially add $25,000 to his earnings should he win the race after starting from the tail of the field.

It was the second consecutive pole in the Snowball Derby for Thorn.

The top-30 from time-trials were locked into the starting lineup for the Snowball Derby with all others having to go to a 50-lap Last Chance Race to be held on Saturday that will admit another six starters to the grid or will have to rely on a provisional position.

Here are the top-30 qualifiers from Friday night:

Some of the drivers who were unable to lock themselves into the field were Augie Grill, Kodie Connor, Noah Gragson, Carson Hocevar, Bubba Pollard, Derek Griffith, Chase Elliott, Sammy Smith, and Chandler Smith.

Bubba Pollard and Jeremy Pate have provisionals and will not have to compete in the Last Chance Race.