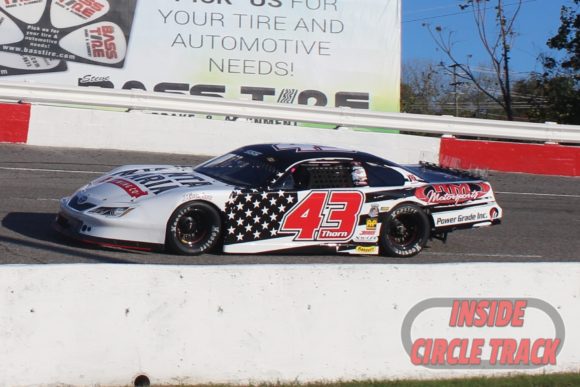 Derek Thorn started the 2019 Snowball Derby from the pole

The Snowball Derby is pavement short track racing’s biggest event for those who compete in the ranks of the Super Late Model machines. The winner will receive a first prize reward of $25,000, a year’s worth of bragging rights, and a lifetime of being introduced as a former winner of that race. But in 2020, crossing the finish line first and then surviving the post-race technical inspection process could become even more lucrative for one driver.

Qualifying for the Snowball Derby is one of the most stressful activities in all of racing. The top-30 drivers(out of no fewer than 52 entrants) from Friday night’s qualifying session will be locked into their positions on the starting grid for the big race. Those who do not make the field via qualifying will have to race their way into the 36-car starting lineup through a last chance race.

The fast qualifier will receive a bonus of $1,000 for earning the pole position for the main event but he will also have to make a very big decision before the green flag waves to start the 300-lap event on Sunday afternoon. James Finch’s Phoenix Construction is offering a bonus of $25,000 if the driver who is fastest in time-trials will agree to start the race from the rear of the field and then comes from the back to the front to win the race.

So not only will that one driver and team have to decide on such matters as race setup and pit strategy, but they will also have to decide on whether or not to take the fastest car among those who attempted qualifying and move it to the tail of the field prior to the start of this discipline’s biggest race.

Weighing the risk vs. reward could be gut wrenching. On one hand, that team will have the opportunity to start the sport’s biggest race from the most coveted position. But on the other hand, there is an offer on the table that would allow for that team to potentially double the amount of money available at the end of a season in which some races were either lost altogether or altered financially due to the coronavirus pandemic.

There is always drama involved at the Snowball Derby. Often times that drama reaches its height after the checkered flag has waved as was the case last year when apparent winner Stephen Nasse was disqualified following post-race inspection and Travis Braden was ultimately named the victor. This year, the drama will be heightened even more than normal in Pensacola on qualifying night.