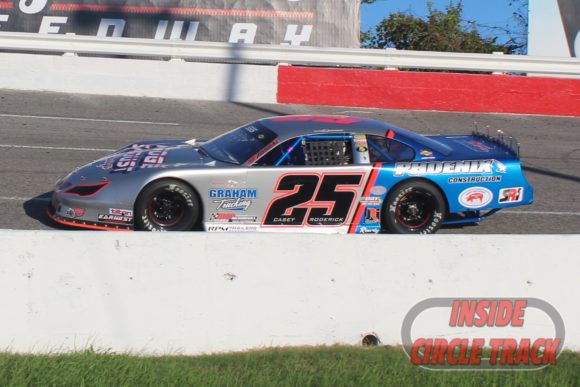 There were some who criticized Casey Roderick following last year’s All-American 400. The Lawrenceville, GA driver had raced the leaders hard all the way to the finish despite having been lapped earlier in the day. He contended after that race that he believed he had been wrongfully scored as a lap down and wanted to gain positions in hopes that a scoring might be found after the race. That never happened and the driver was ultimately credited with a seventh place finish in that race with scoring showing him two laps in arrears.

On Sunday evening, the 28-year-old driver found redemption as he drove to the win in the 2020 version of the All-American 400 at the Nashville Fairgrounds Speedway. His first win in one of pavement short track racing’s crown jewel events netted the driver a $15,000 payday.

Kodie Connor started the All-American 400 from the pole position after turning a lap of 18.432 seconds around the .596-mile paved oval. Also lining up for the start of the race in the top-10 were Carson Hocevar, Chandler Smith, Derek Thorn, Willie Allen, Bubba Pollard, Casey Roderick, Hunter Robbins, Jake Garcia and Brandon Oakley.

From the outset of the race it appeared as if Derek Thorn would be the driver to beat as he quickly assumed the lead and at times drove out to sizeable advantages in between caution periods. The No. 43 car was seemingly on cruise control as he pulled away from the field, leaving others to battle for positions behind him.

On lap 37 a red flag had to be displayed to the field when a multi-car accident blocked the front straightaway. Daniel Dye, Carson Kvapil, Boris Jurkovic and Albert Francis were among those to be eliminated due to damage received in the crash.

Hocevar, who had earlier in the season won the prestigious Winchester 400, emerged as an early contender to Thorn’s supremacy but was never able to keep pace for more than a few laps each time the green flag waved. Smith, who finished second in the 2019 version of this race, also ran within the top-5 throughout the first half of the event.

Drivers appeared content to log laps during the middle stages with Thorn continuing to show the way. However, the intensity began to pick up as the conclusion drew closer. Also, new contenders such as Stephen Nasse, Corey Heim, Sammy Smith and Donnie Wilson began to emerge.

Hocevar moved by Roderick on lap 180 to grab the second position, while further back, Heim climbed into the top-5 by passing Sammy Smith.

A lap 204 restart proved to be one of the pivotal moments of the race. Contact between Thorn and Hocevar as they ran side-by-side down the front straightaway resulted in Thorn being sent hard into the outside wall and Hocevar suffering significant front end damage. Both were eliminated from the event.

Heim got by Chandler Smith to assume the race lead when green flag action resumed on lap 209. By lap 230, it appeared as if the No. 78 machine might drive away from the pack while Sammy Smith slowed and pulled into the pits with mechanical issues.

However, Roderick’s car came to life and he tracked Heim down from several car lengths back. On lap 240, the No. 25 took the race lead just before a yellow flag waved on lap 241. Under that caution period, Heim pulled behind the pit wall and retired from the race with mechanical woes.

On lap 248, Nasse moved into third after running in mid-pack for most of the first half of the race. At the same time, Wilson also joined the fray to contend for the victory.

Chandler Smith took the lead away from Roderick on a late race restart but the No. 25 regained the top spot on the leaderboard with an outside pass on lap 275. From there, Roderick pulled away from the field and sailed under the checkered flag to earn the victory.