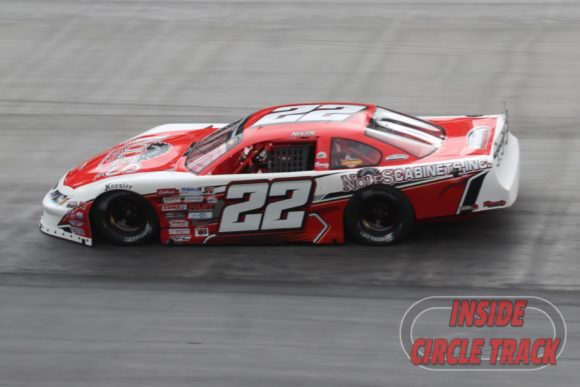 Drivers and teams poured into the Bristol Motor Speedway on Saturday for the 4th annual Pinty’s U.S. Short Track Nationals event co-sanctioned by the ARCA/CRA Super Series, the CARS Tour, and the Southern Super Series. Trevor Noles earned the win in the Super Late Model division by making a late-race charge to the lead then driving away from his challengers. The Donnie Wilson Racing driver earned a unique Gladiator sword-shaped trophy for his efforts at the historic venue.

A redraw placed Sammy Smith and Jake Garcia on the front row.

Due to concerns over tires, officials determined there would be a competition caution on lap 35 and no more than 40 consecutive green flag laps and caution laps would count over the first 75 circuits.

At the start of the 100-lap feature it was Garcia who went to the early lead ahead of Smith, Van Alst, Noles, Okrzesik and Nasse. The action slowed on lap 4 as a caution flag waved.

When the race went back to green flag conditions on lap 10, Noles moved around Van Alst for the runner-up spot. At the same time, the sixth-running Nasse began to fall back. Meanwhile, all drivers appeared to go into tire conservation mode as they ran in single-file formation awaiting the competition caution.

When the yellow flag waved on lap 35 Garcia maintained the lead ahead of Smith, Van Alst, Okrzesik and Heim. On the lap 40 restart the front row cars of Garcia and Smith appeared to touch which caused Smith to cut a tire and bring out another yellow flag.

At the halfway mark it appeared as if Garcia was in control of the race as he led over Van Alst, Logan Runyon and Corey Heim. Further back, Pro Late Model winner Brock looked to make himself a factor in this race as he moved by Coughlin to take fifth while Noles pushed Coughlin even further back in the running order.

At lap 60, however, the tire concerns of officials and competitors proved to be acurate as top-5 running Heim experienced a blowout that sent him hard into the outside retaining wall. Under that caution period officials allowed the cars to be brought down pit road so that crew members could gauge the wear of the tires on their cars. When the race returned to yellow flag conditions Garcia opted to give up the lead in favor of changing a suspicious looking tire.

Officials then decided that the counting of caution laps would continue until lap 90.

On the lap 64 restart, Noles bolted around Runyon to take second then went after the lead car of Van Alst before another apparent tire failure on the car of T.J. Duke brought out another caution. The two leaders exchanged the top spot on a couple of restarts until Noles finally asserted himself on lap 87 with a pass of Van Alst.

Last year’s winner Nasse regrouped from an early race pit stop and made his way into third on lap 90 and moved into challenge Van Alst for the runner-up position. But ultimately, Noles was up to the challenge as he sailed under the checkered flag then to victory lane to capture the Gladiator sword trophy.