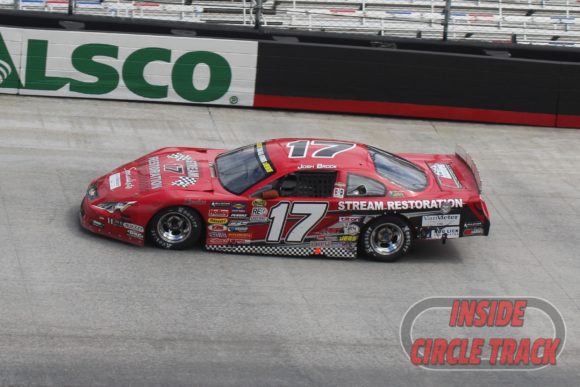 Josh Brock took the lead on a late restart

The 4th annual Pinty’s U.S. Short Track Nationals held on Saturday at Bristol Motor Speedway offered up racing in the Pro Late Model division as part of the action packed program. At the end of a full day of racing on the high-banked facility it was Josh Brock of Corbin, KY who took home the Gladiator sword-shaped trophy symbolic of a victory at ‘The Last Great Colosseum’.

Stephen Nasse was fastest in qualifying when he turned a lap in 14.900 seconds around the half-mile concrete oval. That time bettered the efforts of Cayden Lapcevich, Cody Coughlin, Cole Williams, Mason Keller, William Skaggs, Mandy Chick and Josh Brock.

The invert flipped those eight drivers on the starting grid for the PLM main event.

On the initial start of the 100-lap race second row starter Skaggs didn’t come up to speed and was turned into the outside wall with Terry Horak getting collected as well. Each of those cars received heavy damage in the incident. Coughlin also received minor damage in the mishap.

Once the race finally got underway, Brock shot to the early lead with Williams, Chick, Keller and Stroup trailing. Williams went on the move by lap 6 when he passed by Brock to take the lead of the race. Then the action came to a halt on lap 9 when Chase Burda made hard contact with the outside wall prompting officials to pace the field down pit road while the cleanup crew cleared the speedway of debris and fluids left from the Burda machine.

On the ensuing restart, two top contenders began to move forward as Nasse cracked the top-5 and Travis Braden, who was fast in practice then had trouble in qualifying, moved up to 7th.

Keller took the runner-up position away from Brock on lap 19 while Braden moved by Nasse for 5th one lap later. Things continued to decline for Nasse as he pulled off the track with mechanical issues on lap 30. However, Braden’s fortunes went in the opposite direction as he had risen to 3rd by lap 30 after having started dead last on the 16-car field.

Branden eventually went to second on lap 53 as he passed by Keller and then set off in pursuit of Williams. But by that time, Williams had pulled out to a significant lead over his newest challenger. Being held up by a slower car caused Williams to give up much of his advantage to Braden.

Contact between the lead car of Williams and the slower machine of Zachary Tinkle sent Tinkle for a spin and forced officials to wave the yellow flag on lap 63. Williams was sent to the tail of the field for the contact which lifted Braden to the race lead.

A full lap of side-by-side racing resulted in Keller leading lap 64 but Braden was able to assert himself as the front runner one lap later. Charlie Keeven took advantage and grabbed second away from Keller shortly afterward.

The young Keeven closed in on the defending Snowball Derby winner threatening to fight for the lead. However, Braden began to slip away from his pursuers while Keller moved back up to reassume the second position.

Keller moved in quickly on Braden then tapped the rear bumper of the No. 26 sending the race leader spinning into the inside wall on lap 81. The red flag was displayed to the field for safety crews to tend to Braden who fell to the pavement just after exiting his car.

Keller was sent to the tail of the field for his role in the incident.

On the lap 81 restart Dakota Stroup went briefly to the lead but Keevan wrested the top spot away on the next circuit. Williams, who worked his way back to the front following the earlier incident, came up to second. Williams then moved to the rear bumper of Keevan and looked to challenge.

Williams appeared poised to take the lead but spun as he moved to the inside of the No. 55.

On the following restart, Brock moved to second just before another yellow flag waved for an incident on lap 98 involving Keller and Stroup that took Keller out and sent Stroup to the tail.

On the final restart Brock got the advantage and held on to sail under the checkered flag.