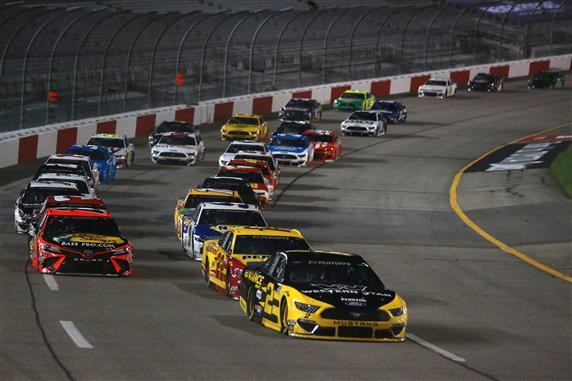 Brad Keselowski spent much of his time leading the pack in Richmond(Photo: Getty Images)

In 2018, three drivers were dubbed as the ‘Big 3’ by NASCAR Cup Series fans and media as Kevin Harvick, Kyle Busch, and Martin Truex Jr. dominated that season in terms of wins and placement within the standings. It was simply thought to be a matter of which one of those racers would claim the championship in the finale at Homestead-Miami Speedway at the end of the year.

As it turned out, however, neither of those three captured the title when Team Penske driver Joey Logano pulled off somewhat of a surprise by winning that final event and claiming the top prize in the NASCAR Cup Series.

In 2020, a similar scenario seemed to be playing out but with two drivers this time instead of three. Harvick and Denny Hamlin were unquestionably the dominant force in the Cup Series throughout the regular season as they each piled up race wins, stage wins, and enough playoff points to assure them a deep run into the playoffs. But just like in 2018, a Team Penske driver has suddenly emerged who looks like he could very well steal the thunder of the dominant regular season players.

Brad Keselowski turned in a overpowering performance back in August at the one-mile New Hampshire Motor Speedway when he led 184 laps of the Foxwoods Resort Casino 301 on his way to victory. And again this past Saturday night at the three-quarter mile Richmond Raceway the No. 2 Ford was clearly the car to beat as it showed the way for 192 laps in the Federated Auto Parts 400 as the 36-year-old driver earned his fourth victory of the 2020 season.

Those two races alone would not necessarily seem to be enough to make Keselowski the favorite to emerge from the NASCAR Playoffs as the eventual champion.

But a couple of major factors from those events must be taken into consideration before discounting two contests in a 36-race season to be too small of a sample size. The same Team Penske car used at New Hampshire and again in Richmond is also planned to race on the one-mile layout of the Phoenix Raceway in the championship-deciding race on November 8th.  Furthermore, Goodyear plans to bring a tire constructed of a similar compound as those used at NHMS and Richmond to the finale in Phoenix.

For his part, Keselowski was adamant in his Richmond post-race television interview with NBC Sports that he excited about the possibility of using that same No. 2 Team Penske ride at season’s end.

“This is, I think, my car from Loudon(NHMS) and I wanted to do a really cool burnout with it but I want this car for Phoenix,” Keselowski explained. “It’s two for two and I’m real pumped. I don’t want to look too far ahead. We’ve got to get there and the next round is going to be really difficult, but still, I’m really pumped about this performance and the way we’ve ran on short tracks. I felt like coming in here with this Western Star/Alliance Ford Mustang we would run well, but this thing was awesome.”

Based on the two races in which that car has raced, it appears as if that particular car and that particular tire match up very well together. But Keselowski, who has missed making the Championship 4 in each of the past two seasons, knows there is still work to be done.