New Hampshire looks to provide another Harvick vs. Hamlin showdown 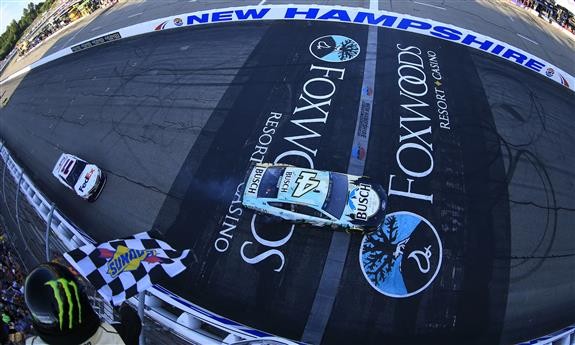 There is no doubt who the two most dominating figures of 2020 have been in the NASCAR Cup Series. Stewart-Haas Racing driver Kevin Harvick currently sits atop the series standings and has amassed a total of four wins throughout the coronavirus interrupted campaign. At the same time, Joe Gibbs Racing competitor Denny Hamlin ranks fourth in points and has piled up five victories so far. Out of 19 total races, these two are very near to taking 50% of the checkered flags having been offered at the sport’s top level.

Last Thursday’s Super Start Batteries 400 at the Kansas Speedway provides a microcosm of how the current season has played out. Although other drivers such as Kyle Busch, Brad Keselowski and Martin Truex Jr. had strong runs and led significant numbers of laps, the late stages of the race boiled down to a Harvick vs. Hamlin battle before Hamlin went on to win as Harvick faded to fourth in the final rundown.

Harvick’s Ford has crossed the finish line among the top-5 competitors 12 times during this season while Hamlin’s Toyota has placed within the top-5 on a total of 10 occasions.

Unfortunately for those who do not favor domination by a select few, this weekend’s Foxwoods Resorts Casino 301 at the New Hampshire Motor Speedway may not offer the variety you crave.

In the last NASCAR Cup Series race held at NHMS in July of 2019, it was Harvick who emerged as the victor following a late race battle with -you guessed it- Hamlin. As a matter of fact, these two racers lead the way among active drivers in wins on the one-mile track with Harvick having scored four first-place results and Hamlin adding three of his own.

And to further show that these two will almost certainly be in contention for top finishing positions on Sunday afternoon in New England, Hamlin has more runner-up finishes(5) at the ‘Magic Mile’ than any other driver while Harvick is tied with Matt Kenseth for the most top-5 career results(12) among those who are scheduled to participate this weekend.

Unless something drastically changes over the next few weeks, there is little reason to believe that Kevin Harvick and Denny Hamlin won’t enter the NASCAR Playoffs as the favorites to capture the 2020 NASCAR Cup Series championship. And based on the statistics from past races at New Hampshire Motor Speedway, there is little reason to believe that any sort of drastic change will begin to take place this weekend.