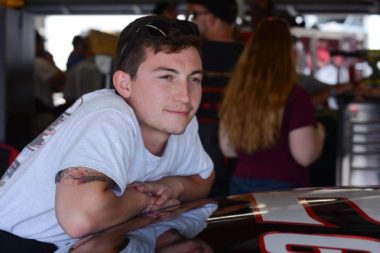 The 23-year-old racer won the World Series of Asphalt championship in the Super Late Model division by scoring one feature win and stringing together five podium finishes with no result worse than seventh in the seven contested events for that class.

But the race that perhaps garnered the most attention for the 2019 winner of the PASS 150 at the famed Oxford Plains Speedway was his performance in the ARCA Menards East Series race also held at New Smyrna in the midst of the World Series. Griffith qualified on the pole for that feature event then went on to lead 144 laps before crossing the finish line second just behind Sam Mayer.

It was Griffith’s first start on the ARCA Menards East Series and was the result of a chance meeting with car owner Chad Bryant and crew chief Paul Andrews at a banquet for the Kulwicki Driver Development Program, of which Griffith was a part in 2019.

“It’s a cool story really,” Griffith said in an interview with InsideCircleTrack.com. “The Kulwicki program kind of gets you out of your comfort zone and gets you a lot of exposure the way it makes you do stuff both on track and off track. They do a good job of getting everyone out of their eggshell and doing different stuff than what the normal racer would do so that’s always good.”

The rising star went on to tell of the meeting that secured him a ride in the ARCA East race.

“We went to the banquet this year and I got a chance to sit next to Chad Bryant and Paul Andrews, who was Alan Kulwicki’s crew chief when he won the Cup championship, and that was really neat,” Griffith explained. “And sure enough, it fell into a deal where we drove Chad Bryant’s car at New Smyrna Speedway while we were down there for SpeedWeeks. That all literally happened three days before the race so it was pretty cool to have something to attribute to the program and my racing career, specifically that ARCA deal.”

There are some significant differences in the construction of an ARCA car compared to Griffith’s more familiar Super Late Model. However, the racer enjoyed taking on the challenge of driving a different sort of machine.

“I’ve been running supers since around 2012 and the technology between the two cars, although you can’t say one is more advanced than the other, I mean the ARCA stuff is more advanced, but it’s just so different,” Griffith pointed out. “You go from a coil-over, bump-stop style car with a quick-change and trailing arms to one where there’s so much difference from that. The ARCA car has a truck-arm, non coil-over with all the weight higher than the super and the bodies are really high. They’re just so different.” 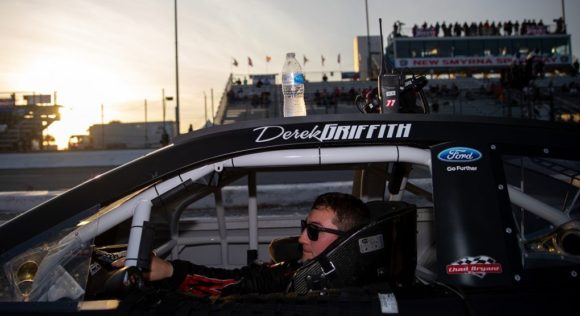 More than that, even the tires and the brakes between the two types of cars are unique to their own form of racing. As a result, Griffith explained that conservation was a key to success over the course of the 175-lap affair.

“You’re on a radial tire with the ARCA car versus a bias-ply in the super,” he said. “It’s a lot different driving style. People were burning the brakes off the cars in thirty laps. They said it was important to conserve brakes so you have to conserve your stuff. You want to roll and you want to be smooth. It was kind of weird because they were saying you’ve got to arc it out and you’ve really got to do certain things for this car to work.”

While there are significant differences in the construction and setups of the two types of cars, ultimately the driver found himself driving each in much the same way around the half-mile paved oval at New Smyrna.

“Ironically, I almost drove it identical to how I drove my super all week,” Griffith insisted. “I was surprised that it worked as well as it did. It was funny because in the first ten laps in the thing, it has a steering box, so when I would drive it in the corners I really had to turn it where we have a steering rack in our other car which turns differently. It was funny to drive it that way.”

Getting the opportunity to spend a day practicing behind the wheel of the Chad Bryant Racing Ford made a big difference on race day in the ARCA Series.

“I had practiced the ARCA car on Sunday then jumped in my super and ran in a super race then we ran the ARCA race the next day then we went back to the super the next day. I really got to feel the differences and how drastic they are. It was cool. It was a neat experience.”

Griffith hopes there can be even more opportunities to race in the ARCA Menards East Series, but as is always the case in racing, funding is a major part of that. The driver has been searching diligently to find the backing that could put him back in the Chad Bryant Racing ride for the upcoming Pensacola 200 at Five Flags Speedway on March 14th.

Alright everyone, we have a chance to run the #2 again at @FiveFlagsSpeed IF we get some sponsors on board with us. We also have the incredible option to run the full @ARCA_Racing East season with @ChadBryantRace. This will not be possible unless some people hop on board! pic.twitter.com/UEdqhG4sxY

When all was said and done, however, the driver who has been racing since a very early age declared the week at New Smyrna to be the best of his racing life…so far.

“I’d have to say so, for sure,” he said. “Maybe one day we’ll get to top something like that. Thinking about it now almost gets me emotional how crazy of a week it was. It took me days to understand how well we did and how much of a big moment this was for my team and for my career. If I ever get to move forward with this I can look back on this week and think about how good of a week we had. It was really cool.”