The World Series of Asphalt kicked off on Friday night at the New Smyrna Speedway in New Smyrna Beach, Florida with a 35-lap feature event for the Super Late Model division in the first of what is scheduled to be nine nights of racing action taking place on the track located within minutes of the Daytona International Speedway. At the end of the night it was Sammy Smith who came away with the victory after grabbing the lead on an early race restart then driving on to dominate the main event.

This is the first season in which the 15-year-old Smith has driven Super Late Models for Kyle Busch Motorsports.

The post-qualifying draw placed Griffith on the pole with Calles-McDonald on the outside of the front row. Smith, Sergi, Love, May, Grill, Moore, Noland and Garrett would round out the top-10 on the starting grid.

On the initial attempt to start the feature an accordion type mishap wound up with David Rogers backing hard into the outside wall just under the flag stand doing extensive damage to the No. 11 machine. The veteran racer who sat out much of the 2019 season while battling cancer was eliminated from the event after barely taking the green flag. That car had won the World Series of Asphalt championship at New Smyrna last year with Bubba Pollard behind the wheel.

When the racing action finally got underway it was Griffith who bolted to the early with Smith quickly moving up to assume the second position while Sergi jumped to the third spot with outside front row starter Calles-McDonald running fourth and May rounding out the top-5 during the initial laps of the race.

A lap 3 incident set off when Love made slight contact with Moore at the exit of turn 4 proved to have disastrous results for Moore as well as Trey Bayne(brother of former Daytona 500 winner Trevor Bayne) and two-time Snowball Derby champion Augie Grill. All three of those cars were eliminated  from the event with significant damage.

For Bayne, it was his first start driving for Jett Motorsports, a team that also fields cars for noted drivers Stephen Nasse and Jeff Choquette.

It was on the ensuing restart that Smith was able to assert himself at the front of the field. Lined up on the outside of the front row alongside Griffith when the green flag waved, the No. 51 machine won the drag race to turn one and was able to emerge onto the backstretch with the lead. From that point, the car owned by the defending NASCAR Cup Series champion maintained a relatively comfortable margin ahead of the pack. 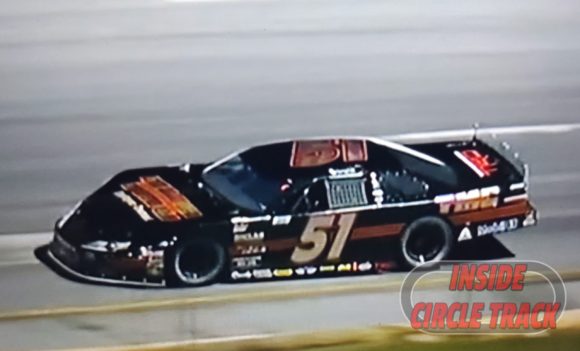 Sammy Smith took the lead early then drove to victory

In the meantime, there was plenty of action for positions further back in the field. Calles-McDonald and Sergi engaged in a battle for the third position which saw those two drivers trade the spot multiple times before Sergi established control.

Fast qualifier May then moved up to take fourth away from Calles-McDonald on the ninth circuit. All the while, Austin MacDonald and Noland fought side-by-side at the same time they too closed in on Calles-MacDonald in hopes of entering the top-5.

MacDonald, after breaking free from his battle with Noland, grabbed fifth away from Calles-McDonald on lap 16.

At the halfway point of the feature, Smith led Griffith, Sergi, May and MacDonald. The lead duo would hold station for the rest of the way while May was able to wrest third away from Sergi as the laps wound down.

But in the end, it was Sammy Smith who cruised under the checkered flag to claim victory.