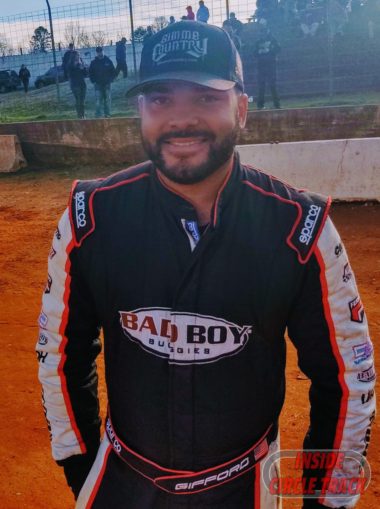 Ryan Gifford’s racing past goes all the way back into his childhood when he began competing in go-karts. But the native of Winchester, Tenn. really began to fall in love with the sport as a 15-year-old when he first steered a Dirt Late Model onto the track at Winchester Speedway. Since then, his life has very much revolved around the sport that he has not only grown to love but has made into his livelihood.

On Sunday afternoon the 30-year-old racer found himself in one of his favorite environments as he wheeled a Late Model around the Cherokee Speedway in Gaffney, SC as a participant in the Xtreme DIRTcar Winter Series feature race. Gifford, who now races on a part-time basis, would eventually finish that event in the 8th position at the end of the 40-lap distance.

While he may not get into the driver’s seat quite as often as he would like, Gifford never finds himself very far away from race cars. Monday through Friday he applies his knowledge and skills at the shop of one of NASCAR’s best known organizations.

“I haven’t been racing a bunch,” Gifford explained in an interview with InsideCircleTrack.com. “I kind of took a couple of years off there and basically started working a bit and getting myself established in my job at Richard Childress Racing. Royce McGee, who I work with over there, had this Late Model but he hadn’t been racing either so we decided to go race a little bit when we can. We both stay pretty busy with work. It’s fun to get back out here and see everybody and compete. Obviously, we’re still working and trying to get more competitive but we’re having a lot of fun.”

Gifford knows how to run up front in a dirt car. The driver who was once part of the RCR Development Program found victory lane multiple times in Dirt Late Model competition. Further, he has won on pavement as well when he took the checkered flag at Richmond Raceway in a K&N Pro Series East event back in 2013.

And he was able to experience success from the other side of the wall in 2019.

“I work in the shop so it could be one thing on one particular day and another thing the next,” Gifford said of his duties at RCR. “Last year I was on the Xfinity team with Tyler Reddick. We had a really good year and we won the championship. It’s a little bit of everything. People would be surprised at the amount of work it takes to race like that at that level. And I think people would be surprised at how few people there are.”

Both racing and working on dirt cars prepared Gifford well for his current job. For several years he toiled in the shops of Team Dillon Racing as he helped crew chief Shane McDowell prepare Dirt Late Models and Dirt Modifieds for brothers Austin and Ty Dillon.

“You’ve really got to be well rounded in that form of the sport too,” Gifford declared regarding NASCAR. “I think that doing this stuff for so may years helped me a lot. It’s fun and I enjoy it. I enjoy everything I get to do. This is all a blessing but I’m hoping this year we get to race a little more. Mother Nature hurt us more than anything last year.” 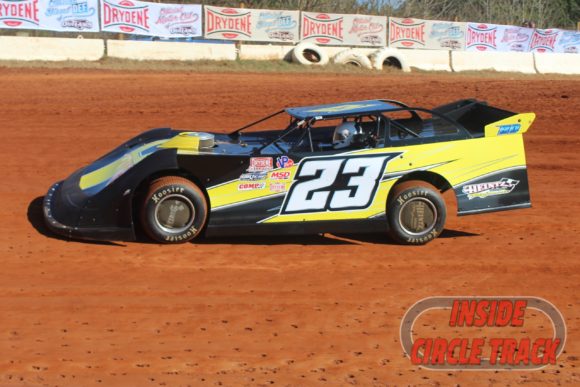 Ryan Gifford on the track at Cherokee Speedway

As far as his own racing goes, Gifford and the McGee team mostly stay close to home. They can typically be seen in the Carolinas at tracks such as Cherokee, 311 Motor Speedway and Lancaster Speedway when their duties in the NASCAR world allow for some time away from the shop.

“We just go wherever we can go,” he pointed out. “Sometimes we’re there at the RCR shop late on Fridays or we work on Saturday and can’t go race, but it’s all good. We understand where we’re at and what we’re trying to accomplish. At the end of the day, we just do it when we can make it and we have fun. If it’s a situation where we’ve got to scramble and rush to get to the race track, we just stay home.”

Aside from racing, Gifford has found another way to spend his free time. He often times ascends into the skies over the Carolinas after taking up flying in an ultralight craft. But no matter what he is doing, this always smiling racer enjoys life.

“When I took a break from racing I kind of got the itch to just be doing something,” he explained. “I was just staying at home all the time so I figured I needed to find a hobby. I got into flying and it’s a lot of fun. It’s different and everybody thinks I’m crazy but it’s fairly safe if you go by the rules. I’ve met a lot of good friends doing that. It’s a fun balance because some weekends I go off and fly and then other weekends I get to drive a race car. I’m pretty lucky.”