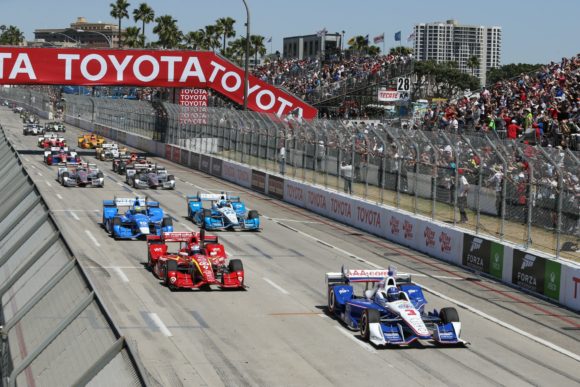 IndyCar has made use of street circuits. Is this a direction NASCAR should consider?

Over the past couple of weeks the topic of NASCAR taking its sport to street courses has been tossed about on social media and various other sites where racing is discussed. And my simple one word response to that is- Why?

Motives such as reaching new markets and racing in cool locales have been mentioned as reasons for the sudden desire to take NASCAR to the streets. However, little mention has been made of the racing that would actually take place on these makeshift courses potentially set to become new homes for a sport that has traditionally been contested on oval tracks with a few true road courses intermingled on its schedule.

As far as the idea of reaching new markets is concerned, hasn’t the sport been down this road before?

During the late 1990’s and the early 2000’s NASCAR literally took its show on the road to new venues in parts of the country that previously had not had very much exposure to this form of racing. Similar looking tacks located near major markets such as Las Vegas, Chicago and Kansas City were incorporated into the schedule guided by the idea that new markets could be reached for the purpose of expanding the sport’s fan base.

And for a brief time, there was a surge in attendance and television ratings. It looked as if NASCAR’s gamble had paid off as the leaders of the sport seemed to believe their own press clippings that many millions of fans were on the edge of their seats every weekend tuned in to their new favorite past-time. However, that boost began to give way as those new die-hards proved not to actually be die-hards at all.

And worse, not only was the new clientele slipping away but the sanctioning body’s longtime followers, feeling betrayed by the leadership of the sport they had dedicated an entire lifetime of fandom to, were beginning to also fall by the wayside. Television ratings were eroding and attendance at tracks that had been sold out for years was dropping off to the point that large empty spaces could be seen in grandstands across the country.

Did the sport learn nothing from its missteps of two decades ago that are still being felt today?

NASCAR President Steve Phelps stated publicly not long after he took the reins of power that the sport had lost its way in previous years. If NASCAR feels as if racing in cool locations is what the sport needs, it may still be looking to find its way.

Beer gardens, coffee shops, Uber rides to the venue, and shopping districts are all fine if those types of things are your cup of tea. But will those things make the racing better? And most importantly, if new fans are drawn in by those things, will they stick around beyond that one race?

And the question asked above is the central question. No matter what other aspects are brought up for debate, the heart of this sport is the on-track product. Making that on-track product better has to be the ultimate driving force. The opinion of this writer, first and foremost, is that the actual racing on bumpy, tight, right-angled street circuits is typically not very good when used by IndyCar and other forms of racing.

The overall vibe for NASCAR during 2019 was generally more positive than it has been in previous years. Furthermore, television ratings for the NASCAR Cup Series were showing improvement until the final two events of the season. Perhaps the total domination of Joe Gibbs Racing or competition from other sports or forms of entertainment played a role in that late drop off, but still, the outlook is more promising than it has been.

Television ratings wound up being basically flat from 2018 to 2019. While that might not sound like something to celebrate, when it is considered that the past several years had seen one record low in viewership surpassed by another record low the following season, a stoppage of the bleeding is noteworthy.

The old adage of “If it ain’t broke, don’t fix it” can now rightfully be replaced with “Now that it seems to be coming back together, don’t break it again”

The new aerodynamic package put in place by NASCAR at the start of the 2019 season seems to have helped improve the racing on the much maligned 1.5 and 2-mile tracks. Short tracks and road courses appear to have suffered as a result of those changes so some tweaking(which has been rumored) of the package for those circuits could return them to the competition levels fans and competitors have become accustomed to.

NASCAR has had enough drastic changes over the past couple of decades. The hope of this writer was that stability tempered with a few necessary tweaks would be the path the sport would follow for a while rather than its previous trend of pursing demographically desirable “fans” who have no intention of being caught by this sport.

While changes to the schedule appear to be coming in 2021, let’s not once again embark on experimentation simply for the sake of experimentation. NASCAR’s leadership needs to primarily keep its focus on the track, and yes, that includes keeping the cars on an actual race track.

In a recent poll I conducted on Twitter, my followers tended to agree that street circuits are not a direction NASCAR need to take.

Would you be in favor of #NASCAR racing on street circuits?