Martinsville Speedway currently holds the distinction of being the first track to host a race in the ‘Round of 8’ portion of the NASCAR Playoffs. That means that at the end of the day on Sunday followers of the Monster Energy NASCAR Cup Series could potentially know who one of the four drivers with a chance to be crowned as the 2019 champion will be. The winner of the First Data 500, provided that driver is one of the eight still remaining in the title hunt, will be issued an invitation as one of the Championship 4 contestants in the season finale at the Homestead-Miami Speedway on November 17th.

Entering this weekend on the paper-clip shaped half-mile located in southern Virginia, two drivers from the Joe Gibbs Racing stable hold what appears to be a distinct advantage over the other six title contenders. Kyle Busch and Denny Hamlin currently sit first and third in the MENCS standings as the series heads into this final trio of events leading up to the season ending Ford EcoBoost 400 in south Florida. 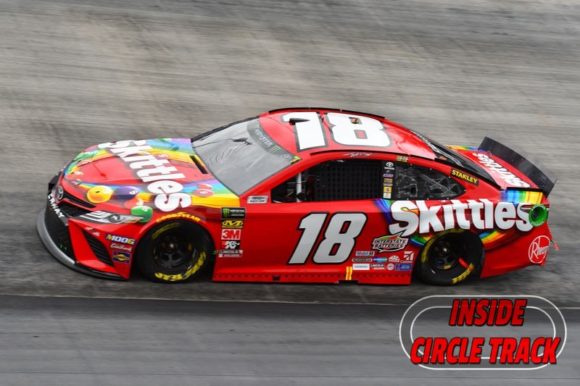 Busch has found his share of success at Martinsville over the course of his career. The driver of the No. 18 Toyota has scored two wins to go along with sixteen top-5 and seventeen top-10 results on the often difficult to handle short track. The Las Vegas native is currently in the midst of a streak that has seen him score eight consecutive top-5 finishes here with his two victories coming in in 2016 and 2017.

All of those numbers combined give Busch an impressive average finishing position of 12.0 in the 28 Cup races he has entered at Martinsville.

Unless some sort of mechanical trouble or an unforeseen incident befalls Busch, it would seem that he must be considered a favorite to emerge from Martinsville as a solid threat(if not a lock) to be in one of those four positions to earn a chance at the championship.

Perhaps the only driver among those in the final eight with a better track record than Busch at Martinsville is his JGR teammate Denny Hamlin. The home-state driver has steered his No. 11 Toyota into victory lane five times on this track which has provided him with quite a collection of grandfather clocks(given as a winner’s trophy) from this track. And more, the JGR racer has piled up fourteen top-5 and twenty top-10 results here over the course of his career.

One thing to consider, however, is that Hamlin has not won here since the spring of 2015 but he did finish as the runner-up in this race one year ago and was fifth here back in March. In his favor, though, is the fact that this team has been very hot of late scoring finishes of fifth, third and first in their last three races to assure advancement into this round.

Among all active drivers, only Jimmie Johnson(8.5) has a better average finishing position at this track than Hamlin’s 9.6. However, seven-time champion is not among those with a chance to win the title.

While Busch and Hamlin enter the race seemingly in very good positions, others have a steeper hill to climb at this track. Certainly getting off to a good start is something every driver and team would like to do in this round but some may not be able to do that if the statistics hold true. 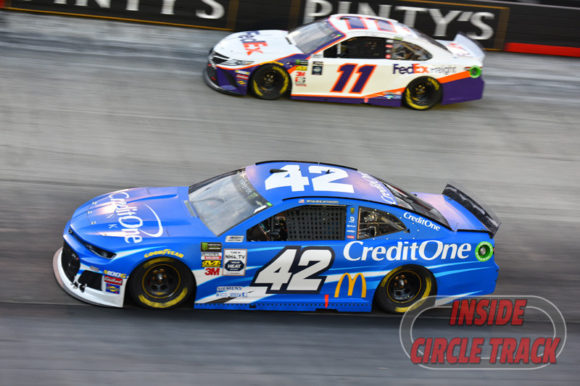 Kyle Larson enters this race seventh in the standings 35 points behind leader Busch and 19 markers behind fourth place Joey Logano. And unfortunately for the driver of the No. 42 car, this has been one of his worst tracks. The Chip Ganassi Racing pilot has only managed one top-5 and one top-10 here and holds an average finishing position of 23.6 on the paper-clip.

Of Larson’s 11 starts at Martinsville, four have ended with finishes of 30th or worse. His best finish in his last six starts here has been a 14th in 2016.

While Ryan Blaney currently ranks eighth in the standings 37 points behind Busch and 21 points separating him from the fourth place cut line, he has had better luck at Martinsville than Larson. In seven Cup starts at this facility he has earned two top-5 and three top-10 results.

Of the drivers within the top-4, Martin Truex Jr. has had the most difficulty at Martinsville with no wins and an average finishing position of 18th in his 27 starts. But recall that he was within one turn of winning this race last year.

Obviously, anything could happen this weekend. But going into the event at Martinsville the numbers seem to indicate that Kyle Busch and Denny Hamlin stand the best chances of setting themselves up for success here in the first race of the ‘Round of 8’.