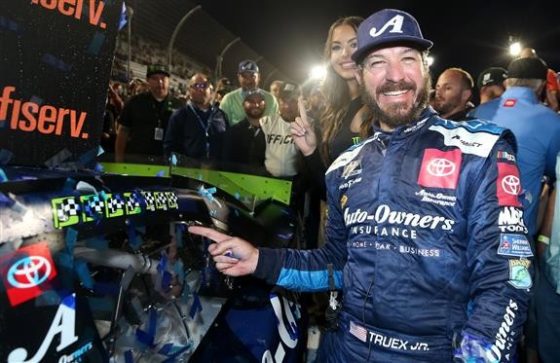 Here we are several days removed from the First Data 500 contested last Sunday at the Martinsville Speedway and despite being closer to the running of this weekend’s Monster Energy NASCAR Cup Series event at Texas Motor Speedway, the vast majority of talk, print, and television content revolving around the sport is still focused on the paper-clip shaped track located in southern Virginia. But unfortunately, not much of that talk is centered on the racing that took place the half-mile.

Instead, most who are discussing Sunday’s race are chattering about the altercation that occurred on pit road following the checkered flag between Joey Logano and Denny Hamlin that ultimately also involved a number of Team Penske and Joe Gibbs Racing crew members.

And for NASCAR, that’s a good thing.

Wait, it’s a good thing that people are talking about a post-race scuffle on pit road instead of the action on the track? Well, yes it absolutely is because the racing on the track quite simply was not very good, at least at the front of the pack.

While there may have been some bumper tag and side swiping further back in the field, the leader essentially went unchallenged virtually all day as Martin Truex, Jr. led a crushing total of 464 of the 500 laps in the event. After taking the lead just after the halfway point, the No. 19 JGR Toyota was at the top of the scoreboard for the remainder of the day.

In a piece written earlier this week for AutoWeek.com by Matt Weaver, it was pointed out that Truex’s astounding number of laps led combined with the 446 circuits paced by spring winner Brad Keselowski means that the two eventual Martinsville winners showed the way for more than 900 trips around the speedway in their respective triumphs.

According to Weaver, there have been only three green flag passes for the lead in the two races contested on a track typically known for its beating-and-banging style of short-track action. The writer stated his belief that the aero package being employed by NASCAR in 2019 has brought about this sudden run of seemingly complete and total domination by the lead cars in the Cup Series events held at Martinsville.

Further, the column points out that Martinsville does not appear to be the only track to have fallen victim to the aero-induced lack of passing. The ‘Monster Mile’ at Dover and the road courses in Sonoma and Watkins Glen have apparently suffered similar fates. 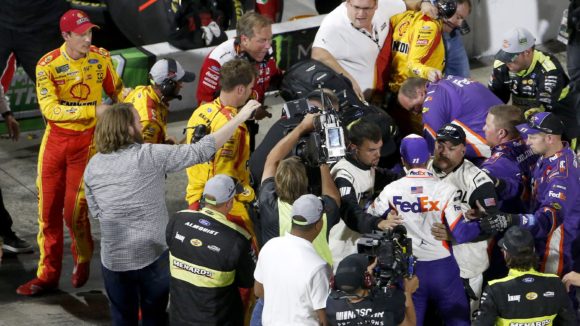 Joey Logano, Denny Hamlin and crew members mixed it up in Martinsville(Photo by Brian Lawdermilk/Getty Images)

So getting back to the original point, the scrap between drivers and crews served as a benefit to NASCAR in that pundits and fans would otherwise be talking about a race that featured one car leading essentially the entire way. Or worse, no one would be talking about the race at all.

A green flag pass for the lead occurred after Kyle Larson stayed out on old tires following a caution flag being displayed just prior to a stage break. The No. 42 team gambled that they could earn some stage points by holding off at least some of those who pitted for fresh rubber. Truex eventually moved around Larson but no one else could get by before the stage ended.

This week the focus has been on whether or not crew members should get involved in driver disagreements. If not for that, everyone would be talking about why no one can seem to get involved in passing the leader.