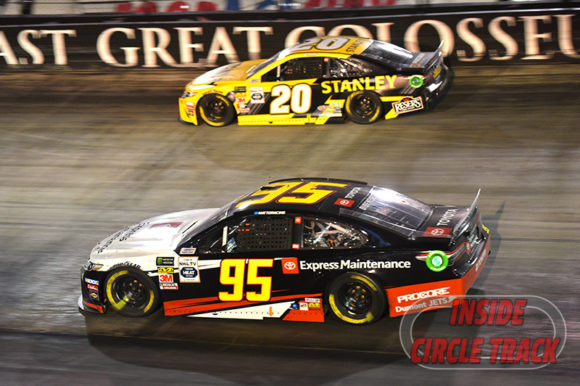 Matt DiBenedetto(95) took on the power teams at Bristol

If you haven’t heard the feel-good story of Matt DiBenedetto’s run this past Saturday night in the Bass Pro Shops/NRA Night Race at Bristol Motor Speedway you really need to think about getting out from under that rock you’ve been living under. As has been well documented, the soon-to-be-displaced driver of the Leavine Family Racing Toyota led 93 laps of that event and looked very much like a potential winner until he was eventually passed by Denny Hamlin with just 11 laps remaining.

That second place run proved to be a high water mark for the independent Levine team that only receives a limited amount of support from Toyota and powerful Joe Gibbs Racing. The idea that such an organization could come so close to beating out the most heavily funded operations on the Monster Energy NASCAR Cup Series produced an electric feeling among those in attendance as well as those watching on television and interacting on social media throughout the night.

And making the story of DiBenedetto’s effort at BMS all the more remarkable is that, as mentioned above, he had just been told earlier in the week that his option would not be picked up by LFR for the 2020 season. As a result, the 28-year-old Californian is looking for a ride with another team for the upcoming season.

It was a great story that came so very close to being one of the stories of the decade.

But there were more feel-good tales to be told during the NASCAR racing weekend in Bristol.

A look at the top-10 finishers in the NASCAR Xfinity Series Food City 300 held at BMS on Friday night reveals names such as Jeremy Clements, Gray Gaulding, Timmy Hill and Landon Cassill. That means teams such as Jeremy Clements Racing, Green Light Racing, a team owned by Carl Long, and JD Motorsports were competing among the likes of Richard Childress Racing, Team Penske and JR Motorsports. 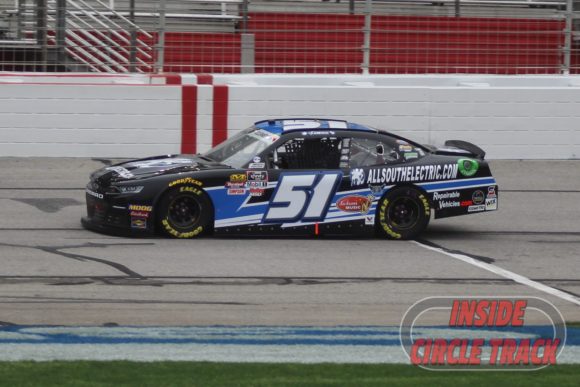 Jeremy Clements finished 4th in the Xfinity race at BMS

Clements scored his highest finish of the season by placing fourth and it was not a situation in which the No. 51 Chevrolet moved up the leader board because others fell out. The family-owned team that builds their own engines out of a garage in Spartanburg, SC that would hardly compare with those of Team Penske or JR Motorsports held its own throughout the night after posting a very impressive fifth place qualifying effort.

The stories are similar for the teams who employed Gaulding, Hill and Cassill.

The common denominator in the stories that came out of both nights in upper east Tennessee is that both the Bass Pro Shops/NRA Night race and the Food City 300 took place on a short track. Much unlike the so-called cookie cutter 1.5-mile and 2-mile tracks that so many NASCAR sanctioned races take place on, aerodynamics and engineering do not come as much into play. The half-mile tracks such as BMS offer drivers and teams an opportunity to even out the advantages typically enjoyed by the bigger and more heavily financed organizations.

Both short tracks and road courses seem to provide racing that is overwhelmingly dependent on aerodynamics and other advantages provided by engineering. Companies such as Team Penske, Joe Gibbs Racing, Hendrick Motorsports and Stewart-Haas Racing have bigger budgets than Leavine Family Racing or Jeremy Clements Racing and thus can afford an engineering staff which will help their cars get around places such as Charlotte Motor Speedway or Michigan International Speedway a few tenths quicker than those who cannot afford an engineering staff. And as anyone who follows racing knows, a few tenths can provide a huge advantage.

Driving ability, strategy, tire management and learning when and where to avoid trouble play a significant role in determining where drivers might finish on a short track or a road course. The advantages provided by greater engineering budgets can often times outweigh those abilities listed in the previous sentence on oval tracks of more than a mile in length.

Scheduling changes are coming to NASCAR in 2020 and the sanctioning body has indicated that perhaps even bigger adjustments are on the way in 2021. Many who enjoy seeing teams with smaller amounts of money to spend occasionally defeat the power teams are no doubt hoping for more short tracks since those are among the places more likely to provide the setting for such upsets to take place.