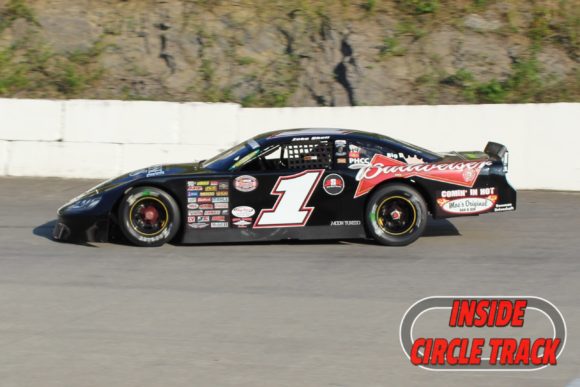 As part of Fan Appreciation Night the Kingsport Speedway offered a double helping of action in the Late Model Stock Car division. Nik Williams was the winner of the first feature of the night in a hotly contested opener. At the end of the second stanza it was defending Kingsport Speedway track champion Zeke Shell who left the upper east Tennessee track as the winner.

By NASCAR rule, whenever a track runs a double feature for a particular class the top-8 in the finishing order from the previous race must be inverted to form the starting grid for the second event. However, attrition from the night’s first event would play a role in setting the lineup for the second. Rick Pannell led the field to the green flag alongside Mardy Roberts with Jerry Broyles, Bryson Dennis, Wayne Hale, Derek Lane, Zeke Shell and Joey Trent(driving the damaged car Williams won the first feature with) filling in the first four rows.

Williams used a backup car and started the second feature from the tail.

At the start of the 35-lap feature it was Pannell who took the early lead followed by Hale, Dennis, Roberts, Lane and Shell. Hale wasted little time in moving forward as he took the lead of the race on the second circuit bringing Dennis, Lane and Shell with him as Pannell slid back in the running order.

Dennis took the lead on a lap 3 restart but his time at the front would be short-lived as the fast rising Shell moved to the top spot on the leaderboard on lap 5.

From that point the battle would be for positions other than the lead as Shell dominated the remainder of the event. Dennis and Hale ran multiple laps in side-by-side formation as they contested the runner-up spot before Hale finally grabbed the position on lap 14.

As Shell built a lead of almost a straightaway in length over Hale the trio of Dennis, Trent and Lane engaged in a tight battle for positions 3-5. Ultimately, Lane would emerge from that fight ahead of Dennis and Trent. But in the end no one would mount a serious threat to Shell’s leadership as the No. 1 machine cruised to victory.