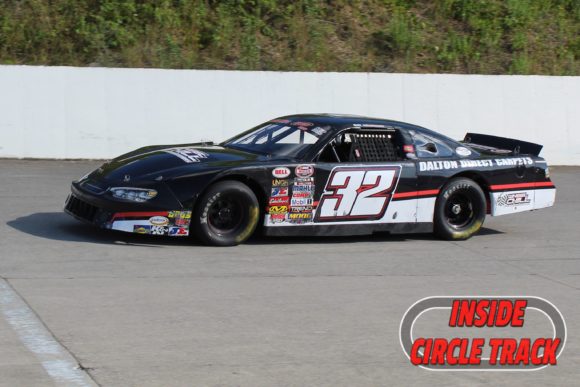 Nik Williams won the first LMSC feature of the night

Kingsport Speedway hosted its Fan Appreciation Night on Friday evening with racing in all its regular weekly classes as well as a fireworks show. The center piece of the racing evening was a pair of features in the Late Model Stock Car class. At the end of the first of those twin main events it was – who took the checkered flag to score the win.

At the start of the 35-lap feature it was Williams who took the early lead ahead of Shell, Trent, Dennis and Hale. Trent quickly took second from Shell and made a bid for the race lead on the second circuit. At the same time, Hale took fourth away from Dennis.

Williams maintained the early and began to pull as Trent, Shell, Hale and Lane ran in tight formation in positions 2-5 during the race’s first half.

A caution on lap 22 for a spin involving Mardy Roberts and Greg Bohanon set up some early fireworks.

On the ensuing restart Shell’s car tagged the Williams machine as the pack exited turn 2. Williams was sent spinning and the third running car of Trent was collected. Trent was eliminated with heavy damage while Williams continued in his battered car. Shell was parked by track officials for the remainder of the first feature.

Hale then inherited the lead with Lane, Dennis an Broyles trailing. However, the cars of Hale and Lane spun in turn four on the second attempt at a restart on lap 22. At that time, Dennis moved to the lead with Broyles and Rick Pannell just behind.

During the delay for the previous caution’s cleanup, Williams and his crew had removed the fenders and nose from his car and sent it back to the track without losing a lap.

On lap 24, the battered No. 32 machine made a bold move to get by Dennis and Broyles to retake the top spot. Dennis and Lane then spun as they fought for second.

After all that action, it was Williams who would pull away from the pack to score the victory ahead of a bitter battle between Hale and Lane for the runner-up spot.