A Weekend Worth Forgetting for Hendrick Motorsports 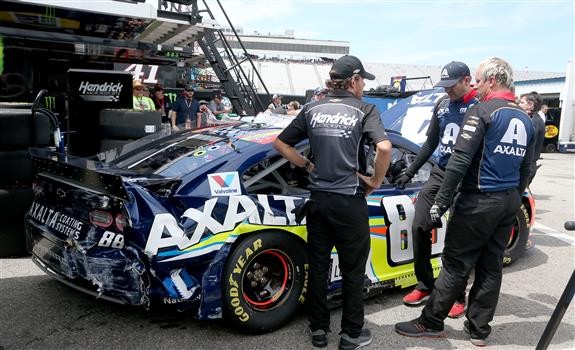 Members of Alex Bowman’s crew survey the damage after a crash in practice(Photo: Getty Images)

In the movie Men in Black the characters played by Tommy Lee Jones and Will Smith had a device they could click that would erase the memories of those it was directed toward. No doubt, the folks from one particular Monster Energy NASCAR Cup Series team would like to borrow that device.

Without question Hendrick Motorsports is one of the most successful organizations in the history of NASCAR. A visit to their campus located near Charlotte Motor Speedway will reveal scores of race winning cars, trophies and memorabilia dedicated to the race wins and championships collected by their drivers. However, this past weekend in the Foxwoods Resort Casino 301 at the New Hampshire Motor Speedway is one the company owned by Rick Hendrick would no doubt like to forget.

Of the team’s four drivers, none was able to come home with a top-10 finish as William Byron led the way for HMS by finishing 12th. Alex Bowman took 14th at the checkered flag with Chase Elliott(29th) and Jimmie Johnson(30th) barely in contention during the day.

But it wasn’t just poor finishes that made for so many headaches in the HMS camp.

Right from the beginning of the weekend things began to go awry as Bowman, who recently scored his first Monster Energy NASCAR Cup Series win in Chicago, endured a miserable couple of days leading up to the main event. During Friday’s qualifying session the No. 88 machine suffered a broken drive shaft which did irreparable damage to the underside of the car. That forced his crew to bring a backup Chevrolet out of the hauler and ready it for Sunday’s race.

But things went from bad to worse for Bowman. During a practice run on Saturday, the No. 88 spun and slammed the turn one wall of the one-mile facility damaging that car beyond repair. Ultimately, Bowman’s team had to unload the backup car from the No. 48(Johnson) hauler and use it during the race.

Considering all of the drama leading up to the race, a 14th place finish actually wasn’t so bad for Bowman. “We did what we could and didn’t need those late-race cautions,” Bowman commented on HendrickMotorsports.com after the race. “But we will move on to Pocono and be better there.”

Byron also had issues in the days prior to the start of the Foxwoods Resort Casino 301. Like his teammate, the youngest of the HMS pilots was forced to unload a backup car following a crash during practice. But also like his teammate, the driver of the No. 24 machine was able to salvage a decent finish.

“We never had super-great track position and it’s tough to pass,” Byron explained on the HMS website. “I felt like our last run was decent, so going on to Pocono I think we will have a good race.”

Both Elliott and Johnson made it to Sunday without significant trouble but both would be struck with bad luck during the main event.

Johnson lost power steering and had a water pump malfunction that sent him to the pits for lengthy repairs. “I thought it might have been from some contact on a restart,” the seven-time NASCAR champion said on his team’s website. “I got in the back of the car in front of me. They told me that wasn’t the case. So I assume some debris got in the pulley system and took out my power steering and the water pump as well. So it’s just unlucky on that front.”

Elliott’s No. 9 car also suffered mechanical trouble during the race and had to spend significant time on pit road while repairs took place.

The past couple of seasons have not been the brightest for Hendrick Motorsports. But thing had begun to look up coming into the weekend at New Hampshire Motor Speedway. But racing can be a cruel mistress and it showed that very clearly to this most successful of NASCAR organizations.