NASCAR made the right call in Chastain case 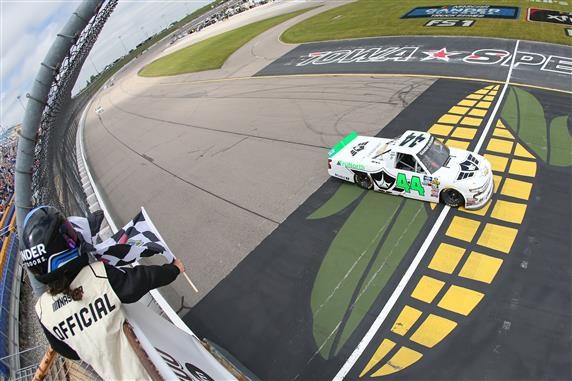 After making the decision to switch his points status from the NASCAR Xfinity Series to the Gander Outdoors Truck Series just a week before, Ross Chastain looked as if his gamble had paid off in a major way on Sunday at the Iowa Speedway. The Florida driver wheeled his Niece Motorsports Chevrolet truck into victory lane after taking the checkered flag as the apparent winner of the M&M’s 200 presented by Casey’s General Stores.

As a result of that win, Chastain was all but assured of making the NGOTS Playoffs. It proved to be a very well received situation as fans as well as industry insiders took to social media to praise the efforts of the popular driver.

It looked to be one of the top feel-good stories of the season in all of NASCAR as the driver who had gambled with a team that is not considered to be among the power organizations in the sport had just pulled off a miraculous victory and put themselves in contention for a championship run.

But the fairy tale came crashing down shortly after the victory lane celebration ended. Chastain’s No. 44 truck proved to be outside of NASCAR regulations in regard to the vehicle’s ride height. Specifically, the truck was found to be too low in the front end. As a result, the first place finish was negated and an automatic invitation (provided he could get into the top-20 in the series points standings by the time of the cutoff) was taken away.

Leading into the 2019 season NASCAR announced a major policy change for race cars found to be out of line with the rules. Instead of issuing fines and point deductions, as had been the case for numerous years, the sanctioning body stated that drivers whose cars were found to be illegal would be completely disqualified. There had been no such penalty enacted this season in the sport’s top-three divisions until Sunday afternoon.

The change in policy came about after fans and media alike had clamored for harsher punishments after a number of instances in which drivers and teams had been allowed to keep wins despite having cars that were found to be at odds with the rule book.

In the hours following NASCAR’s ruling, some have asked for leniency for the Niece Motorsports team and driver. Many of these pleas have used ‘wear and tear’ or ‘settling of the shocks and springs’ as reasons for officials to remove the harsh penalty and allow the likable Chastain to keep his win and his possibility of playoff eligibility.

Certainly, the team has the ability to appeal the ruling and is in fact doing so. That appeal will be heard on Wednesday.

But aside from compelling and legitimate evidence being provided for the truck being too low, the ruling must stand. The fact that Chastain’s win was a popular one and provided a feel-good story are not reason enough to overturn policy.

A good question to ask in this case would be something to the effect of – If this were Kyle Busch or Kevin Harvick, would the ruling then be okay? It can’t work like that. If Busch or Harvick or Truex or any other driver be found guilty of an infraction and have a win taken away, it must apply to all.

If Chastain’s truck was too low, then it was too low. That’s all that matters. This is not a matter of opinion. Making exceptions for this reason or that reason opens the door for further arguments and accusations of favoritism.

This website has advocated in the past for wins to be taken away from violators and that mindset has not changed. Teams are well aware of the rules and well aware of the penalties. They also know that there will be a stringent post-race inspection and that their machines must meet certain standards. ‘Parts failures’, ‘wear and tear’, ‘settling’, ‘it was only a small amount’, or ‘NASCAR has too many rules’ can not be used as reasons to avoid punishment.

Further, the truck had not suffered significant damage from an accident that would have resulted in a lowering of the front end so that explanation cannot be used either.

NASCAR has clearly stated its ride height rules for the NGOTS and the teams are aware that those regulations must be met following the race just as they must be met before the race. It is the responsibility of the teams to make sure their cars and/or trucks are legal.

It may not have been the popular call, but it was the right call. NASCAR got this one right.