Skip to content
Home NASCAR Blogs NASCAR race in Las Vegas was a case of sensation vs. perception

NASCAR race in Las Vegas was a case of sensation vs. perception 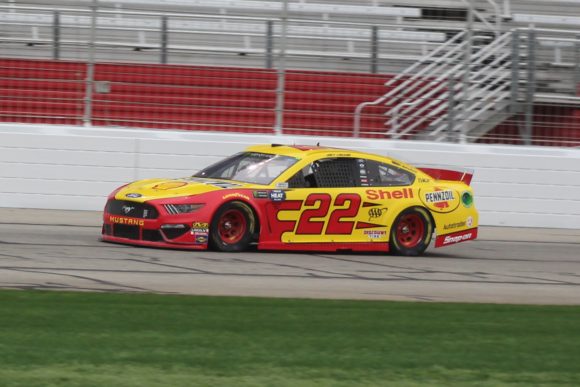 One of the few non-sports television shows in recent years that I have enjoyed was hosted by one of my favorite authors. The History Channel production titled Brad Meltzer: Decoded began with the best selling mystery and suspense writer asking, “What if I told you … “.

Well, what if I told you at the beginning of a Monster Energy NASCAR Cup Series race that there would be 19 lead changes among nine different drivers with no cautions other than the two scheduled stage breaks and the margin of victory would be just over one car length? Most people would likely hear those race facts and proclaim the event in question that they are about to witness would almost certainly be a good one. However, social media reaction following Sunday’s Pennzoil 400 at the Las Vegas Motor Speedway, which produced those exact numbers, proved to be less than enthusiastic.

For the sake of comparison, the race held one year ago on this same track featured 11 lead changes among six drivers with two caution flags not related to stage breaks. One driver, Kevin Harvick, totally dominated that event by leading 214 of 267 laps on his way to the win. The No. 4 car’s margin of victory was just under three seconds over second place finisher Kyle Busch.

The Psychology class I teach at Seymour High School is currently studying the chapter titled ‘Sensation and Perception’. A sensation, of course, is any piece of information taken in by the senses. Seeing, hearing, touching, tasting, and smelling provide the sensations most of us experience many times throughout each day.

Perceptions, on the other hand, are the meanings we attach to that sensory information once it has been taken in and deciphered by the brain. Past experiences, moods, attitudes, and expectations are among the factors that can influence the perceptions we make every minute of every day. 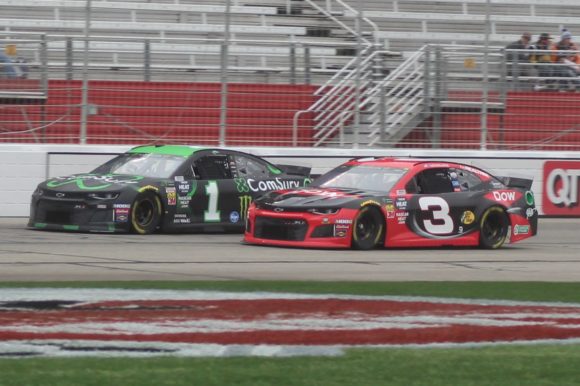 All that said, the perceptions generated among fans during and following the race in Las Vegas were no doubt influenced by their attitudes and expectations going into the event. And it doesn’t take a degree in Psychology to know that when expectations going into any type of activity are high, the possibility for disappointment is greater.

That might very well have been the case on Sunday as expectations ran high among all who follow NASCAR racing as the sport was set to fully unveil a set of engine and aerodynamic changes that were viewed as a means for creating pack-style racing on the tracks measuring over one mile in distance. Those speedways have frequently been on the receiving end of criticism from fans who point to a lack of passing and side-by-side action as reasons for their scorn.

So even with the lead changes and other factors listed above, there were seemingly many who were left unsatisfied with the race. Of course, it has to be considered that those who were satisfied were probably less likely to go on social media to express an opinion than those who were unhappy.

NASCAR reporter Jeff Gluck of JeffGluck.com(@JeffGluck on Twitter) runs a weekly poll asking “Was it a good race?” With still several hours remaining in the poll, Yes had received 56% while No had accumulated 44%. That is a closer margin than is often the case with Yes many times winning the vote. However, last year’s March race in Las Vegas was one-sided in favor of the No vote.

Again, it would seem, given the statistics previously mentioned, that Sunday’s race would be polling better if not for the high expectations.

The problem, in all likelihood, was that people had their expectations set too high going into the race. Considering all the buildup done by NASCAR, the media, and the competitors beginning all the way back at the 2018 All-Star Race at Charlotte when the package was first unveiled, it would have been difficult for any race to live up to the expectations that were held by many. 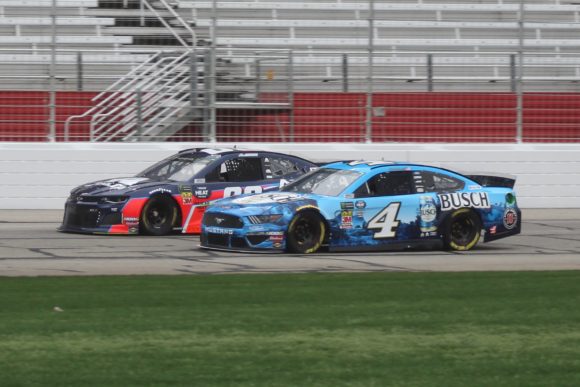 Fans want to see more of this type of action

While there was a good bit of mixing it up further back in the pack, especially on the initial start and following the two restarts, many were no doubt thinking that such action would take place over the full 400 miles in much the same way that it does at Daytona International Speedway and Talladega Super Speedway. And that just did not happen.

Everyone who watched the Pennzoil 400 had the same sensory experience. However, the perceptions made from what was taken in by the senses proved for some to be a bit disappointing. As is always the case, attitudes and expectations played a major role in that. Perhaps over time as everyone has more opportunities to evaluate and reconfigure their expectations, the perceptions of those taking in the racing sensations may change.