Skip to content
Home NASCAR Blogs Will “The Big One” Become Even More Commonplace in 2019?

Will “The Big One” Become Even More Commonplace in 2019? 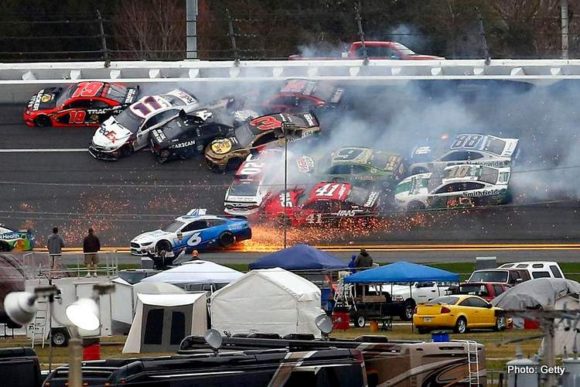 The Clash at Daytona featured a huge wreck

For years the term “The Big One” has been associated with the two high speed tracks on the Monster Energy NASCAR Cup Series. Daytona International Speedway and Talladega Super Speedway frequently see at least one and sometimes multiple crashes in which numerous cars are involved during the running of their events. Because of the use of restrictor plates at those two venues, cars tend to run in large, tightly grouped packs in which one small mistake can lead to catastrophe for as many as 15-20 drivers at a time.

Indeed, the recently run Advance Auto Parts Clash special event race at Daytona featured one such incident when eventual winner Jimmie Johnson moved low to pass leader Paul Menard and the resulting contact between those two machines sent Menard spinning and left the rest of the pack with nowhere to go. These type of wrecks have come to be expected on the two restrictor plate tracks.

But will there be even more of these sheet metal grinding crashes during the course of the 2019 season?

Starting this season, NASCAR will mandate that cars use a tapered spacer to reduce engine horsepower to approximately 550hp on tracks measuring more than one mile in distance. Further, aero ducts and larger rear spoilers will be required on the cars for most of the races on the schedule with the hope of creating tighter racing throughout the field. Following the Daytona 500, which will be contested using restrictor plate rules similar to those that have been employed by NASCAR since 1987, the remaining three events at Daytona and Talladega will call for the new tapered spacer and aero duct package without the plates.

Races held at Atlanta, Pocono, Darlington and Homestead will use the tapered spacer but not the aero ducts.

All that said, one has to wonder if the changes meant to create pack racing on the 1.5 – 2 mile tracks somewhat similar to that of the bigger speedways will result in more of the big crashes that have commonly occurred at Daytona and Talladega. The rules to be used at most tracks in 2019 were initially put to the test in the 2018 All-Star race held in May at the Charlotte Motor Speedway. NASCAR opted not to put the new rules package into play until the 2019 season but cited the fact that the special event featured 38 green flag passes for the lead compared to no such action in the previous running of that race.

The All-Star race saw multiple accidents, one of which was a Talladega style “Big One” that took out numerous star drivers.

While it would seem unlikely that cars would stay formed up in large packs of twenty or thirty for long periods of time on the 1.5-mile tracks as they do at Daytona and Talladega, there will be close racing in the initial laps following restarts until the tires begin to wear and cause separation among the cars. As a result, there will almost certainly be more incidents like the one seen last year in Charlotte.

It will be up to the drivers to adapt to the new rules if they do not wish to have their teams loading up destroyed race cars every week.

Much remains to be seen going into the 2019 season. Will this new package create more pack type racing on the so-called “cookie cutter” tracks? Will using the new aero and engine rules improve or detract from the events at Daytona and Talladega once they go into effect? Will these rules help all teams or will they provide even greater advantages for those with the largest engineering budgets? And, will “The Big One” become even more commonplace?

Only time will tell those tales. But with television ratings and grandstand attendance declining over the past decade, NASCAR had to do something different.