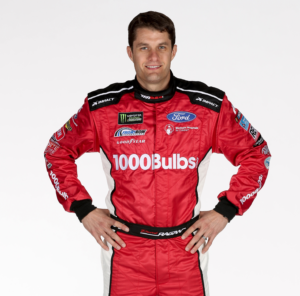 When the green flag waves to start the 1000Bulbs.com 500 Monster Energy NASCAR Cup Series race at Talladega Super Speedway on Sunday afternoon it is very likely that Front Row Motorsports driver David Ragan will be among those in contention to end the day with a good finish. The Unadilla, Georgia native has proven himself to be very proficient on the massive eastern Alabama facility along with its sister track in Daytona Beach, Florida. Those two tracks, because of their size and configurations, require teams to fit the engines of their racing machines with power-robbing restrictor plates.

The 32-year-old racer believes that the big restrictor plate tracks, which cause drivers to race in tight packs because of the drafting techniques employed throughout the day, serve to take away the advantages held by teams with big engineering budgets on other track layouts.

“Daytona and Talladega are big equalizers,” Ragan explained in an interview with InsideCircleTrack.com. “There’s going to be a difference between the guy who qualifies on the pole and the guy who qualifies 25th, but I think that if you’re within three-quarters of a second or maybe even one second you’ve got a fast enough car to draft and contend because the draft is the big equalizer.”

According to the driver who has won Cup Series races at both Talladega and Daytona, that equalization makes for a more intriguing race with more competitors in contention to run up front.

“That makes it exciting because you see some fresh faces up there sometimes,” Ragan pointed out. “But it makes it challenging because instead of six or eight guys capable of winning the race, you’ve got 25 guys who can win. But knowing that, we feel like we put a little extra effort in our race cars at Talladega. Front Row Motorsports has run well there over the years and I’ve been fortunate enough to drive Ford engines with Doug Yates(Roush Yates Engines) horsepower and that certainly helps. When all of those things come together, we know we’ve got a chance if we don’t make mistakes, if we have a little bit of luck, and if we execute well on Sunday.”

Ragan scored a win at Talladega in 2013 while driving for Front Row Motorsports. In all, he has compiled four top-5 finishes and 10 top-10 results on the 2.66-mile high-banked monster. He also has one win and five top-10’s at Daytona International Speedway.

The second generation racer believes that his team’s mindset going into a race that many dread is critical. Talladega is known for producing massive crashes with so many cars involved that such incidents are dubbed ‘The Big One’ when they occur.

“I feel like if you look forward to the worst that can happen you’ve already been beat,” he declared. “It’s important for your team to have a good attitude because you’ve got to go through tech, you’ve got to get through practice, and get everything you can from qualifying. Those are all big parts of the weekend. The weekend doesn’t start when you take the green flag for the race, it starts when you unload on Friday afternoon so it’s important for the team. I feel like I’ve got to be a leader and to have a good attitude going in.”

While Ragan wouldn’t want to race on the big plate tracks on a weekly basis, he does enjoy the variety the two venues provide when they come up on the NASCAR schedule. And he likes the fact that drivers play a major role in the outcome of the races at those facilities.

“I enjoy going to places like Daytona and Talladega,” he insisted. “I don’t know that I would enjoy going there 36 times a year, but it’s a lot of fun. It’s a different mix of racing. When you go to some of the other race tracks it’s about tire wear and getting your car to handle just right. Daytona and Talladega are more about watching what everybody else does and trying to make good decisions and having a little bit of luck. I feel like the drivers do make a difference at those places.”

The driver from a racing family recognizes the risk involved at Talladega but he also appreciates the role the track has played in the sport’s past.

“I know there’s a high risk of being involved in an accident maybe that was your fault or maybe that was someone else’s fault,” Ragan said. “And when you wreck at Talladega, you generally do wreck big and you wreck hard. But I think that if you make good decisions throughout the race you can make some of the right moves to avoid those accidents so I do enjoy going to those places as it’s a nice change of pace for the Cup Series. I also like the history, you know, the 212 by Bill Elliott back in the 1980’s and the caution free race that Mark Martin won are some of the neat things that have happened over the last thirty or forty years. I enjoy going to a race track that has a lot of history to it.” 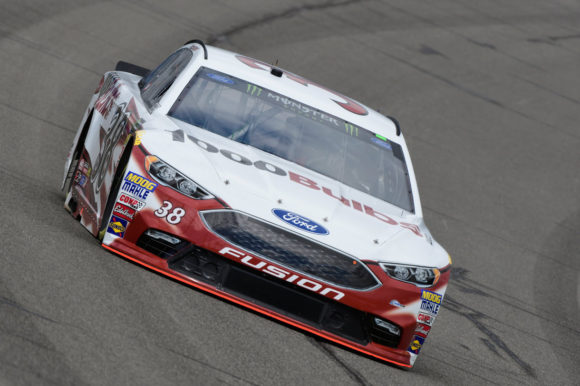 The No. 38 Front Row Motorsports Ford will carry the logo of event sponsor 1000Bulbs.com. With every intention of making a good showing for their backer, the team is completing its preparations in earnest.

“There’s a lot of talk, obviously, in the week leading up to it,” Ragan pointed out. “I watch a lot of video just to try to get my mind in the right mindset for restrictor plate racing. I look over some notes over the last couple of years. My crew chief and engineer do a great job as we have a real sophisticated notebook system where it’s all online and we can go pull up all the information from the last couple of races there so I’ll definitely do that. Sometimes on the plane ride home on Sunday night, depending on how well we ran or what’s on my mind from the previous race, I’ll start going over that to get in the right mindset.”

But even with all the preparations being made, the plans laid out tend to go astray once the green flag waves.

“It is hard to stick with a strategy,” Ragan admitted. “And I don’t know that I really have a set strategy of who to work with and exactly what to do because it’s fluid. It’s changing throughout the race depending on cautions, how fast your car is, where’s everybody else at, tire wear, weather, I mean there’s a lot of things that go into that so you just have to be knowledgeable of a lot of different situations and scenarios and how they’re going to play out.”

In the end, it all comes down to the team’s ability to adapt over the course of 500 miles.

“That’s where you and your crew chief just have to make up calls along with your spotter on how aggressive to be. You can see some trends over the years but nothing is a guarantee other than the end of stage one, the end of stage two, and how long the race is. I think you look at a lot of different scenarios and try to be as well versed as you can when it comes to making that decision so hopefully you can make the right one.”