To say the least, the first race in the first round of the NASCAR Playoffs were disastrous for some. A total of seven of the 16 drivers who qualified for the championship stretch run finished outside the top-20 in the final rundown of the South Point 400 Monster Energy NASCAR Cup Series race at the Las Vegas Motor Speedway. But of those to have bad days, three of them in particular suffered through their own personal versions of hard knocks as Kevin Harvick, Erik Jones and Chase Elliott were involved in hard crashes that ended their respective days prematurely.

On lap 149 the cars of Harvick and Jones were badly damaged when Harvick’s No. 4 Ford blew a right front tire and slammed into the turn one wall. Jones was left with no where to go which resulted in his No. 20 Toyota banging into the rear of Harvick’s car. Both were eliminated from competition and were listed as the 39th(Harvick) and 40th(Jones) place finishers in the event. 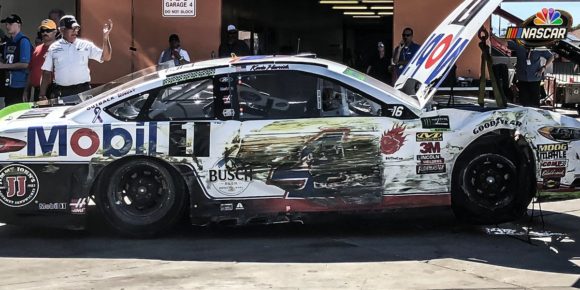 Harvick’s remarks following the incident were particularly strong and pointed directly at Goodyear. “There was something wrong from the time we put the tires on,” the 2014 Cup Series champion told NBCSN following the wreck. “It’s like Russian Roulette every time you put these piece-of-crap tires on and try to drive around the race track. One time it’s tight, one time it’s loose, one time they’re blistered. You know, we had a great car then you put a set of tires on and you can’t hardly make it through the field.”

Harvick, who has won seven events so far in 2018, had led 14 laps up to that point and appeared primed for another strong finish. The Stewart-Haas Racing driver currently sits fourth in the playoff standings due to the playoff points he had amassed coming into Sunday’s race.

Jones, who started the Vegas race from the pole, remains hopeful that his Joe Gibbs Racing team can recover and advance to the next round of the playoffs.  He took to Twitter after the mishap to express that belief, “Not the way we wanted to start but we’ve got the team and the determination to do it. We’re going to be fine. We can only control our race.”

Jones now ranks 15th in the playoff standings which leaves the No. 20 team with work to do if they hope to recover and advance to the Round of 12 in the playoffs.

Elliott ran within the top-10 most of the day but that came to an end on lap 213 when Jamie McMurray cut a tire going into turn three and spun. Elliott’s No. 9 Hendrick Motorsports Chevrolet could not avoid the McMurray car and made hard contact. The result was a 36th place finish which placed him outside the cutoff line in the 14th position of the standings with two races remaining in the first round.

Elliott talked to NBCSN after exiting the track’s care center with a possible shoulder injury. “Yeah, I guess it just got caught in the wheel and it popped really big,” he said. “And then I got stopped and I got messing with it and it popped really big again. But it’s all good now and we’ll try to rebound next week. We had a really good car today.

“Yeah, almost,” Elliott added as he watched the replay of his accident. “I just barely clipped him.” 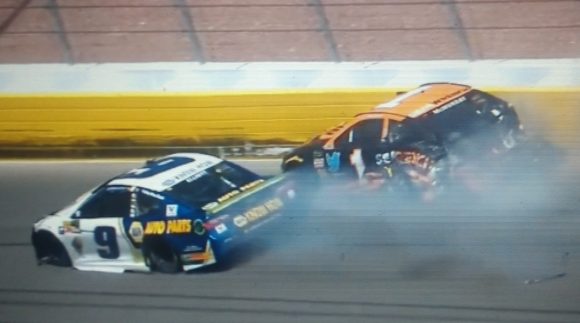