Skip to content
Home NASCAR Blogs Can Brad Keselowski steal the Cup title from the Big-Three?

Can Brad Keselowski steal the Cup title from the Big-Three? 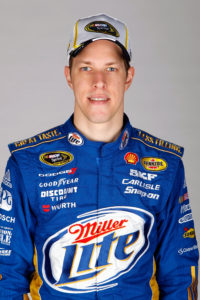 Some may call it luck. Some may say that it is a situation in which preparation has met with opportunity. Some may simply call it mojo. But whatever terminology you may choose to use, Brad Keselowski has found it in a major way. And more importantly for the Michigan native, he and his Penske Racing team have found it at just the right time of the season.

Keselowski has won back-to-back Monster Energy NASCAR Cup Series races. And these weren’t just any old races that the No. 2 Ford claimed, but rather, they were crown jewels of the sport.

On Labor Day weekend the winner of 26 career Cup events rallied late to score a victory in the highly coveted Bojangles Southern 500 at the historic Darlington Raceway. The win was the first of the 2018 season for Keselowski as he and every other driver in NASCAR has had few opportunities to visit victory lane considering the dominance demonstrated throughout the year by Kyle Busch, Kevin Harvick, and Martin Truex, Jr. as the so-called Big-Three have grabbed a total 17 checkered flags in the 26 races contested so far.

The Roger Penske-owned operation followed their triumph on the track that claims to be “Too Tough to Tame” with a win in the rain delayed Big Machine Vodka 400 at the Brickyard on the famed Indianapolis Motor Speedway.

Significantly, Keselowski and his Paul Wolfe-led team have earned their two victories precisely as the MENCS prepares for its playoff stretch run of ten races that will ultimately determine the series championship.

Neither of those previously mentioned wins came in dominating fashion. The No. 2 car led only 24 of 367 laps at Darlington then paced the field for just nine of 160 circuits in Indianapolis. But rather than demonstrating that the team may not have quite reached the level of the Big-Three, these recent performances show that Keselowski, Wolfe, and the crew are firing on all cylinders in terms of race strategy and execution at just the right time. 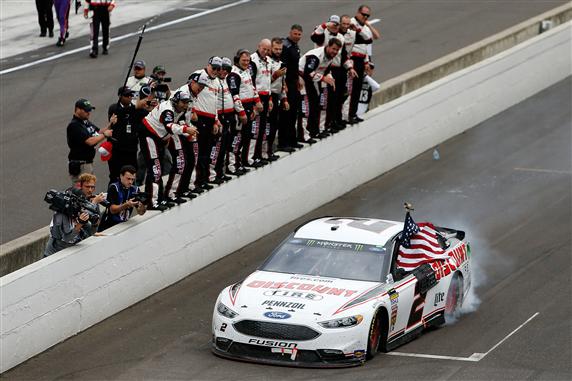 Could Keselowski step in and steal the title away from the drivers who have been thought of as the overwhelming favorites throughout much of the current campaign?

“Yeah, you know, trying to look at the next 10 weeks, the next 10 weeks are races upon their own,” Keselowski told reporters following his Indy win on Monday.  “There’s a lot of conversation based around momentum, and today is certainly great, but there’s not a lot we’re going to really take from it to Vegas other than the five bonus points and the money.”

But the 2012 Cup Series champion knows that momentum can turn quickly in the sport of racing.

“We’re proud of this win for sure, but it’s no guarantee for any success in the playoffs,” he pointed out. “We have to go out and earn it each and every lap of each and every race.”

So with that in mind, Keselowski has not exactly cleared off a spot on his mantle for the 2018 Monster Energy NASCAR Cup Series trophy just yet. The final race at Homestead-Miami Speedway is still more than two months away and much can and probably will happen between now and then.

“That’s a long ways from now, and I think you get to looking too far ahead, that’s how you get yourself in trouble,” Keselowski explained. “I think you’ve got to go one week at a time. And I know that sounds like the old football coach cliché, but that’s really the reality here because you can dig a big hole so fast when you get to looking too far ahead.”